How drastic is reversing the polarity of the power supply to a RAMPS board?

If I accidentally reverse the polarity of my power supply to the RAMPS board, what exactly will be damaged?

Will it harm my:

Will all or some of them be permanently damaged?

Polyfuses on the RAMPS

Fire appears to be the immediate issue, in the poly fuses.

Sooo I made the dumb mistake of reversing the polarity from my psu into the RAMPS 1.4. As warned the ramps did not like this and smoke began to rise from the board. I am pretty sure I saw smoke only coming from the two ptc fuses (big flat yellow ones).

According to this user, the MOSFETs and the Arduino Mega's regulator can be fried as well:

it most likely fried the mosfets next to the fuses and probably the voltage regulator on your arduino.

However, the fried regulator would only affect the Arduino's operation if powered through the power socket, or VIN (which the RAMPS board uses to power the Arduino Mega). However, via the USB it should still work. See this post, on the same thread:

The voltage regulator is only needed if you supply power to the arduino via the Vin pin or with a separate power adapter. The RAMPS board does supply the Vin pin with 12V.

So, you would probably have to rely on powering the Arduino via the USB and not the RAMPS

Regarding the Arduino, on Arduino.SE there are a number of users who have fried their Arduino in this manner, and many of them suffer slightly different failures, although most are centered around the regulator. One case I remember was that of a capacitor burnout, see Is my Arduino dead? - although the use case was different. There are many other cases on the Arduino.SE.

According to this post on RepRap - Reverse Polarity, there should be a reverse polarity protection diode (although it appears not to have work in the above example):

If it was a ramps, those have a reverse protection diode across the input that normally needs replaced after such an incident

The stepper motors themselves should survive, as should the stepper drivers.

However, each case can be different and it would depend upon the quality of the board (is it a cheap clone or branded?), and the quality/tolerance of the components used - these factors would determine where in the chain of modules the failure occurs. Obviously, the earlier the failure's location in the chain the better.

As an aside, this user fried their regulator (the fuses were fine) on a MKS Base v1.2 (not RAMPS), by reversing the polarity, which caused the stepper drivers to fail. However, replacing the regulator fixed it, see this post:

Replacing the regulator chip did fix the board.

Rather helpfully the self same user has posted an Instructables of the repair: MKS Base reverse polarity repair.

There is no protection diode on the RAMPXB. From RAMPSXB:

Do NOT reverse polarity on the input pins, as there is NO PROTECTION DIODE. Reversing polarity will not only fry your steppers and FETs, but may even damage your Arduino and possibly even your computer. Triple check to make sure the polarity on your power input is 100% correct!

This user on post #5 of Arduino Forum: Checking the RAMPS 1.4 did manage to fry their stepper drivers, but not due to reverse polarity, by from a loose wire:

I didnt connect the power backwards, but either I had a defective Mega2560 clone, or some stray bit of wire somehow shorted something out, and the Mega2560 literally went up in smoke (almost caught on fire !)

Every stepper driver was destroyed, but the power FET's and other components survived

Assuming the (most common and standard) RAMPS 1.4 board, the power input section looks like this: 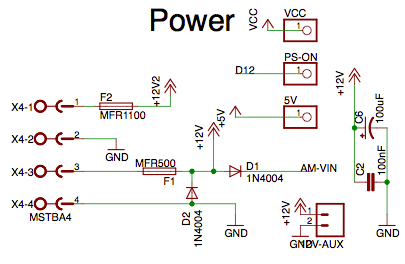 There are two 12V input sections: one for the heated bed (with an 11A fuse) and one for the rest (with a 5A fuse). If only one of the sections has reversed polarity (and the other one is connected correctly) the power supply (assuming a single supply is used) is shorted out directly through the board (without any fuses or any other protection). This will in principle not damage any components on the board, but it might damage the power supply or melt the wires. In the following, I assume both sections have polarity reversed consistently (or one of the sections is not connected at all).

The bed input section basically has no protection. If polarity to the bed is reversed, the bed MOSFET's body diode will conduct - basically shorting out the input through the fuse. The current that will flow will initially only be limited by the power supply's ability to supply current. Eventually the fuse will trip, but these poly fuses are quite slow and in the meantime it is possible the bed MOSFET will be damaged (which might cause it to permanently conduct, i.e. the bed might always be on, or the MOSFET might become a short circuit and short out the power supply even if the polarity is corrected).

The 5A section has a bit more in terms of protection. After the fuse there is a diode (D2) that shorts out the power supply if polarity is reversed. This is similar to how the diode in the bed MOSFET shorts out, but in this case the diode is dedicated for just this function. The diode has a relatively low forward voltage, lower than that of the MOSFETs for the heaters, so in principle these components will be protected. However, the diode is not really rated for the kind of current that would flow in this scenario, so components such as the heater/fan MOSFETs and stepper drivers might be exposed to a reverse voltage (albeit around -2V at most). They would probably survive.

As in the heated bed scenario, the diode D2 would probably be damaged - it would likely end up short circuited and thus needs to be replaced (or at least removed, but this is not advisable since it's required for polarity protection) before the board will function again.

The Arduino Mega 12V input is protected through a blocking diode (D1) which will fully protect it. This diode will not be damaged, because it won't conduct any current in a short-circuit scenario.

It might seem kind of strange a diode is used to deliberately short out the input in case of reverse polarity, and you might ask why the design doesn't simply use a diode to block the reverse flow of current (like is done for the Arduino). The reason for this is that all diodes have an associated voltage drop, which would cause a lot of power loss (especially for the heated bed), requiring a large diode with heat sink. The way the diodes are placed (i.e., shorting out the power rails in the event of reverse polarity) avoids this loss and still somewhat protects the electronics down the stream (even if the fuses/diodes are blown). Note that this is still a less than ideal solution, if you're trying to design your own reverse polarity protection solution then I would recommend to go with a MOSFET-based solution.

Not the answer you're looking for? Browse other questions tagged ramps-1.4 or ask your own question.

6
Arduino Mega voltage regulator overheats with RAMPS board
3
Can I use external stepper motor power and USB connection
4
Stepper motors are not working when connected with RAMPS 1.4
3
Reprap RAMPs over heating issues
2
RAMPS board - no power to heatbed
5
How to test Arduino Mega, RAMPS 1.4 and Full Graphic Smart Controller LCD?