Advantages of GT2 over a rack

Many 3D printers employ a GT2 band for the y-axis plate and the printhead in the x-axis carriage.

However, there seems to be the obvious disadvantages of:

Is there any particular reason why GT2 is used over a straight forward rack and pinion system? 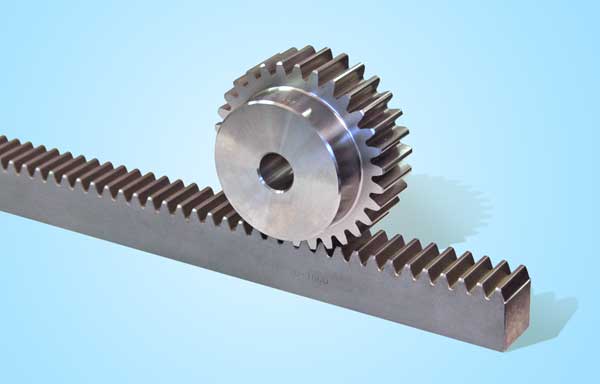 In particular, for the y-axis plate, as a rack would appear to me, be:

If the rack is made from aluminium, surely weight can not be a major factor... or can it?

Would the rigidity of the rack be less forgiving of an imperfectly aligned axis, something which the GT2 band and pulleys combination would not be so affected by?

Which of these factors cause designers to use GT2 en lieu of a rack?

1 Maybe constant adjustment is not required on an everyday basis, but the tension would still need to be checked now and again, whereas a pinion would not have this requirement.

With a belt system, the belt engages roughly half the pulley. This, and the tension in the belt, ensures the belt always engages the pulley tightly. A belt and pulley system is thus relatively forgiving.

With a rack and pinion system, only a few teeth engage at any given time. To avoid backlash and get the same kind of "tight" engagement, both the gear and the rack need to be made with very high precision. The carriage also needs to be very well constrained, because any wobble of the rack relative to the gear introduces backlash (or binding). Moreover, you also need to keep the rack and pinion well lubricated lest they wear out prematurely.

The answer so others can understand is that it's cheap and simple to run with a belt. Much of the 3D printers these days either stem from the sintering systems that were developed years ago and things that rose out of the RepRap community where a Lead Screw that had the precision needed to do proper 3D printing at decent speeds was out of reach for most of the community.

It's a bit of, "we've always used belts," and then people come up with all sorts of stories to validate the dubious take to begin with.

At one point in time (to be specific...around a couple of years BEFORE the question was asked here...) the costs of a lead/belt-screw system for anything other than a Z axis solution for a Cartesian or a Core-XY was prohibitive for a hobbyist or a system bought off shelf or build by them.

It was too hard and expensive to get straight enough parts with precision to actually make anything other than small toy systems with those. We wouldn't get into racks as they were even MORE expensive. With the precisions we were previously working on and with in the community at the time this question was originally posed, it was something that only made sense for select solutions.

As you scale larger (Hey, we're now professionally making HUGE parts with this stuff) it makes much, much more sense. For certain classes of manufacturing...it actually makes sense with certain filaments to make short run parts for almost ANYTHING, including things in the automotive space. At that juncture, prototyping, fixing "impossible" to repair situations on older cars, etc. makes some sense to get more precision or vastly larger size. Desireable becomes the ability to make printers with volumes up to 2 meters in size. Professional space? Maybe. But telling people that a pinion isn't making any sense? Heh...hardly. Same goes for lead/ball-screws. Several have made incredible printers fairly cheaply that can print seemingly impossible print runs (Hung at a 45 degree angle in mid air and print...) with some of this stuff. Is it cheaper? No. Does it make sense? Possibly. Especially if one wants to DIY a massive print volume printer (waves hand). I want a meter and a half cubed on a side print volume that I can enclose to crank out ASA prints of Smart body panels, for example... You're not getting that with belts- too stretchy, even with PU steel core belts.

Frame it in from a relative cost perspective (It's only going to be about 25% more costly on a DIY or commercial product with a speed upside and precision that might make it WORTH that...but understand that an Ender 3 designed that way will run 350 dollars instead of the 200 or thereabouts it currently runs) and you're going to be more realistic and honest on the question's answer. Saying it isn't practical...even from when the post originated isn't being exactly forthright in this day and age- and disregards that a person MIGHT just be willing to spend the more money for the precision, etc.

11
Are there practical reasons to NOT use a stepper motor with lead screw for the X and or Y axes?
9
Z axis top brackets, of P3Steel, differ between v1.x/2.x and v4
5
Why not use GT2 en lieu of a Z-axis threaded rod or leadscrew?

6
What are the advantages/disadvantages of using synchromesh cables instead of belts?
5
Why not use GT2 en lieu of a Z-axis threaded rod or leadscrew?