Folgertech FT-5 : Does not seem to be reading G-Code correctly

I recently purchased an FT-5 from Folgertech and finished assembly about a week ago. I have yet to accomplish a successful print. It seems like either the file is not being sliced correctly, or that it is possibly reading the G-code incorrectly. It will lay down the first perimeter layer of the part and then shift down the build plate a few mm in the y-direction, extrude another perimeter layer and then repeat. I have tried printing from an SD and through USB using Cura as the slicing software, with the same results.

All of the mechanical movements and offsets seem to be correct. The printer connects to Pronterface without issue. It also homes fine from the machine and USB and moves where it should during these processes. Again, it seems to be that the issue is when it tries to interpret the G-code. I have tried multiple G-code files from different sources as well, still with the same luck.

If anyone has experience with similar issues or can offer any help, it would be greatly appreciated. I have no clue what could be going on! 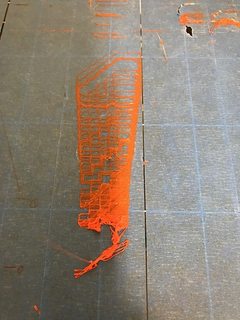 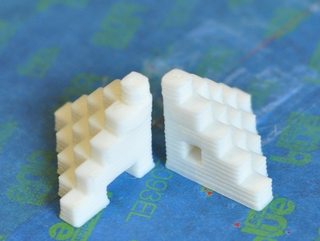 The image shows that somehow steps in Y direction (under the assumption that you have taken the photograph from the front) are missed.

Missing steps can be caused by too high settings for acceleration and jerk, too much friction on the undercarriage or the belt assembly, undercarriage catching something at a certain point, too less current through the stepper.

You could increase the torque on the stepper by increasing the Vref of your stepper driver is you have separate stepper driver modules, or a adjustment screw on the printer controller board. Furthermore reduce the acceleration and jerk settings and check the undercarriage for stick-slip movement by disconnecting the belt, then reconnect the belt and check for friction of the pulleys.

Not the answer you're looking for? Browse other questions tagged g-code printer-building electronics calibration folgertechft-5 .

6
Slic3r under extrusion
5
What does Marlin's G30 code do?
4
Selecting G-code files from SD with serial
9
Extruder motor does not turn
4
Stepper motors are not working when connected with RAMPS 1.4
3
Extrusion test cube resulted in one wall being thicker
6
How to post-process G-code to make prints faster using splines and arcs?
0
Ender 3 Pro not interpreting G-code correctly?