Is it safe to print a rotor insert for a centrifuge using a makerbot?

Laboratory centrifuges have buckets that hold the sample tubes in inserts.

The buckets are the black things on the rotor in the upper left corner holding the bottles. Examples of inserts are shown below (the colorful containers with slots for tubes). These fit into the buckets and I'd like to print them since these are expensive.

Is it safe to 3d print these using a makerbot given the g-forces these rotor inserts will be subjected to (potentially 150g's under our settings), or will the inserts deform and unbalance the rotors under the stress?

Additionally, is the precision of the printing good enough that the inserts can be expected to be well-balanced (the correct weight, with a symetric design having even weight distribution)?

We have a basic makerbot that makes little plastic robots. 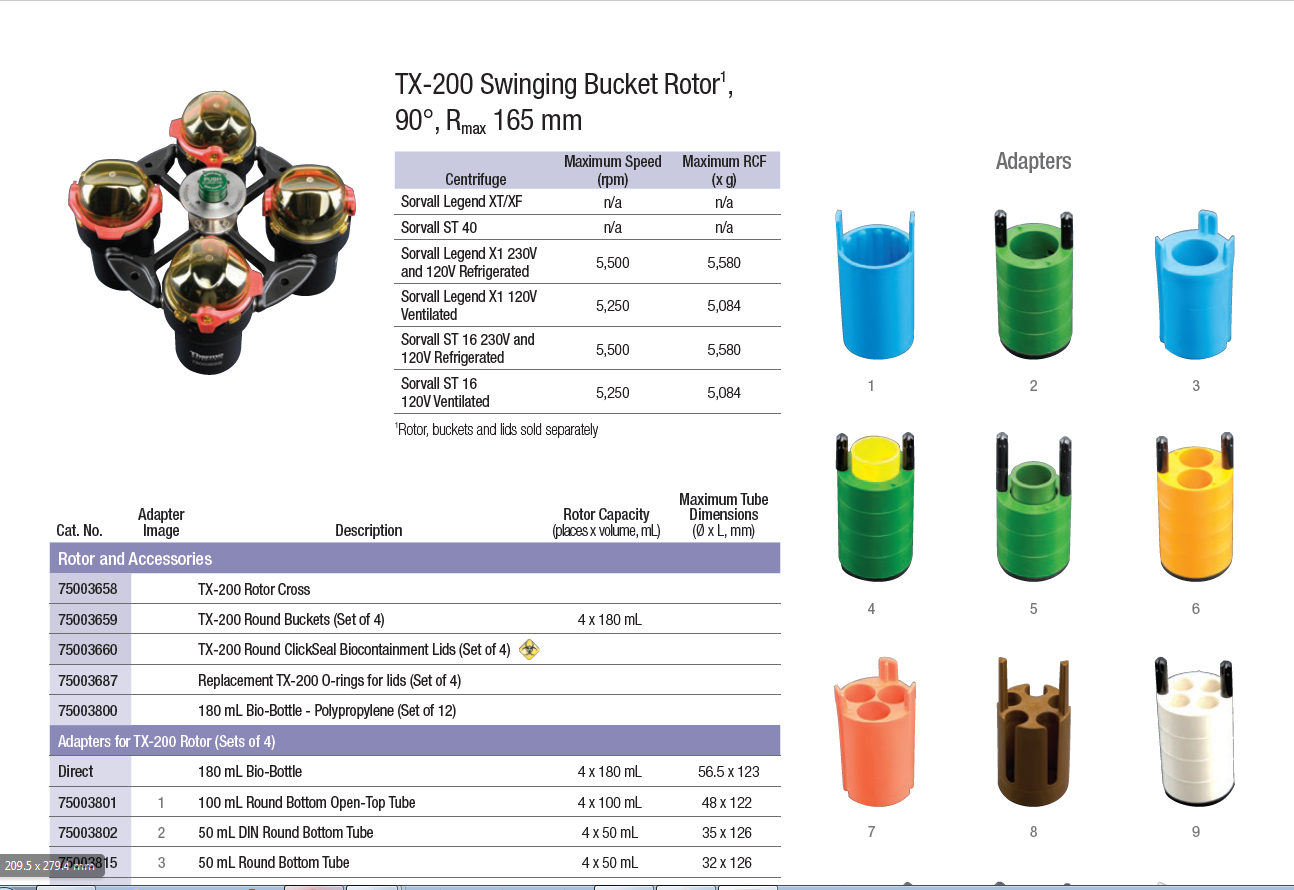 It's difficult to determine if the buckets are fully enclosed, but I suspect that they are. The enclosure into which the inserts are placed will provide some structural support.

3D printed objects have relatively low torsion strength, but a reasonable compression strength, especially with high infill levels. One could consider that the item placed into the insert will transmit force to the bucket, but likely not compress to the point of destruction.

Allowing also that the forces on a swinging bucket centrifuge are "downward" or when in use, "outward," the primary location of force will be the bottom of the insert you create. It appears that the main function of the insert is to keep the tubes separated, rather than to keep them supported.

Create your inserts, but leave an open bottom. Attach a suitably strong panel to the bottom of your created model with epoxy.

Another thing to consider in this project is the mode of failure. What can go wrong? The tubes in the insert should not explode, but if they do, is it merely cleaning up that follows? I suppose one aspect of the inserts is to keep the tube walls in column, to keep all forces linear to the tube cylinder, rather than out of line. It's easy to keep pennies in a stack under pressure, but don't push on them edgewise.

You can and should perform a test on a 3D printed insert. Make one that is relatively flimsy, say a six-tube unit and spin it without tubes in place. Test it prior to the spin for tube fit, then test it after the spin. If there is deformation, you would not be able to insert the tubes after the spin.

It is my understanding that you are looking to print the insert not the gimble bucket. The gimble bucket portion would be difficult and have high risk. Fdm 3d printing looks like it would be a good solution for the inserts.

3D prints have a high strength-to-weight ratio especially in compression and will easily hold their weight and 150g. If the insert is properly drawn in cad with good tolerances the wall and floor of the gimbal bucket will help support the insert. You can experiment with infills but i am sure anything upwards of 30% will do well.

In my experience with printing on a reprap fdm printer, the same gcode and same fillament yeilds exactly the same weights. If you switch fillament types, have some extruder hangups, or modify the gcode and have some small variation; just hit the top of the heavy ones with a belt sander till they all measure the same. Make sure to not sand the bottom because the distance of the sample to the bottom of the gimble bucket needs to be consistent.

The primary printer I use is a makerbot, and my gut is saying no.

150G's of loading even in the XY axis seems pretty excessive for a part made on a Makerbot. Also, given that this is a rotational, the weight and balance will need to be held to a pretty high tolerance otherwise you'll end up having an off-balance centrifuge which could damage a pretty expensive piece of equipment. Admittedly I haven't checked the reliability for weight and balance of a part I've made for the loading condition you'd be going through but I'd be pretty hesitant about trying to run any FDM printed part under a loading case like that Makerbot or a high end printer given the speeds you'll be at.

If it's your only option though, I'd suggest running your centrifuge at a very low speed first with the part in it and check it to see if you're picking up any transient vibration from it. Increasing the speed as you feel comfortable. My gut says that it'll fail before getting up to full speed from out of balance CofG of the part and the centrifuge starting to shake. Sounds terrifyingly fun to try though. IF you do try and run it,c an you post what happens? I'd be very interested in hearing the results.

Not the answer you're looking for? Browse other questions tagged makerbot safety print-strength or ask your own question.

30
Is 3D printing safe for your health?
7
Print sketchup files (STL) on makerbot
2
How could I keep the material on the print plate from bending up on a makerbot 2?
3
Creating positives for a food-safe silicone mold: safe?
0
Makerbot Replicator 2 Halts during print
6
How can I print gears using very high resolution material like nylon
4
Using a MakerBot Replicator 1 dual (or clone like FlashForge Creator) with Cura
3
Makerbot Replicator (5th generation) poor print quality
3
Is PLA safe for masks?