Embedding nuts and washers into print

I am creating a 3D printed part which will act as an attachment between a plate (actually a strain gauge) with two M2.5 bolts and a 2kg load with a single M4 bolt. I wouldn't be happy with tapping a screw thread into the print itself so I want to try embedding the nuts into the print itself - so I'll pause the print at the right layer and then insert the nut and, hopefully, the print will resume.

I'm wondering is it worth also including washers? It's a major pain because, while a nut can be captive in a hex space, a washer is circular. So it needs to be glued down on insertion in case it rotates while the printer is printing on top of it.

For a 2kg load I don't believe the nut will attempt to pull through the part but there isn't a whole lot of support between the bore hole and the edge of an M2.5 nut though, only about 1mm.

Edit: I'll add an image of my initial design. The strain gauge is one of a set pulled out of a weighing scales (from Lidl, €5.99. You can buy each separately on the internet for 20 euro, so I saved 74 euro!). The gauge itself is mounted on the narrow "neck" of the gauge. The whole block will drop into a holder that grabs the outer edge of the gauge. 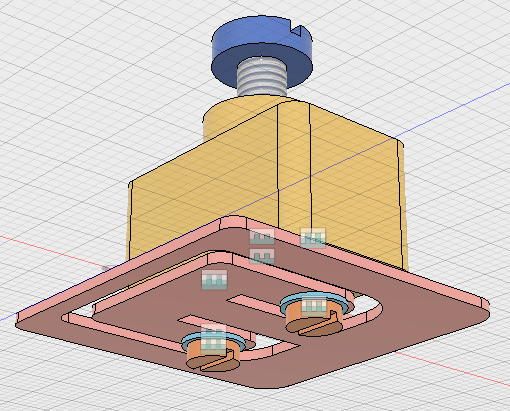 It could depend on how well your printer-filament type combination can bridge. If you can generate bridges wider than the washer diameter, then print not only the hex recess but a disc recess for the washer, then print over both.

However, my preference would be to redesign the part so that the washer&hex nut are on the far side of the part so that you don't need to deal with printing over&around them. This has the added advantage that you can replace the nut if it ever gets worn or stripped.

I've had good luck with just leaving a hex-shaped hole in the print, and press-fitting in the nut afterwards. You'll want the axis of the bolt to be along the z-axis, and to use a fair amount of infill and shells. I usually use PLA, so YMMV slightly.

You may also want to consider your strain gauge setup carefully. If you're doing something like making a hook out of the ABS and the plate is acting as a lever arm, you need to make sure the lever arm length is the same every time, or your calibration will be wrong.

There isn't any structural issue with having it allowed to rotate. If you were to print the part without the washer embedded and then put it on afterwards the washer would still be free to rotate. Friction from clamping would hold it in place.

Ideally you want your washer to be in contact with your nut to properly spread out the loading of the bolt compression to a larger area (the purpose of a washer). If you put the part between the nut and the washer then the washer is effectively acting as a spacer and your part is being loaded only where the nut contacts it.

If your nut will be exposed, you can simply insert it into the printed cavity and then seat it in place by heating it with a soldering iron.

Not the answer you're looking for? Browse other questions tagged abs or ask your own question.

7
How to minimize damage when removing an ABS print from a heated glass print bed?
9
Why is my print displacing along the y-axis by 2-3 cm?
2
What is PEI+PC 3D Print material? ISS 3D Print Contest
6
Large flat ABS print curling during cooldown
7
How many grams will be used in a print
5
Weird ripping and warping of ABS print
4
Ramps 1.4 and extruder
3
What infill settings and material type do I need?
3
3D Print Enclosure
2
What kind of paint and varnish can be used with ABS?