Delta printer not responding to changes in DELTA_RADIUS

As mentioned in my previous question, I have some bed-levelling issues with my printer. Following the link in @tjb1's answer I figured they were all about to be solved - just follow the steps and bim, bam, flat printing aligned with the plane of the bed. I was wrong. Firmware is Marlin 1.1.0-RC8

DELTA_RADIUS is DELTA_SMOOTH_ROD_OFFSET - DELTA_EFFECTOR_OFFSET -DELTA_CARRIAGE_OFFSET To correct the problem, the best course is to change one of the variables set earlier to force the value of DELTA_RADIUS to increase(to lower the extruder nozzle) or to decrease (to raise the nozzle).

You may have to repeat this a few times with smaller changes to DELTA_RADIUS, but eventually, the drag on a piece of paper should be the same at all four locations. Now the printer knows how to print flat at a given Z height.

So I did that. It's about 5-6mm high in the center of the bed. On point in front of the 3 towers. And it stays pretty much there (less than one 'precision' business card movement, if any) when DELTA_SMOOTH_ROD_OFFSET is increased, increased more, or decreased, for that matter - we started wondering if there was a sign error issue and tried the other way.

There is mention on the page of "turning off EEPROM" lest values be over-ridden by those in EEPROM, but the text appears to suggest that it's a Repetier-firmware-specific problem. So I was not expecting to have it in Marlin. Does it also apply to Marlin, or:

TL;DR mode: why would changes that should affect the "DELTA_RADIUS" to get the printer on plane with the bed be ineffective? 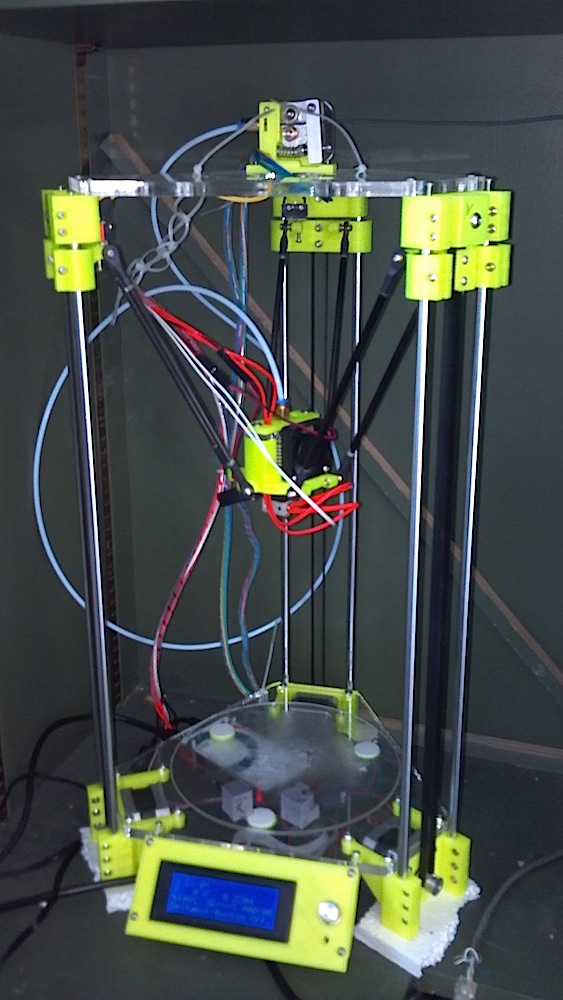 OK, so a little more poking around finds that it does seem to be loading values from EEPROM and ignoring the configuration files. So that's not Repetier-firmware-specific.

...and I found M665 in G-code which lets me just set a value for it, then M500 saves it to said EEPROM. And it's making a difference (so much of one that I may need to reset Zmax before I can actually adjust it all out as the endpoints on the bed are now off, but they are all 4 much closer to being off by the same amount!)