Sometimes supports are very difficult to remove (physically) when I print with ABS. The image below, from Thingiverse - MOF-5 unit cell, is after significant effort to remove the yellow ABS supports from a black ABS model. 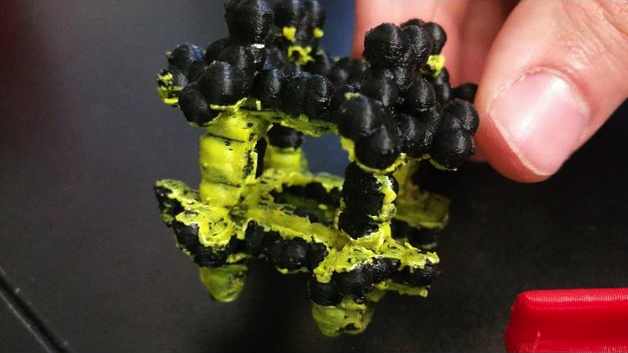 I've learned about polyvinylalcohol (PVA) as a 3D-printing filament which is soluble in water. It seems like a great option for dual-extruder printers, where you can print the model with ABS or PLA and the supports with PVA, then throw the whole thing in water and let the supports dissolve.

I've considered other options since PVA is ~4x more expensive than ABS.

Doing a PLA print with ABS supports, followed by dissolution of ABS with acetone, is my best idea currently.

Has anyone found success with another option?

I've had great success printing with HIPS (high-impact polystyrene) as a support for both PLA and ABS. Most sites recommend it for use with ABS because the materials melt at similar temperatures and work best with heated beds, but I've had good luck using it as a support material with PLA on a bed at 60°C. It doesn't stick as well to PLA as it does to ABS, so supports tend to peel away very readily. The downside is that, if you need the support to anchor your print at all, it doesn’t really stick well enough to accomplish this task. For that, you must pair HIPS with ABS.

When you print with ABS or have complicated interwoven support structures, HIPS can be dissolved with D-limonene, a citrus based cleaner sold under various names like Citrisolv (others exist), or with dipentene (a mixture of L and D-limonene that doesn't smell as pleasant).

Regarding cost: I've found HIPS to be slightly more expensive than PLA/ABS, but only 1.5x the cost, not 4x like PVA. Additionally, it isn't hydroscopic in the same way as PVA so it lasts longer out of the package. Since you're using it as support, you also tend to use far less filament than you do for the main print (sparse support structures as opposed to solid print structures).

Water-soluble alternatives: There are a few proprietary blends of polymers sold by the big commercial printer manufacturers (3DSystems, Stratasys) that only work in their machines… these are generally soluble in basic solutions (water + sodium hydroxide or sodium carbonate). These are usually very expensive and you'd have to rewind the filament on a spool, as they come in cartridges made for specific printers. You'd also have to experiment with the right build conditions and solution blends to remove the material afterward. Airwolf has a support material called Hydrofill that purports to be soluble in plain water… I'm not sure how this is different from standard PVA, though I assume it is different. Hopefully more companies will work on developing water-soluble options to help us keep the 3D printing world full of renewable, less-environmentally-harmful options for filaments (both print and support).

Ultimaker now has a material called Ultimaker Breakaway. After using it for a few models, it works remarkably well, allowing me, for the first time, to print nice rounded surfaces on the bases of my prints. It really does just break away from the surface, much like HIPS but without the lack of adhesion problems between HIPS and PLA.

I haven't tried this myself, but the recommended way I've seen for dealing with the high cost of PVA is to print the support structure in ABS, PLA, or something else cheap, and print only the interface area (the top of the support where it meets the model) in PVA.

I believe this is on-topic because it describes my experience using PVA in a Prusa i3m3-MMU2 machine.

My experience has not been good. I started with a new spool, and dried it between attempts.

The problems may be specific to the Prusa MMU2 printing process, but some are intrinsic in PVA, or at least the PVA filament I've been trying, PrimaSelect PVA+ (link is for reference only. I have no skin in this game.) Aspects that may carry forward to non-MMU2 machines include:

Perhaps unique to the Prusa i3m3-MMU2 machine, these lead to some specific problems:

This is not a negative review of the filament itself, or of the Prusa i3m3-MMU2. I may be doing something wrong, and would love to know better. I am quite happy with the MMU2, and have tuned it so that it works very well with PLA filament. This is the result of launching into soluble support, which is a feature I strongly hope to use reliably.

I am still exploring alternatives.

Not sure if frame challenge is on-topic here, but have you tried using different support options in your slicer? In Cura, I've found the experimental support tree mode both reduces the material usage a lot and gives supports that are easier to remove, at least for geometric (vs "organic", where it's sometimes good and sometimes bad) models. Turning off walls for normal (non-tree) support (infill and roofing only) and/or using a thinner line width than your nozzle can also help with removal but whether it provides sufficient support depends a lot on your model's geometry.

While I haven't used PVA yet, think of it this way, it may be 4x the cost but you use significantly less material for support structures even if you have a lot of support.

Not the answer you're looking for? Browse other questions tagged filament pla abs support-structures support-material or ask your own question.