How to print a two color part with only one extruder

I'm planning my first project. I want to print an iPhone case with a flush letter on the back, but I want the letter in a different color (single extruder printer). The thing is the two colors will be on the same level. Do I create two separate models, import them to a single model, mesh the parts and somehow specify which one to start on, then just change the filament when it's done with the first section? Will the letter be loose fitting in the cut out? Or will I need to print them separately and glue them together?

What is a good slicing software to accomplish this?

What you ask may be easier than you think. The slicing software is unimportant, generally speaking. Consider especially that your requirements fit the solution spot on.

Take a look at this thingiverse snowman. 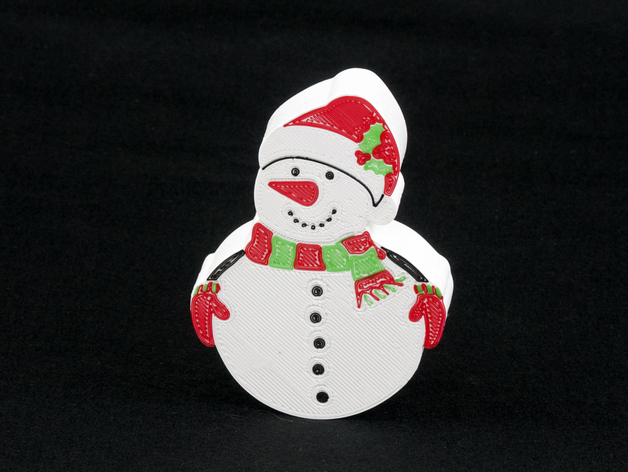 You would create a model with the necessary shape for your lettering and insert the appropriate color for them. Print that model but leave it on the bed. If the bed is heated, all the better, but don't let it cool to the point of release. If it's not heated, the adhesive should hold it until project completion.

For the main background color, your model would be normal but with a single layer subtracted at the base. The subtraction would have to be the shape of the lettering. Consider that you're creating indented or recessed lettering. Use appropriate modeling techniques to perform this action.

Keep in mind that you'll want the lettering to be mirrored, as you're printing it "upside down" on the build plate.

Swap out the filament to the main color and print.

I've created at least one of the snowman pictured and it came out quite good. The layman will not be as astonished as someone familiar with 3D modeling and printing, however. You get a better appreciation when you know what goes into the project to get this result.

EDIT to add more info, rather than fill the comments:

The above method works only because the inlay is a single layer deep. If your slicer supports changing layer thickness during a print, you could print the first layer at the max for your nozzle, say 0.3 mm then set layer 2 and upwards to the resolution you desire for the majority of your print. I use Simplify3D which supports such actions. I'm not sure of the others.

Relevant to the questions posed in the comments, your modeling software may be a factor in this process. The modeling software will create/assign a pivot point or some other name to a location of reference in the model. The slicer will use that to position the model on the bed.

Here's a concept I would use to perform this task. Start with your single layer lettering, ensuring that the thickness of the letters will match your first layer height. Save the model as an STL file. Leave the lettering on the screen in your modeling software.

Create or import the case file. Position it as you wish relative to the letters. Of course, both models will be flat on the build plane or all bets are off. Use the lettering in a boolean subtraction to remove the shapes from the phone case model.

If the above does not remove the lettering model, delete that and you have the recess. Save this model in STL.

When you load the models in the slicer, they should drop into the same location relative to each other.

If you require the letters to be thicker than a single layer, one of the options you have is also in your question. Create the letters in the thickness you wish, use them to create the recess in the case and print separately. In so doing, you will be counting on the printer's ability to make clean bridges. The letters may fit cleanly, may have some play or slop, or be too large to fit easily. It would behoove you to make a test piece or two, perhaps a simple slab with one or two letters to see how that concept works in the real world. I was pleasantly surprised to see how well the public library's genuine Prusa i3 MK2S performed a challenging bridging operation.

I apologize for overlooking the reference to first project. With that in mind, I would consider that this is a slightly advanced project. Your modeling software and modeling software skills will obviously come into play here and is a separate subject/question/topic for discussion.

Not the answer you're looking for? Browse other questions tagged 3d-models filament software slicing multi-material .

11
Multi-color printing with desktop 3D printer?
5
Convert an STL model to a two-extruder model
27
What is PLA+? How is it different from PLA?
19
How does one use a heat tower?
0
Need help to only print one small part
2
Gap between infill and walls for one filament only
4
How do PLA, PETG, TPU, ABS and/or nylon work together in a single print?
0
Diamond hotend with single extruder motor
1
Dual extruder with gear shifting
1
Can I build a 3D image of a warrior type character if I only have one image of that character from one frontal view