I'm trying to create a 3D printer based on this instructable, EWaste 60$ 3DPrinter.

I have followed the steps provided there, and I'm facing the problem that the x-axis isn't able to move, i.e. the motor works fine but the z-axis part which is connected to x-axis doesn't move left and right. I have tried the following already:

Any help on this would be appreciated! 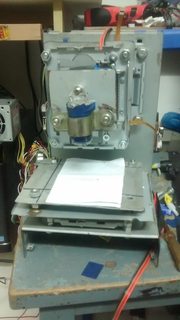 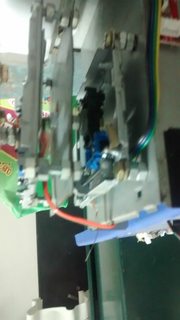 Firstly, the X-axis should not be attached to the Y-axis.

Secondly, with respect to the Z-axis not being moved by the X-axis, it sounds like the X-axis stepper either:

I would suggest removing the Z-axis from the X-axis CD carriage, in order to reduce the mass and therefore the power required to move it, and test the X-axis in isolation. If it moves left and right correctly, then it is not dead (obviously). If it does not move, then try adjusting (increasing) the current to the stepper motor, by adjusting the EasyDriver (assuming that you are using an EasyDriver stepper motor controller): 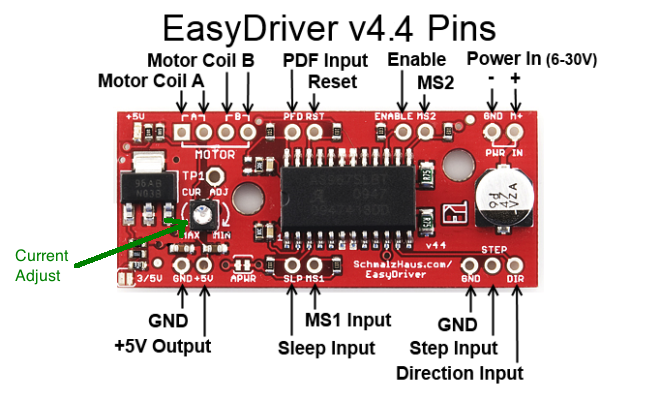 If it still does not move, then replace the stepper (or the whole X-axis CD-ROM drive, which is probably easier).

Then replace the Z-axis and test the X-axis movement again. If it does not move then the stepper does not have sufficient power, or strength, to move the mass of the Z-axis and, again, will probably require increasing the current to it, by adjusting the EasyDriver (as above):

Having re-read your question, you state that the X-axis stepper motor works fine. So, it could be that the mechanism to which the stepper motor is attached is broken (teeth, gears, etc.) and not moving the CD carriage correctly. Again, remove the Z-axis and check the mechanics of the X-axis.

If they are damaged, then you will probably need to replace the CD-ROM drive that was used for the X-axis.

Not the answer you're looking for? Browse other questions tagged diy-3d-printer troubleshooting e-waste or ask your own question.

1
Is a 3-D printer made from 3 CD Drives practically somewhat decent, being DIY and less expensive?

5
G04 dwell period control parameters
3
Layer shifting on product printing after raft support structure
1
Prusa i3 pro W - not extruding
6
Z-Axis does not appear to be working on Ender-3 Pro
4
Horizontal line z-axis not printing correctly
5
Ender 3 X-axis values are not correct
2
My printer is making mistakes on the right half of the print, but not the left
1
Problems with the right Z axis
0
Bed leveling problem
1
Sudden deterioration of print quality on Prusa i3MK3S+