What is PLA+? How is it different from PLA?

What is PLA+? How is it different than PLA? I'm looking for science, composition, formula, safety concerns (or lack thereof), etc.

I picked up a roll of PLA+ at Microcenter (their in-house Inland brand) because it was on clearance. I didn't even notice the "+" until I decided to try that color, and then I noticed it on the sticker. It prints well, feels like ABS, smells like PLA when printing, and I can use PLA temps on my printer. It sands better than PLA, and if I I hadn't noticed the PLA+ sticker, and the smell, I would think it was ABS. It will break its line into my printer like PLA does; ABS doesn't break if left alone. However, PLA+ lasts longer than regular PLA before breaking.

Getting info from the Internet

Aside from a few discussions on reddit (review, commercial introduction), I can't find anything about it.

Getting info from the Manufacturer

I went back to Microcenter and the guy that was there working the 3d printing section did not know what I was talking about.

I went to Microcenter another time and the guy in the filament area said that all of their PLA filament was now PLA+, and that the + meant it was to be used at a higher temperature. The boxes are labeled with 205 - 225°C. It seems that all the inland brand PLA I have is PLA+, save for the first roll I bought. It does not have any kind of temperature markings on it.

This question got some recent attention, so I looked to find the answer again. I found this article, which is a hot pile of !usefulness, giving no data, lots of opinion, and probably some direct insights from someone's marketing department.

These guys say it's good stuff, but nothing about the chemical or compositional difference between the two. When I find people talking about the difference (like on reddit), those are the details usually mentioned, which are vague, anecdotal, and opinionated, and could be clever marketing (could be, not guaranteed to be). One man's shiny is another man's matte for example.

Monoprice confirmed what I already did by reading the label and printing with it, but does mention TPU, which might be Thermoplastic polyurethane. No quantity or proportion or anything, and since they're the only manufacturer/reseller to officially say this, I consider it unconfirmed. One of the answers below says that PLA+ probably includes TPU or something like it, but that's conjecture or opinion by their own admission.

PLA+ is a variation of PLA that has added material in order to make the filament less brittle, have a smoother surface finish, and less likely to absorb moisture. Typically, TPU is added into the filament in order to achieve this property. PLA+ will have the feel and functionality of ABS without the smell. If you didn’t know better, you would think it was ABS. We suggest printing with PLA+ at 205 to 210 degrees Celsius and with a bed temperature of 45 degrees Celsius. PLA+ responds very well to blue painter’s tape and a glue stick to hold properly and not peel up when printing.

These people also ask what it is, but they're doing science about it circa 2014 to try to figure it out.

I'm not sure what to think of this manufacturer/seller's description. It sounds like they are implying that PLA has a branding problem, so they added a plus to it for a new formula to fix their branding.

PLA Plus is an enhanced version of our PLA that's less brittle and more durable. ‘Enhanced’ PLAs have a bad reputation, some are no better than PLA, some perform worse in some conditions. We’ve taken a different approach: our ‘regular’ PLA is regarded as the strongest pure PLA in the industry, it’s hard to improve on the best. But sometimes you need something a little more durable. Enter our specially formulated PLA Plus. Prints like PLA, but with better durability. Its available with their brighter color options!

I find a lot of articles/posts talking about "eSun PLA+" specifically. I'm starting to think that this might be the OEM and that other companies are selling it with their own branding, but that all PLA+ comes from the same place. I found their product page, and it says this, which mentions nothing about the formula:

Disclaimer: I am not affiliated with any linked brand or company, I just link to them for reference of the suggested print settings.

PLA is, by its definition PolyLacticAcid, a polymer of entwined lactic acids. It is commonly made from fermenting starch - not via Type I (alcohol) but Type II (lactic acid) fermentationuser77232, Wikipedia. Chemically it looks like this: 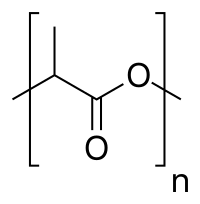 Usually, PLA sold under just the name PLA contains, besides PLA, additives to change the color from transparent to whatever color one is printing at. This can change the standard printing temperature depending on the amount, size and shape of the pigments embedded (see below).

Common Printing temperatures are listed by the manufacturers in the range of 185 to 210 °C. The color can have an influence on the printing temperature, especially for the difference between transparent and opaque filaments. While a heated bed is not strictly necessary, the bed temperature is usually quoted with 60 °C.

I myself print most PLA filaments at 200 °C and 60 °C bed, but for noncolored transparent filament, I had better results using 190 °C.

Note that not all PLA is just PLA! It is very likely that some PLA brands contain fillers and additives from the house without claiming to be a +-filament, indeed, additives precede the idea of PLA+, as the case with Tiertime PP3DP filaments will show.

Since back in 2012 or earlier, ABS made by Tiertime includes some unknown compound (possibly PC) that alters the best-result print temperature from the "normal" 220 - 240 °C to the much higher but narrower 260 - 270 °C band. Why this is done is a mystery among 3d-printing enthusiasts, but it might be either to get rid of any color-dependency of the print results or to make it harder to use generic ABS. Fact is, that this temperature was matching what was set as the (then unchangeable) standard temperature in the Up 1.1.7 software of that time.Angus aka MakersMuse & Tiertime Forums. The higher temperature hasn't changed over the yearsTiertime ABS. Indeed, the Tiertime PLA introduced in March 2014Tiertime is also quoted to print at higher temperatures than generic PLA, and had similarly a higher default temperature in the then updated UP-spftwareTiertime Forums, though I found listings from 200here & here to 215 °Chere under Technische Daten.

Now, what differs PLA from PLA+? Well, PLA+ is a modified PLA, which means that it has additives in it to alter its properties. What exactly is added depends extremely on the manufacturer, and no two PLA+ are the same.all3dp.

What is the difference?

All3dp claims, that most PLA+ would have a better surface finish than the PLA from the same brand. Because of the additives, they also usually print best at elevated temperature compared to PLA. Among various manufacturers, I saw 210–240 °CKodak PLA+, 190-220 °CSUNLU PLA+ and 190-210 °CeSun PLA+.

However, there is no uniformity in other effects on the filament. Some filaments would have less moisture absorption, a different stiffness or compressibility while others might have a higher tensile strength and feature an extremely glossy surface.

Most commonly, the claimed benefits lie in the fields of the filament's strength, surface texture and glossiness, the printability of overhangs.

PLA+ is not one product per se but a family of modified PLA. While you can print PLA+ with the same settings as normal PLA, the resulting benefits between different brands are much more diverse than with normal PLA.

Because of the fact that no two brands of PLA+ are the same (and the manufacturers are silent on what additives they use to change the properties), one should not rely on the same effects when switching between brands.

There’s no huge difference between both. The printing settings like temperature and printing speed are practically the same. But the PLA+ have a much better surface quality and it’s slightly more bright than normal PLA. Another difference is that the PLA+ it's more effective in bridges than PLA.

If you want to the comparison between PLA and PLA+ go right here, PLA vs PLA+ (short review). This post is an awesome experiment with both materials.

PLA+, depending on the brand, is probably a mixture of other plastics (things like TPU1) to help improve upon the weaknesses of regular PLA like brittleness and moisture absorbing. Or they simply used a higher quality PLA blend to create the filament.

I do not have a specific source except from collaborating with different materials experts such as Essentium Materials. TPU is a flexible plastic that can have different "hardness" levels.

PLA+ is a brand. Where PLA and ABS have specific chemical meanings (more or less... manufacturers already will have different additives or processes), the only real requirement for PLA+ is using some unknown quantity of PLA as a base.

Look at coffee beans as an example: we have Arabica vs Robusta. Arabica is usually considered better, for some definition of "better". (BTW: Starbucks serves cheaper Robusta). The relevant thing here is in many places you only need 10% Arabica content to label and market a coffee as Arabica coffee. The rest of the product could be... well, anything the maker wants to include.

PLA+ is similar. There's no real definitive meaning to it, beyond some measure of original PLA content and the hope you'll believe it's "better", and therefore maybe pay a little more.

The good news is, usually PLA+ really is better... at least so far. But as more people start viewing it as a real step up from regular PLA, it's likely we'll also start to see some shady business people pass off inferior product at PLA+. It's likely this is already happening.

Moral of the story: read the label carefully. And unlike coffee, which is a food and therefore better regulated, filaments have hardly any rules about labeling; there may not be a label to read at all, so be extra careful what you buy.

The PLA + that i use makes the support removal a lot eaiser, the support structurres for some reason dont fuse onto the part and they also seem more brittle.

Not the answer you're looking for? Browse other questions tagged filament pla filament-choice pla+ or ask your own question.

5
What is “HDPLA”, and why is it so hard to find out more about it?

9
Why does my PLA filament form a spiral shape and clog my extruder?
15
What is stopping us from mixing 3D filament colors in an Extruder?
4
Identifying PLA/PETG or ABS
7
ABS or PLA for structural printed parts?
5
What is “HDPLA”, and why is it so hard to find out more about it?
3
Removing pla from extruder
4
What is a masterspool?
1
Is lubricating filament a good idea?
2
Inland PLA+ stringing badly at manufacturer-recommended temperature ranges
3
What filaments allow air to pass but not water vapor?