How thin can my extrusion be from a 1.2mm extruder?

I always assumed that the smallest diameter that you could extrude was equal to the diameter of the extruder tip itself. Recently I heard that you can actually extrude a line that's as little as half the width of the nozzle opening.

Is that true in theory? In practice?

My printer's 0.3mm nozzle broke recently, and the only replacement on hand was a 1.2mm nozzle. The prints have been fast, but really coarse and imprecise. I've dialed the extrusion diameter down from about 2mm to 1.2mm for some smaller, more intricate parts, and it worked fine. Can I go down to 0.9mm or 0.6mm extrusion diameter without it screwing up my prints?

For this question, let's assume an FDM printer using PLA and/or ABS filament.

The main issue with very narrow extrusion widths (less than the nozzle size) is that you get really poor "nozzle squash." The plastic isn't pressed down very hard as it's extruded. That causes poor layer bonding and weaker prints.

The flow of molten plastic coming out of the nozzle must be drawn down by tension in order to end up smaller than the nozzle opening, and that drawing effect makes it difficult to get good contact with the previous layer. So you end up with a "stack of logs" structure kind of like this: 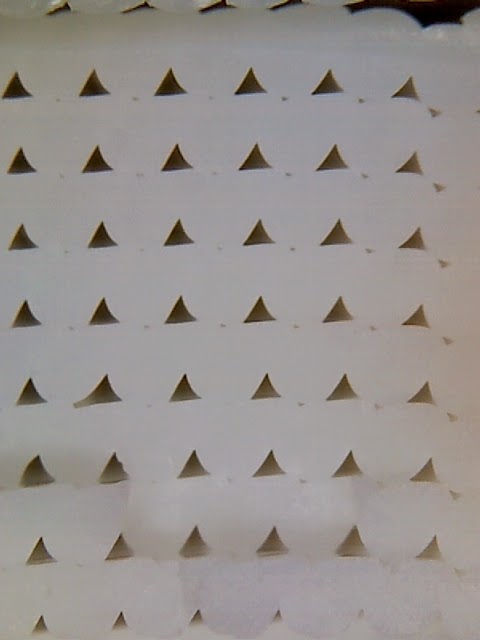 (This photo actually shows layer height = extrusion width = nozzle size, which is another no-no, but the end result is similar.)

What you want instead is something very "mashed together" and strong like this: 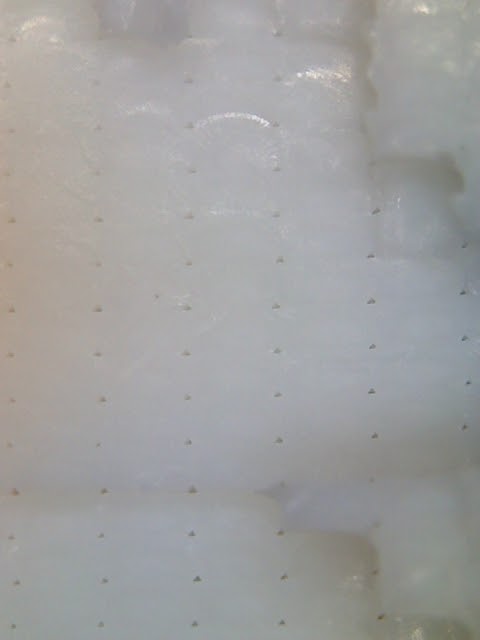 How finely the the strand can draw down -- versus smearing or breaking apart into blobs -- will depend greatly on the type of filament and the printing conditions. For example, nylon draws down extremely well because it experiences a large degree of strain crystallization, and actually gets stronger and stiffer as it's stretched. PLA tends to get more brittle when strained and may break into stringy blobs. ABS doesn't change terribly much because it's highly amorphous. Polymer type, blending agents, print speed, printing temperature, and cooling will control the drawing behavior of the filament.

Another factor to consider is what the strand spacing is within the print. If you set the extrusion width equal to half the nozzle width, depending on the slicer, adjacent strands may be placed with pitch equal or slightly less than half the nozzle width. So after the first strand is printed (say an unimportant inner perimeter) the next strand will be printed with the nozzle partially overlapping the previous strand. This effectively creates a constriction to force the plastic out of a smaller opening to one side of the nozzle, which is not too different from printing with a smaller nozzle. Subsequent perimeter strands may then tend to "heal up" even if the first is low quality. This effect doesn't completely fix the problem, but it helps account for why under-width strands seem to work better than they ought to.

Of course, even if the strands turn out ok, it's arguable whether there is any benefit. If the goal of a smaller extrusion width is more precision and sharper corners, you may not actually accomplish that goal. When the filament is being drawn down by tension in the cooling polymer, it may tend to "cut corners" and get pulled into a rounded arc when the nozzle changes direction. That may defeat the point of using a thinner extrusion width in the first place. Generally I only recommend using under-width strands to capture thin-wall detail that is only a little bit too thin for the nozzle, not as a way to improve overall print quality.

In comparison, having the extrusion width equal or wider than the nozzle ensures the plastic is firmly squished downward into intimate contact with the lower layer. You can fudge this a bit and still get decent results, but it's usually best to keep the extrusion width equal or larger than the nozzle size. There's no hard cutoff where it will / won't work.

Not the answer you're looking for? Browse other questions tagged print-quality extrusion nozzle .

10
How can I improve the overhang angles my printer can successfully print?

9
Which type of extrusion problem?
1
3D printer extruding too thick
1
How to fix bad extrusion on my printer
3
Can't seem to fix over extrusion
4
Ender 3 Pro Filament extrusion problems
1
Getting the Turnigy Fabrikator Mini V2 to a usable state
1
CR10 V2 under extruding and heating up too quickly
3
How to solve burnt blobs on Prusa MK3S (PETG)?
3
Can I print an object with thin walls?
2
Extruder stops printing before finishing first layer (Ender 3 v2 w/BIQU H2)