OpenSCAD to Flashprint ruins model based on number of fragments

I'm trying to print a cylinder with Flashprint. Problem is, that the .stl file i created (with OpenSCAD) is totally ruined once loaded into Flashprint. With ruined I mean the round outline is now with spikes and steps everywhere. And by loaded I mean directly after loading, not even creating the .gx files. The output of OpenSCAD looks fine, also in other stl viewers I tried.

I figured out the problem occurs more when using certain number of fragments ($fn). If its very small, loading works better. But for numbers that make it acutally look like a round circle (eg 50), Flashprint is unable to load them correctly it seems.

It's obvious that its no slicing or printing problem, but simply a loading one, since the shown object (which does not look any round) also prints the way it is shown in flashprint before slicing.

Does someone know a way to load a cylinder with flashprint correctly, or do I have to switch to different software? I already installed some but am unfamiliar with the printer settings which I do not know in detail. I really though a cylinder should'nt be too complex for any 3D software.

Here is the OpenSCAD Code for Cylinder, just create .stl and load into Flashprint to reproduce the Error: 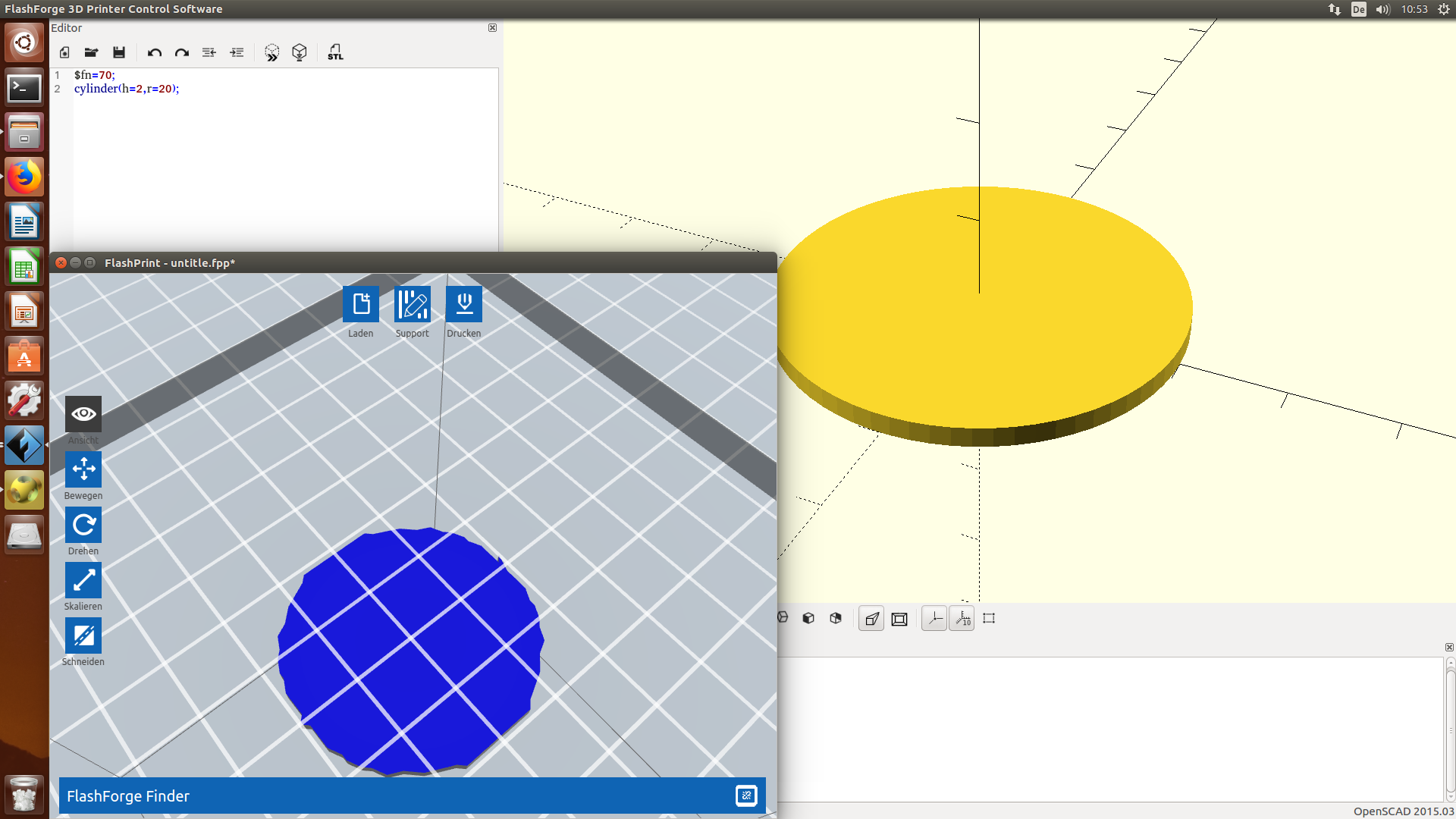 Your image is very helpful. I think you might find that the rendering in your slicer is intentionally degraded to minimize use of system resources. The image you see may not be an accurate representation of that which would be printed.

If you wish further confirmation, consider to create the g-code from the slicer and view it in a text editor. An even better option would be to use an online g-code viewer and observe the results of the created g-code.

The image above is the first line of print for a Marvin, showing that the base curves are smooth and clean. Your cylinder should appear in a similar manner, confirming that your slicer is degrading the image.

While my first try with slic3r was really bad, due the required manual setup and my lacking experience (which was the reason I really wanted to stick with Flashprint), I actually found a solution to my problem. Its more a workarround but im perfectly happy with it for now.

I just load the OpenScad .stl with slic3r, use it's "Export STL..." feature, and load the resulting stl with Flashprint. Looks like a charm.

So the problem is really the OpenSCAD specific .stl files being misinterpreted by Flashprint.

Hopefully this helps some of you as well and save you some trouble.

Not the answer you're looking for? Browse other questions tagged 3d-models software resolution or ask your own question.

3
How to enlarge a Sketchup Model
1
How to split a model in SketchUp for printing
2
CT Segmentation Model Intersection
4
Convert an STL model to a two-extruder model
1
How can I make this model?
4
Slicing adds holes/cracks to my object
1
Model stuck on base
5
OpenSCAD library for empty space/holes
3
Slicing directly from non-mesh data?
5
Creating “pie slice” in OpenSCAD?