Getting started: shell passes not fusing in x/y, and a slanted wavy pattern on vertical walls

I'm trying to find the main reason(s) for the imperfections I'm seeing in printouts from my printer. It is an I3 clone from Folger Tech. I got this printer from a friend who used it to print a larger one, so the mechanics are apparently fine to the point that they are capable of producing something of decent quality.

Filament: 1.75 mm black PLA from Janbex, unpacked three days ago, in "normal" appartment air since then.

Nozzle: 0.4 mm, apparently clean enough since I can push filament through the hot nozzle by hand and it comes out straight after some slight initial pigtailing. The nozzle had also been used for ABS earlier.

However, I have some trouble getting a 20x20x5 mm³ cube right. Two imperfections that bug me most are:

I tried a slower print speed and higher temperature. This part has been printed at 40 mm/s for infill and perimeter, external perimeters and first layer at 20 mm/s, 205 °C, and flow rate 110%: 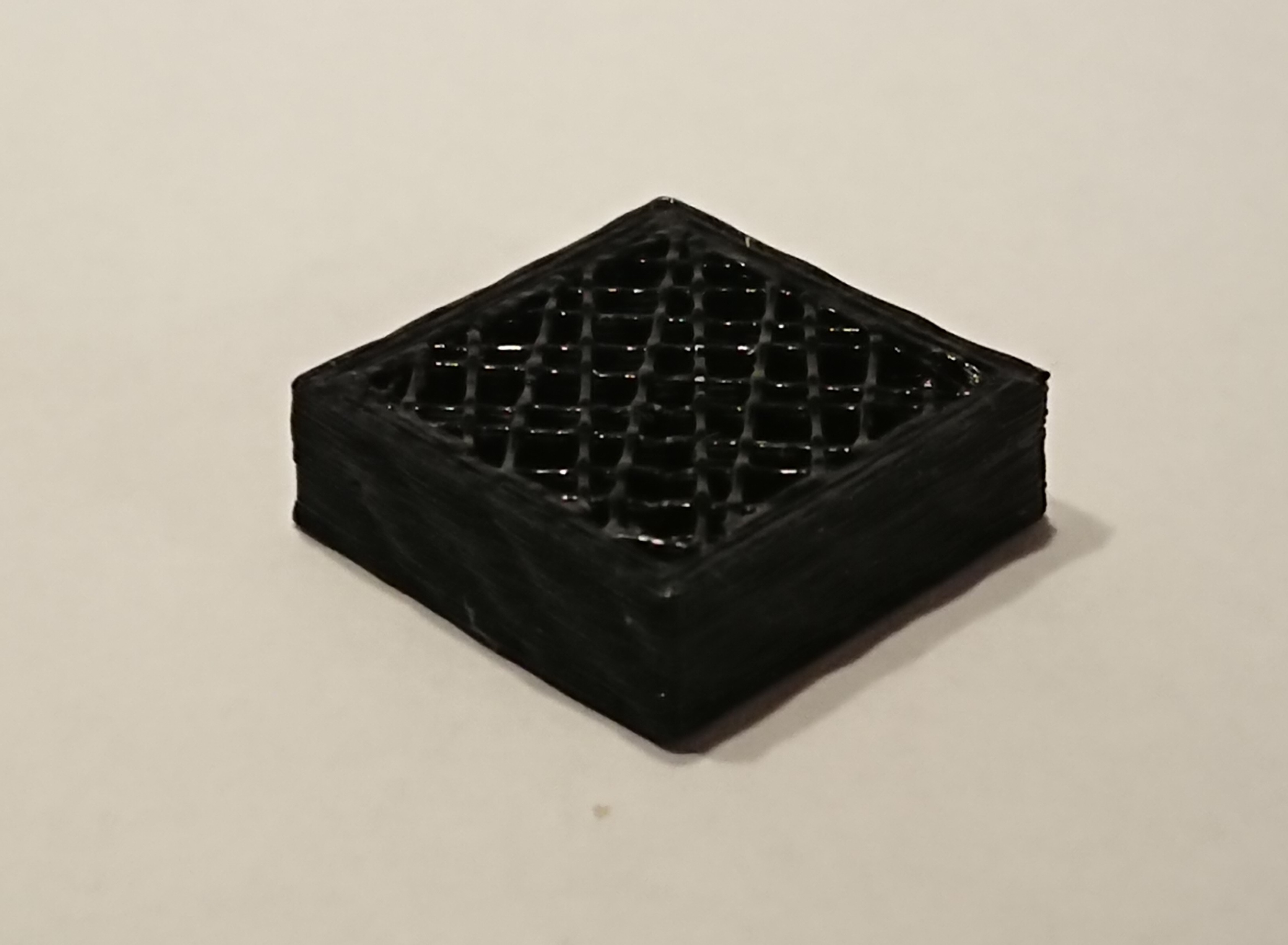 The full slic3r settings as they were appended to the generated G-Code:

What can cause this wave pattern? What I don't think it is:

I gradually raised the temperature until I reached 205 °C, because with my first prints the infill was just a mess of strings. Also note that I'm a beginner - this is the first part I'm printing.

As suggested by mac I printed a cube with no infill and just one perimeter shell. All other settings were as above. This took a while because I had to build a light box first to create this shot: 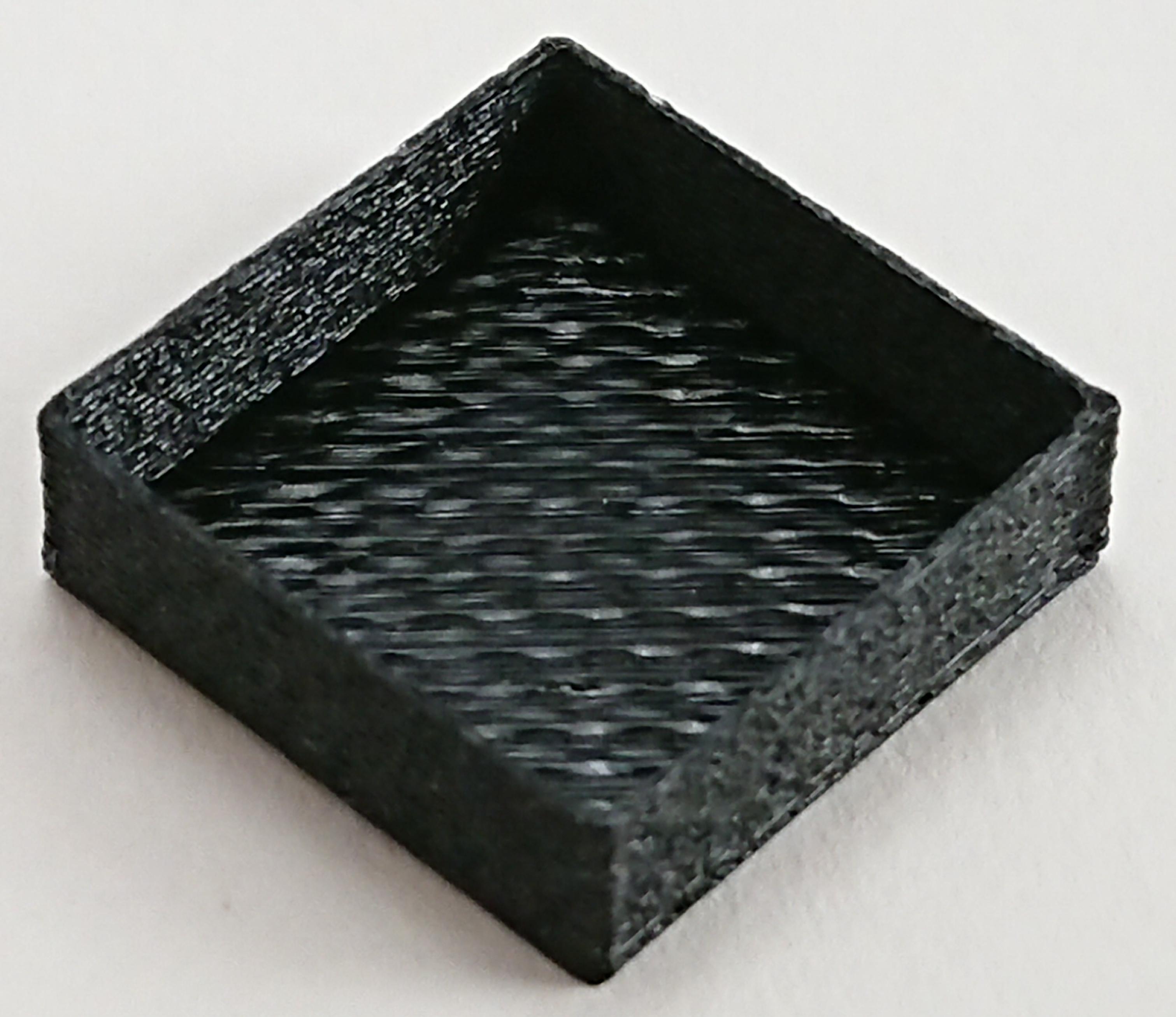 What I noted during the print: 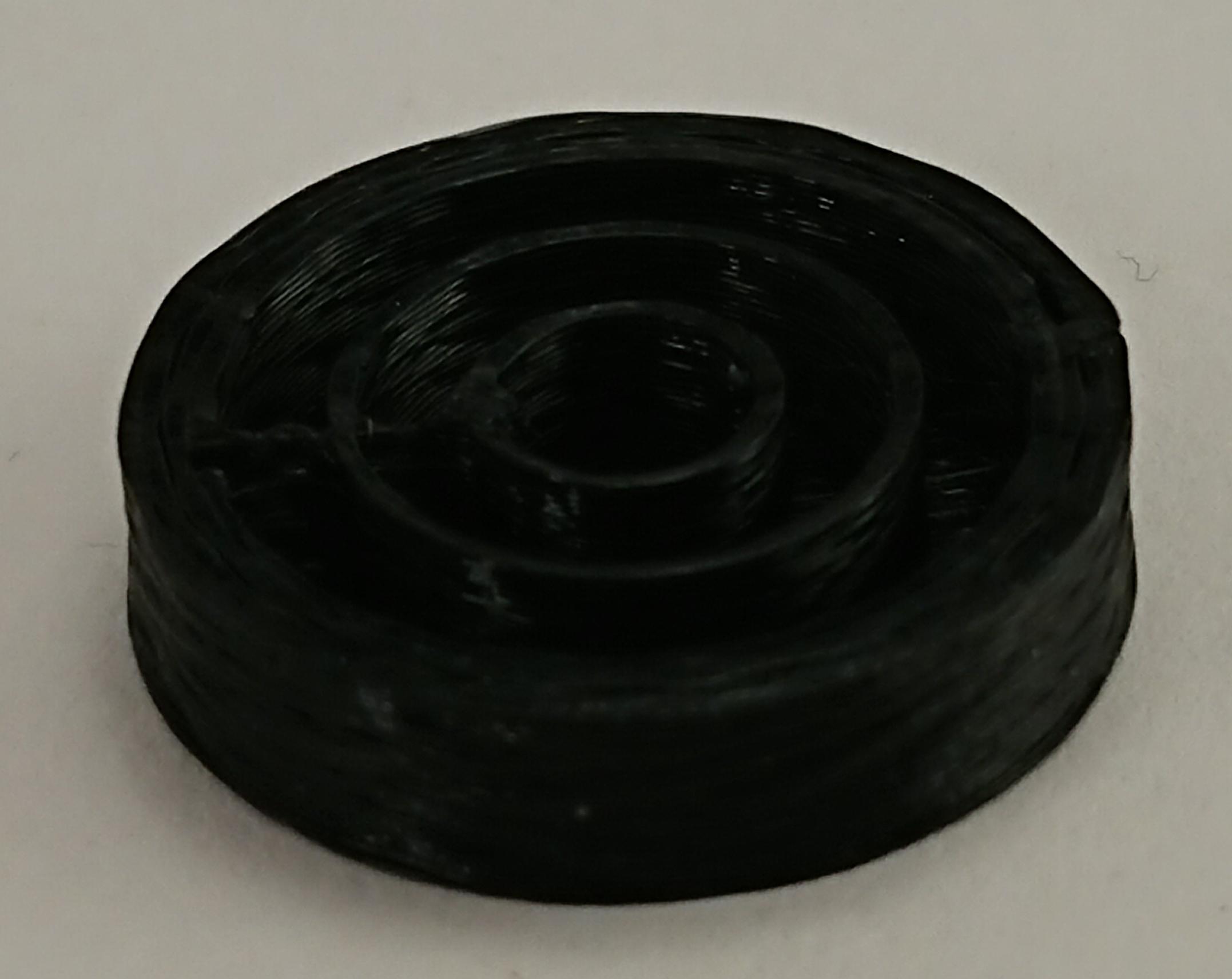 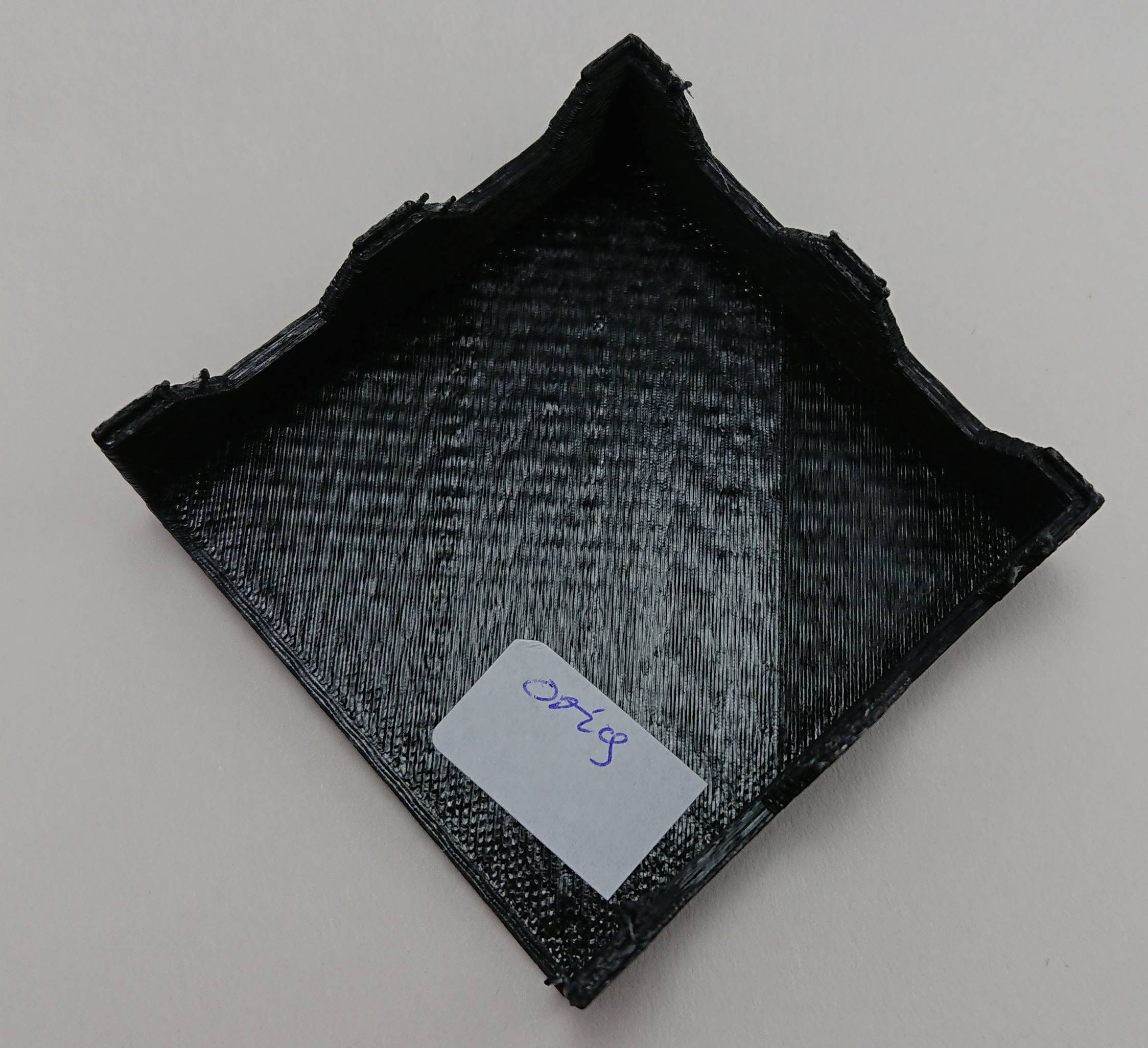 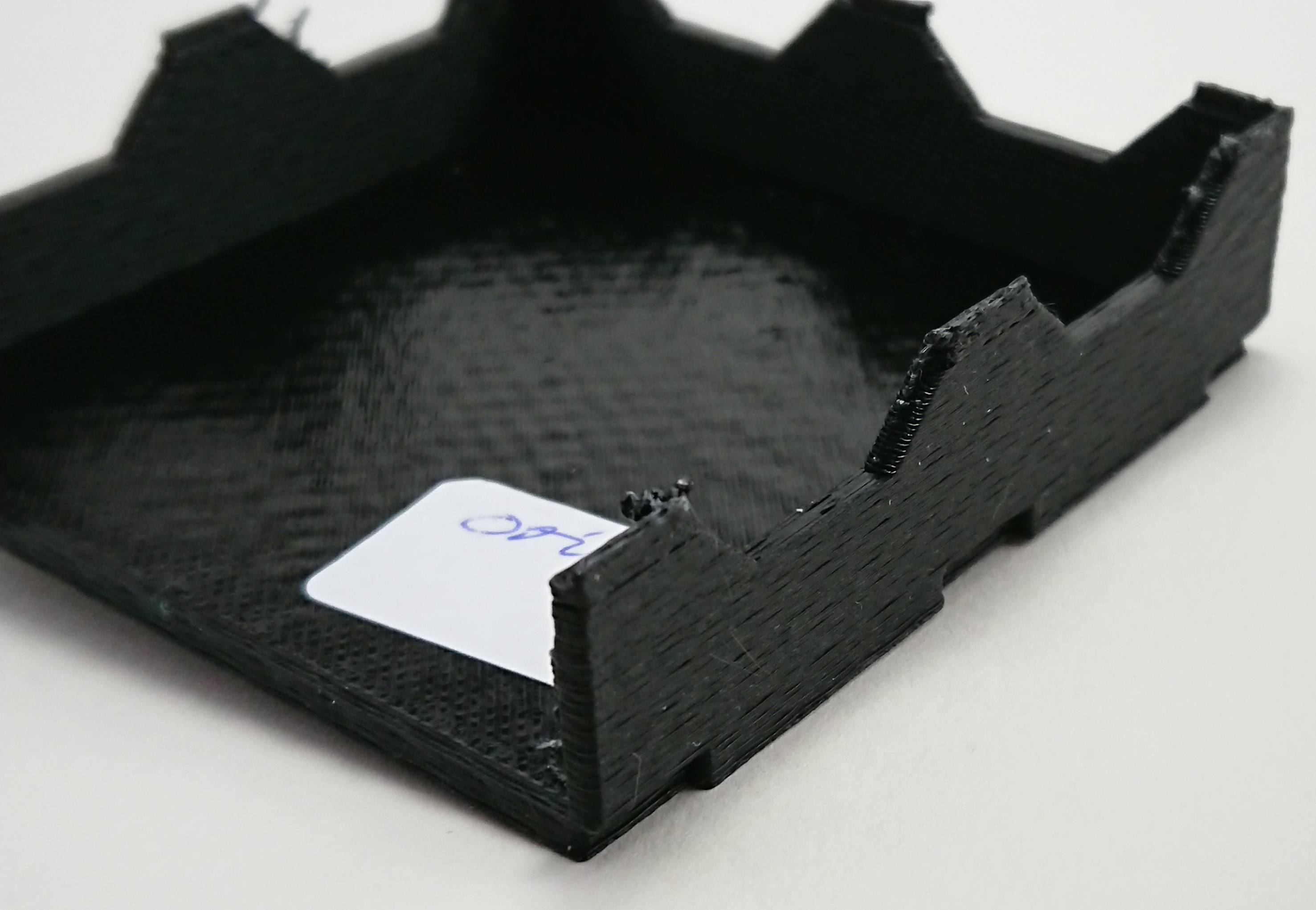 Printing time for the above part: about 90 minutes.

Then I increased both printing speed to 50 mm/s and extrusion width to 105%, and expected a quicker print. This is the result: 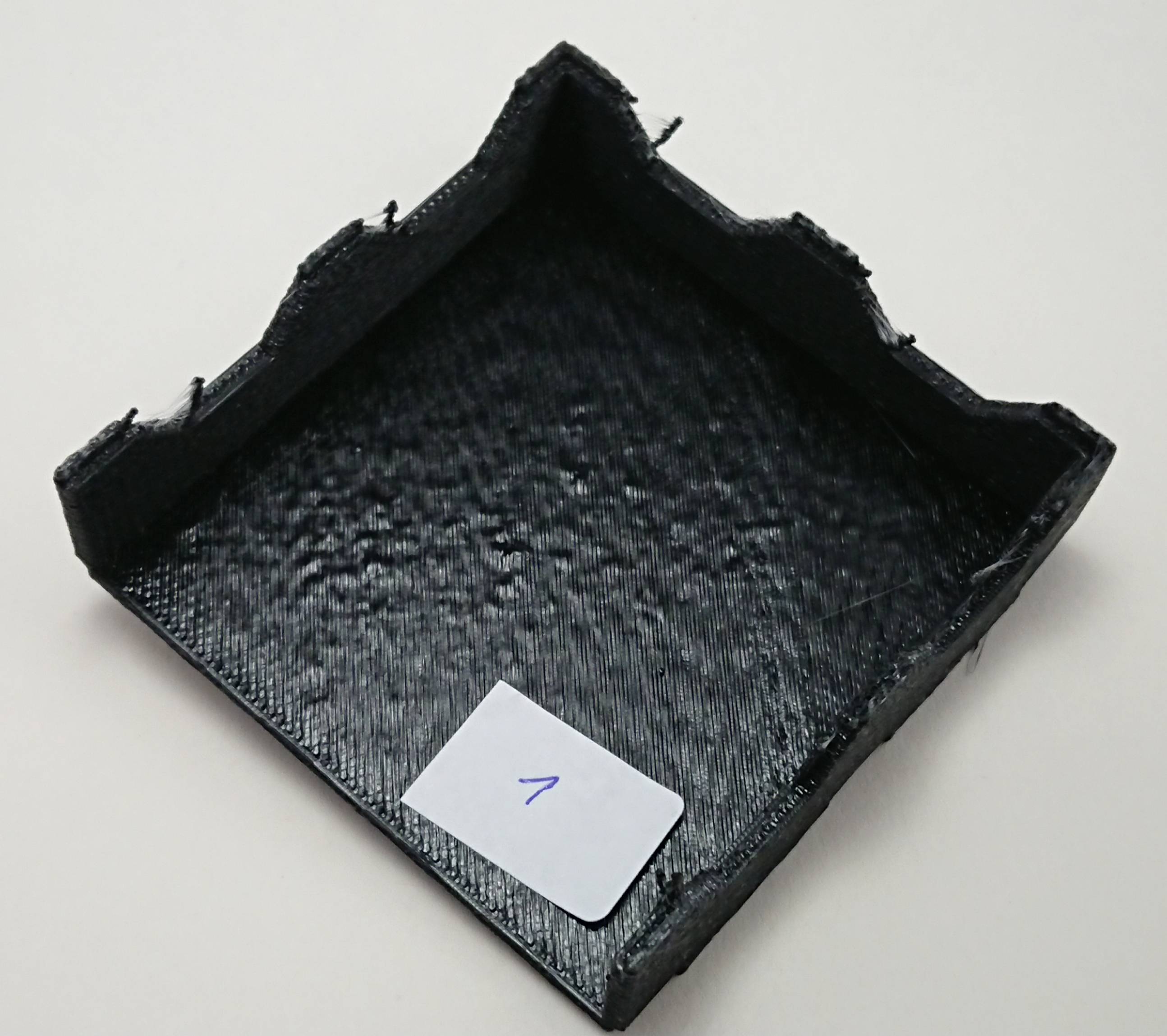 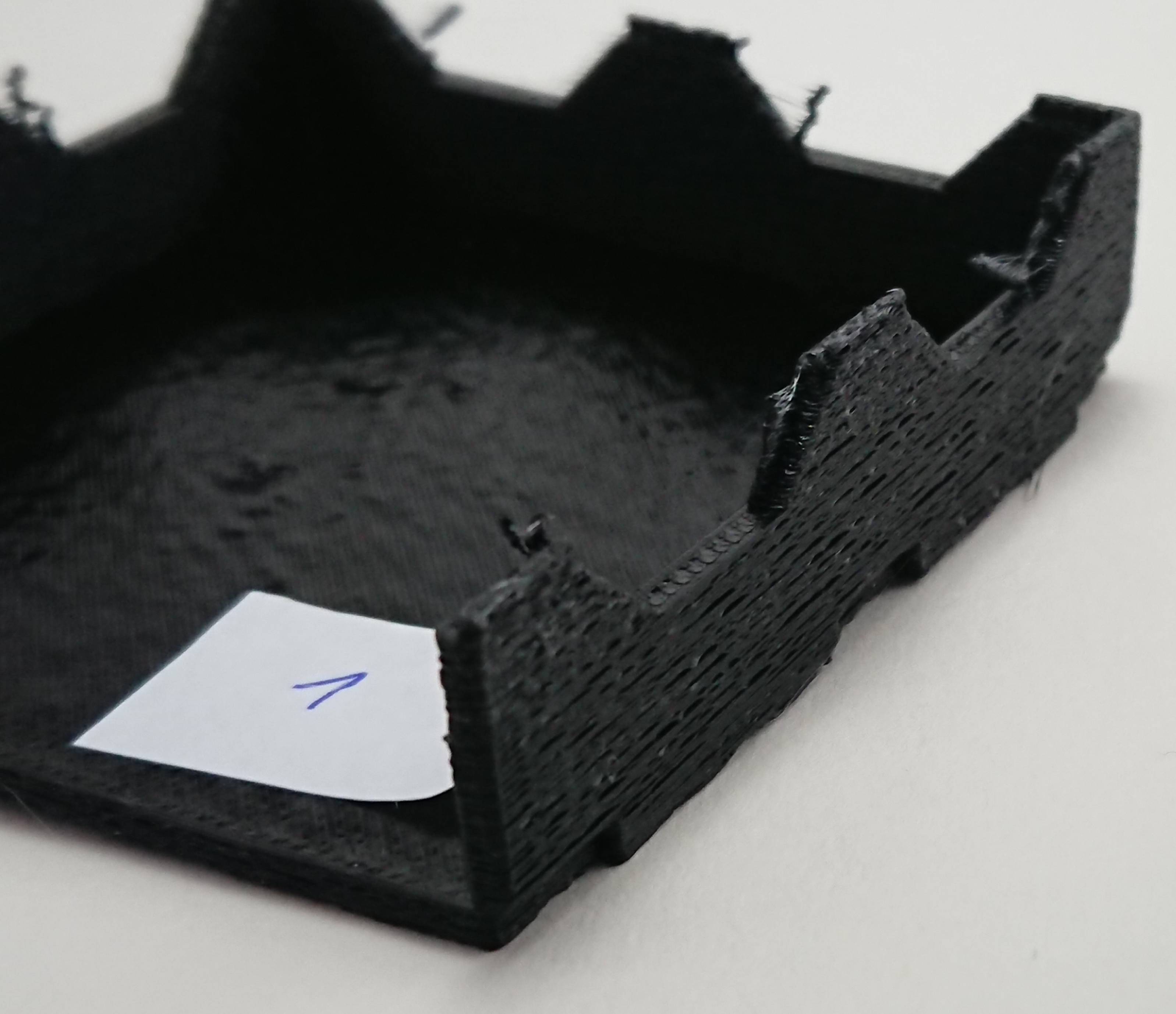 I was surprised to see that this tray, despite the 25% increase in "main printing speed", needed about 120 minutes (that's 30 more than with the settings for the first tray).

Both parts are usable (and they stack), but the bottom wall is a bit bumpy from ripped apart infill. Other observations:

First off: thank you for a very well asked question, with lots of data and info to work with. :)

From the picture is difficult to verify this. If it is an extrusion problem, the thickness of the filament deposed will vary. I would suggest to print the same cube without infill and with single (0.4 mm) shell thickness. to be absolutely sure. If your hypothesis is correct, the wall will thin and fatten, if you are not, it will be just wavy, but its thickness will be constant.

In general, this kind of regular, cyclical defects, are linked to rotating parts being misaligned. Off the top of my head, I would suggest to verify in this order:

EDIT 2: I just thought to clarify that the above assumes the problem is mechanical. Another reason for the defects could of course be electronic, for example electromagnetic interference from some other appliance or a defective electronic component may have your stepper driver have a fluctuating output, thus driving the stepper motor even so slightly back and forth... but I'm not that knowledgeable in electronics, so I wouldn't know how to diagnose that without specialised instruments...

Not the answer you're looking for? Browse other questions tagged prusa-i3 print-quality pla slic3r .

7
Why does my domed print have a thin shell?
6
White PLA prints frequently have rough sidewalls near top of the print
6
Slic3r settings for flat slopes on top
4
Nozzle reducing flow as it comes close to finish layer
2
Speed issue with Slic3r and Marlin
5
Prusa i3 Mk3 - Top layer wrinkles (not on buildplate)
6
Infill not reaching perimeter
3
How do I get circles on small interior holes to adhere to the bed?
6
How is E value calculated in Slic3r?
2
Shell detaches from the rest of the part