How to modify 3D model of body?

I'm relatively new in the field of 3D printing and design. By now I've created and printed some technical objects with TinkerCAD, but now I've a task, which I don't know how to solve.

I have the following model as STL-file: 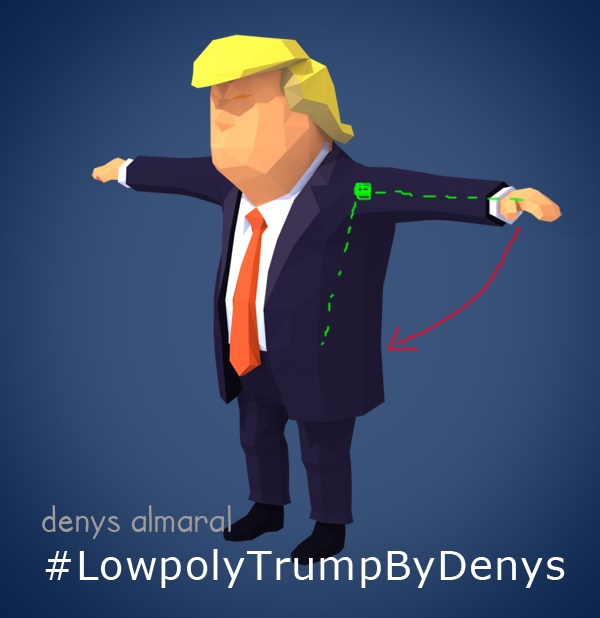 Now I want to "adjust" the arms of the model, as shown in the picture. I want the arms to hang besides the body.

I know that I could cut and rotate the arms and then merge them again with TinkerCAD but the outcome dosn't look good and the workflow feels wrong.

So what is the right tool/way to get this task done?

*Disclaimer: I'm not Denis Almaral, but he released this model unter CC license. So I kept his name on the image to credit him, as requested via CC.

Basically there's no good easy way to do this.

At this point you only have the mesh - a list of triangles - the 3D model you have does not contain the concept of joints or moving parts so it can't regenerate the shoulder after the rotation.

The original author may or may not have the ability to do this, depending on his workflow and software.

The correct/good method to achieve this is called "rigging", but it is not an easy feat (as pointed out by others), as it requires plenty of knowledge about the software being used to edit the model, and a good understanding of the theory behind it.

Skeletal animation requires the designer to set up a skeleton (also called "rig", hence the slang term "rigging") for the mesh and define the variables controlling the motion range of the joints and and the geometry and deformation of the mesh.

It's quite some job to perform, so - unless this assignment is the first in a series of assignments having to do mesh movement for this model, or you have a keen interest in the topic - I would suggest you to take a shortcut and edit the mesh directly in a "one off" not reusable fashion.

(Rigging would conversely allow you to create a "rag doll" or at least a "rag arm" to freely and intuitively move around as you please).

The tool I would use for either task is blender. If you want to take the shortcut, maybe a less complex software like meshmixer could also do the job (I don't have direct experience with it, though, so I'm not 100% sure).

The blender foundation have a nice series of videos on the topic, called "humane rigging".

Not the answer you're looking for? Browse other questions tagged 3d-models 3d-design cad stl .

4
Car Body shop Printers
8
What is the easiest way to modify/resize an object inside a STL file?
7
Can a 3D model of a copyrighted work be rendered legally without infringement?
5
How do I compute the surface & volume of a large amount of STL files?
2
How do I keep the .stl files from being resized while exporting?
1
How to build a CT scan into a printable 3D model?
1
how to split a 40" model into 5 parts to print seperate
3
How can I convert STL files into PDF drawings?
1
How to edit STL model files
0
Fill hollow part of body in the 3D model