Is possible print this level of detail?

I'm new at 3D Printing. I made a model of what I want to print using blender, but it's really small with a little system that must be very precise to work.

What I have is like a hollow cylinder with a diameter of 11mm, and a thickness of 1mm. This goes inside a counter part, that is carve with the cylinder shape, but with a little extra gap so it can rotate like an axis. Maybe this picture explains better: 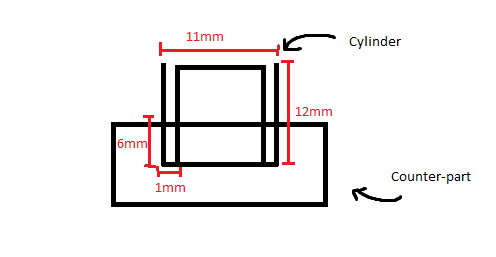 And this should be the front view of the counter part: 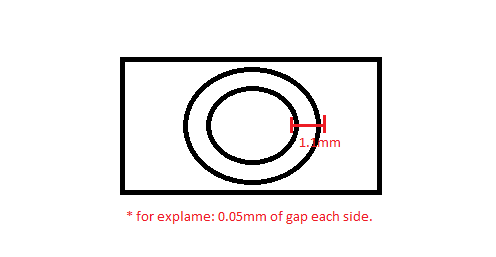 So, I need to know if it's possible to print that cylinder hard enough to work as an axis. And what should be the gap size between the cylinder and the counter part's hole to rotate properly? If it's is like 0.05mm, can I print that level of detail with a 3D printer too?

Thanks in advance. Sorry for bad english, I hope you understand! 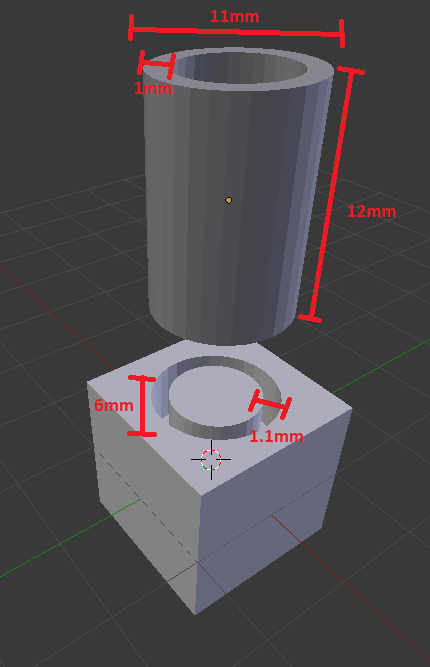 (6mm is the depth of the hole)

It is definitively possible to do what you want, but your questions are samewhat problematic:

So, I need to know if it's possible to print that cylinder hard enough to work as an axis.

"hard enough" is a mysterious quantity. What is the intended application? The load of the axis, the rotation speed, the medium in which the part will be in, its operating temperature... they all affect the answer.

And what should be the gap size between the cylinder and the counter part's hole to rotate properly?

Reading at the question and the comments, I think you may have the wrong representation model in your mind. There are four different concepts at work here:

So: what you want to achieve for the object to rotate is to have at least some clearance once you have the parts printed. Therefore, you want to design your part with an allowance which is at least as much as the accuracy.

Note that a machine cannot produce parts with a tighter tolerance than its accuracy. So you must design your part with a tolerance equal or greater than your printer accuracy.

The correct number will therefore be entirely dependant from the specific printer you will be using. You can find out the specific accuracy of a printer by printing a tolerance test (I know, I know... why isn't it called "accuracy test"?)

See this unrelated answer - from wich I took the above definitions - for learning more about the above and a concrete example.

I hope it is now clear why this question makes no sense: clearance is a variable which depends from accuracy (and the application), not the other way around.

This comment too is incorrect: the "gap" (clearance) can be very very small. You have to have the correct allowance in your design, and allowance will not intrinsically make a part larger.

Again: this is entirely dependent from your application (load, operating temperature, orientation, speed...)

I don't worry about breaking, but it cannot be flexible

Again: without an explanaton of the intended use (or the numbers associated to it) it's impossible to answer this comment conclusively. Resins tend to harden to more rigid solids, but you have thrown around tolerances as small as 0.05mm in your writing, and over 12mm of axis, that is a deviation of less than 0.5% from "perfectly straight". I'm hard pressed to think you will find a printable material with such a rigidity.

It is considered good practice to limit your post to one question at a time. The question about hardware and material is too broad to be a good question and I will set that aside.

Equally unfortunate, your drawing is ambiguous. I suppose if English is not your native language, I'm not helping things either.

The drawing has some errors that make it challenging to be certain of a correct answer, but I can provide you with some useful information as a direct result of a test print created today.

The test print for my printer creates a series of spool shapes within retainer shapes. More complex than a simply cylinder making the test that much more difficult.

My printer is able to print without problem parts that are 1.0 mm apart, 0.8 mm apart and 0.6 mm apart. The test failed at the 0.4 mm spacing and the 0.3 mm spacing, telling me that I need to perform some tuning.

Your question asks about 0.05 mm spacing. I think you will not find an FDM printer that will manage such separation without bonding together the individual components. FDM printers use filament.

You may also not find that an SLA or DLP printer can provide such tight tolerances. It is the most likely source of a success, however. I have only minimal exposure to tolerance in this type of printer. SLA/DLP printers use lasers/light and liquid resin. They can accomplish 0.05 mm layer thickness, even as small as 0.025 mm layers, but I do not know the figures for horizontal precision/accuracy/tolerance.

SLS printers use a nylon powder and a laser to fuse the powder together to form the model. My SLS printer uses 0.050 mm powder. To accomplish the separation you require would mean a single layer of powder will separate the individual segments of the model. This is not practical for this type of printer.

Your best bet would be to consult with a 3D printing service that uses SLA printers. SLA is likely to be more precise than DLP due to the method of exposing the resin, although that is not a universal truth.

Not the answer you're looking for? Browse other questions tagged print-quality print-material or ask your own question.

8
Are there any "best" or at least "common" practices to handle allowances in OpenSCAD code?

7
Why does my domed print have a thin shell?
5
Why is the bottom of my part not smooth
6
Infill not reaching perimeter
8
Ultra high precision and accuracy printing
1
Does this microstepping test result indicate need for TL smoothers?
2
Help diagnose Z-banding
4
Print of fine hole seems to twist
3
Visible lines along Y-axis on Ender 3 Pro
1
Stringing between holes