3D Printing of a Swellable Material

I recently saw this video of super-swellable polymer and felt inspired. Printing a swellable structure would be sort of interesting. However, sodium polyacrylate isn't a printable material. Does anyone know of a material that is? Preferably, swelling activated by water.

The video treats about sodium polucarbonate ‎(C3H3NaO2) this is a superabsorbent polymer has the ability to absorb as much as 100 to 1000 times its mass in water. This is used as desiccant on products that moisture can be a problem basically during storage prior selling. The video shows the water how is trapped inside the particles of sodium polycarbonate, this happens inside a diaper or any product urine odor absorbing, also is used on waste liquid control.

Also you can find something similar on some products that has a little bag that says silica gel (SiO2).

There appear to be at least two papers which revolve around the use of hydroxypropyl cellulose (HPC) filaments.

This proposal/article, from Journal of Drug Delivery Science and Technology 30 July 2015 seems to, at least, partially fit your criteria, 3D Printing by Fused Deposition Modeling (FDM) of a Swellable/Erodible Capsular Device for Oral Pulsatile Release of Drugs by Melocchi et al.:

The aim of the present work was to explore the feasibility of fused deposition modeling (FDM) 3D printing in the manufacturing of capsular devices for oral pulsatile release based on a swellable/erodible polymer (hydroxypropyl cellulose, HPC). This involved an experimental evaluation of the possibility of fabricating hollow structures via FDM and the production of HPC filaments by hot melt extrusion (HME), which are not commercially available. Moreover, the set-up of appropriate computer aided design files had to be faced. A twin-screw extruder equipped with a rod-shaped die and a purposely designed pulling/calibrating device as well as a MakerBot Replicator 2 3D printer were employed for HME and FDM processing, respectively. Bodies and caps with satisfactory physico-technological properties were obtained. The release test of assembled capsular devices pointed out a lag phase before rapid and quantitative liberation of the drug. The morphological changes undergone by the device when in contact with water and their release performance turned out comparable with those of analogous systems fabricated by injection molding. The possibility of manufacturing capsular devices for oral pulsatile release by FDM 3D printing starting from HPC filaments purposely prepared was thus demonstrated, and the real-time prototyping potential of FDM was assessed.

There is also this, which refers to the Melocchi paper above, Fused Deposition Modeling (FDM) 3D Printed Tablets for Intragastric Floating Delivery of Domperidone:

Several novel gastroretentive delivery systems have been explored to overcome the shortcomings above, including polymer bioadhesive systems, swelling and expanding systems, high-density systems and floating systems3

An image of the filament is shown in figure 1: 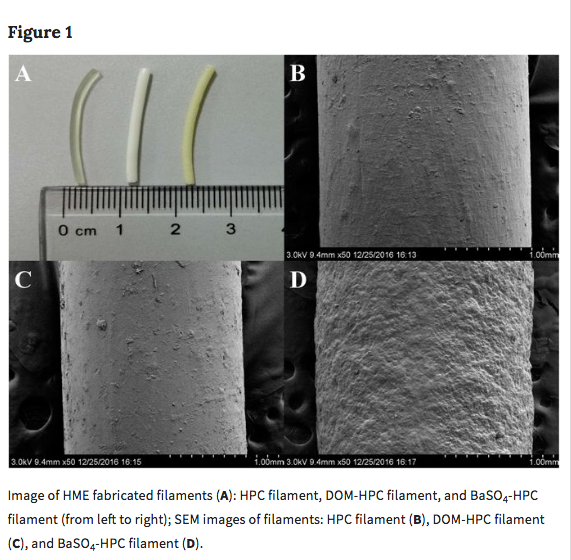 However, as a commercially available filament, you might be out of luck, or at least hard pushed to find one.

Not the answer you're looking for? Browse other questions tagged print-material support-structures support-material or ask your own question.