Fix ghosting problem (damping versus bolting printer to a desk)

I have a Monoprice Maker Select v2. It is the kind where the moving plate (heat bed) provides the Y-axis and the moving extruder provides the X-axis. It has a fairly rigid sheet metal frame. In addition, I added steel rods has Z-braces.

I see some pretty obvious ghosting. This happens for an inch or so right after every sharp turn. Clearly, vibration is to be blamed. I found two simple techniques that improves the situation:

Surprisingly, these two opposites provided exact same level of improvement for ghosting. My question is: which approach is better? Moreover, to further improvement, should I use...

Ghosting is caused by differential movement between the bed and the head when the head undergoes acceleration. The forces add energy to a resonance in that differential vibration mode.

By changing how you mount the base, you will change the mode and probably change the frequency.

With the soft mounting, the bed can move more easily. It will tend to follow the head acceleration better. The whole system will still ring (you can't get rid of the momentum change), but you can cause the energy to go somewhere else and not excite that mode.

With the base bolted down tight, the base gets stiffer, increasing resonant frequencies. You also may be making the base more resistant against racking or twisting motions.

It is completely credible that both interventions reduce the problem. Of the two, I would prefer any intervention that increases the stiffness.

If you know your movement speed (perhaps from your configuration file) and can measure the linear frequency of the ringing, you can determine the resonant frequency that is being excited. Depending on the frequency, you may be able to excite that frequency with an audio generator and transducer (maybe even just a speaker), such as with one of these: Dayton Audio Transducers.

With the system shaking at the right frequency, you can use your finger to find portions of the frame which are vibrating strongly, or maybe even your phone camera to make a high-speed video of the movement.

There are 3 options to reduce ghosting working on different methods.

When the machine changes movement direction, it does so with a very short time difference delay between the head and the frame, inducing vibration. Let's assume the head makes just movements back and force around a point $x_0$ in the mid of the bed with an amplitude of 1. So the positional curve of the print head is $x_h=x_0+sin(\omega t)$. The second derivate of this is the acceleration $\frac {d^2} {dt^2}{x_h}=-\omega^2 sin(\omega t)$. The frame though lacks behind, it has a phase shift to this. It's movement is $x_f=x_0+sin(\omega t +\tau)$, so its acceleration is $\frac {d^2} {dt^2}{x_f}=-\omega^2 sin(\omega t +\tau)$. The factor $\tau$ is determined how the printhead is mounted (friction), the weight of the frame (it's inertia) and how stiff it is. It might change depending on the height due to the construction of the frame (changing stiffness).

We'll assume a 1-dimensional printer as it is easier to model, but in praxis, we'd have all three axis to look at to model the printer in its entirety.

One way to lessen the factor $\tau$ is to reduce the ability to transfer the motion energy between the print head and the frame. This means to reduce friction between the frame and the printhead. So better bearings are one way to do this.

Another factor is the inertia differential. If the head has less kinetic energy and/or the frame higher inertia, this reduces the ghosting as with less energy available, the phase shift $\tau$ gets reduced. This is where bolting down the printer acts to some degree: the mass of the printer becomes the mas of the printer plus the part it is bolted to.

Here is where a super lightweight head on lightweight carbon fiber tube rails with Bowden setup (Hypercube design) shines: by having a super low mass, the energy transfer is hindered.

The frame has a certain frequency it wants to swing at. To shift this, one can add stiffening rods or different mounting, which also increases the weight. This shifts $\tau$ down some.

Just adding mass to the printer and from the printhead or stiffening the machine has its limits. There is however a way to isolate the machine from other systems: put it on spring dampeners. As long as these dampeners are not in resonance to the frame's resonance, the machine itself can be tuned in itself. At this point comes in what you noticed when you put the machine on rubber mats: if the machine has a $sin(\tau)\to 0$, then the factor $\tau$ suddenly gets only little effect on the calculation. By the way, the symmetry makes it easy for us, creating boundries: $\tau \in \{0,2\pi\}$

It is often hard to find the best way through calculations alone. Even Engineers use trial and error to look for where to add mass (using for exampele clay and weights) and look at complex measurements how much mass they need to reduce where to change the ring of the machine so the multiple factors in $\tau$ cancel each other out or get the resonance frequency where they want it to be.

For home use, it is often the best to fix it as easy as possible.

Ghosting is very well described in the topic What causes “ghosting”?.

To add to that answer and get on topic of your question and your possible solutions I'd like to say that neither of the solutions you provide is correct. What do we know? We know that ghosting depends on the mass of the printer head being accelerated and decelerated. This causes overshoots that are damped out by the construction causing the ripples or ringing effects that die out after a few mm of printing.

If the head is considered to have a mass M1 and the printer mass M2 (where M2 is larger than M1), the following simplified figure can be drawn: 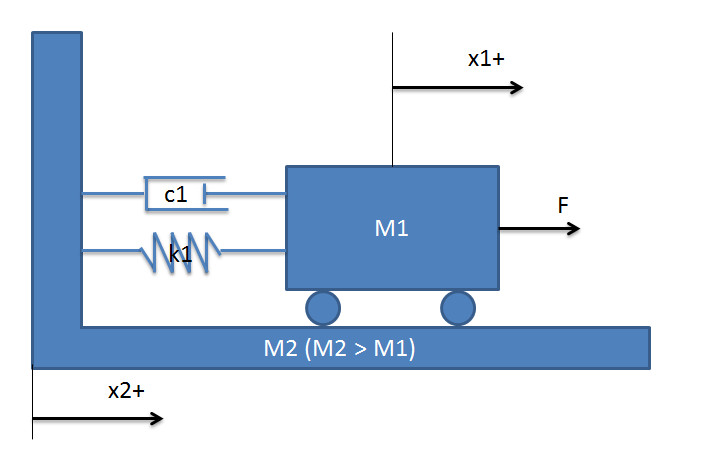 Note that the head is without friction (which is not the actual case), when the head is subjected to a force, or suddenly a force acting on mass M1 disappears, the mass M1 wants to travel further; the spring and the damper then come into play causing a dynamic displacement of x1.

If you assume the printer to be bolted to the ground, M2 becomes the mass of the earth (M2 >>> M1) and solely the x1 displacement is taken into account. However, if you hang it freely (M2 > M1) or use rubber damping between the printer and you get a complex vibrating system where mass M1 influences the displacement of mass M2. E.g. M2 is now connected to the earth (or not if freely suspended) with its own damper and spring (or free). If x2 and x1 are in phase the effect may be even stronger than if x2 and x1 are out of phase. This all depends on the values of the spring and damper values and the involved mass weights. Although clamping down seems the best way to go forward, putting the printer on rubber matting or feet may be more comfortable as it reduces the vibrations.

This demonstrates that the displacement of M1 will always exist until you either fix the mass of the head (M1) or the force acting on mass M1 (lowering speed and jerk).

To fix ghosting it doesn't realy matter if the printer is bolted down or flying thru the air. The main point is to get rid of any movement in the printer construction itself. What I mean: If you bolt down your printer, but all parts wiggle as hell, then you will have ghosting. And if you have a printer with no wiggeling parts, then the printer could theoretical even been moved while printing. So reduce vibration sources or undock them with dumpers and made the frame stiff as possible.

sure a bold down would provide a reduce in flexibility in the printer, but if that would help also an internal reinforcement will do the job. (Like a extra frame)

For my personal 2 cents: I suggest to use a soft floormat to stop vibrations transfering to the table, because it would be annoying a.f. to stay in the same room if you have a vibrating device that uses the table top as a drum.

I got good results by mounting my printer on a concrete paving slab (obviously cleaned and sealed) and placing that on a foam mat. The combination of high mass and flexible mount has substantially reduced ghosting in my prints. Not my idea; I found it on a video on YouTube (linked below). Honestly not sure if this is the best solution from an engineering perspective (I like the idea suggested above of trying to find the resonant frequency) but it's easy, fast and cheap. And as a bonus, it has substantially reduced the noise level of my setup.

Personally, I would select the 2nd option.

The forces and vibrations inside printer will propagate over every single part connected. Having that in mind, making rigid external frame is just a part of the solution.

Fixing it to the floor will be a benefit and considering points above will also improve printing quality. 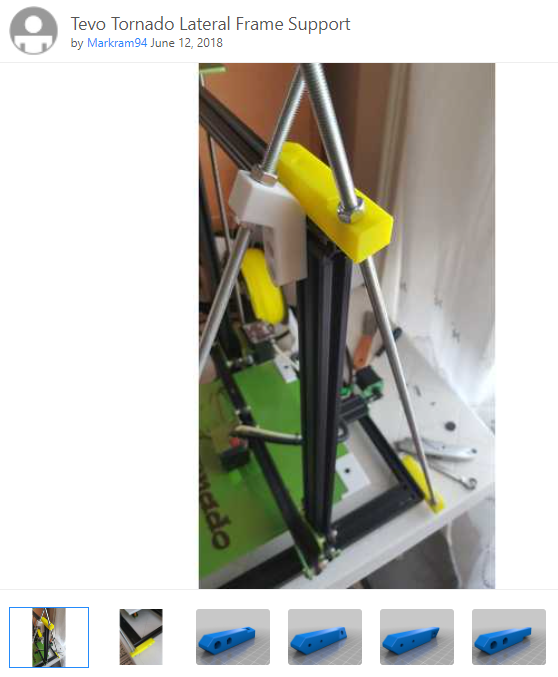 I'm missing something here. How about damping the movement of table and head by placing a tuned mass damper on table and head? Something like a mass that is mounted in the top of a skyscraper...

5
What causes "ghosting"?
4
Does a sturdy table really matter?