Has anyone run into problems printing with Proto-pasta's HTPLA on a Prusa MK3 (or any printer really)?

I picked up some samples from PP, specifically their glitter filament and a couple of the premium HTPLA filaments. I printed one small piece with the glitter filament the first night I got the package, but I haven't been able to get any of the filaments to print since.

Here's a video I shot outlining the issue's I'm running into.

The problem seems to be that the filaments won't extrude from the nozzle and this problem applies to all of the samples I got. If I unload the HTPLA and print with any of the other filaments I have been printing with (various inland filaments) they all print out fine.

I thought maybe I had a clogged nozzle so I did a couple of cold pulls with a different filament. The pulls came out clean each time. I tried loading the HTPLA back in and while the filament extrudes fine during the MK3's loading process it still doesn't extrude when trying to run an actual print.

I've read through Proto-pastas page on avoiding clogs with composite PLAs and adjusted my slicer settings accordingly but still can't seem to get a print out.

Over the weekend I talked a bit with proto-pasta and did some tests on my own. Proto-pasta suggested disabling the filament sensor on my printer since the additives in some exotic filaments can falsely trigger the sensor.

I went to try this, but my sensor was already off.

I tried switching back to a known good filament and found that I couldn't get anything to extrude anymore. After researching a bit online I suspected that there may be an issue with a clogged nozzle, so I did a couple of cold pulls and then tried one of my known good filaments again. This time I was able to extrude and print out a full test without issue.

After that I switched to one of the HTPLAs and it started printing. I thought all was good, but during the course of the test print the nozzle clogged again and stoped extruding.

So I'm close, but not quite there. I'm wondering if cold pulling again to unclog the nozzle and then walking through some of the settings changes outlined in proto-pasta's page on avoiding clogs will help. If I spent the entire time walking through that page with an already clogged nozzle it would make sense that nothing worked. That page is more a list of preventative measures rather than reactive.

I'm going to dig in more tonight. I'll post back with an update.

I got a reply from Proto-pasta for some questions I asked regarding the nozzle dimensions I should use with their filament. The 0.4 nozzle borehole is not too small for the glitter, though the larger diameter will help it sparkle more.

Thank you for following up. Yes cold pulls that leave behind material can cause all sorts of trouble. It happens to me on the Lulzbot quite often, probably my biggest gripe about that machine. Anyways, on to your questions:

I had a dragging idler pulley that was causing extrusion issues. Opening the idler pulley door and working it a bit with my finger resolve the issue.

So after two weeks or so of troubleshooting, banging my head, taking a break, and coming back to it I'm finally getting good prints again.

I do believe the original problem started with the clogged nozzle due to the bore hole diameter being too small for the glitter filament as mentioned by Axel in the post comments (a bit rude about it, but still probably true), but there were other issues that I ran into.

After I switched back to inland filament (which had been working fine for months) I was still having extrusion issues. At this point it was due to the clog (I suspect). 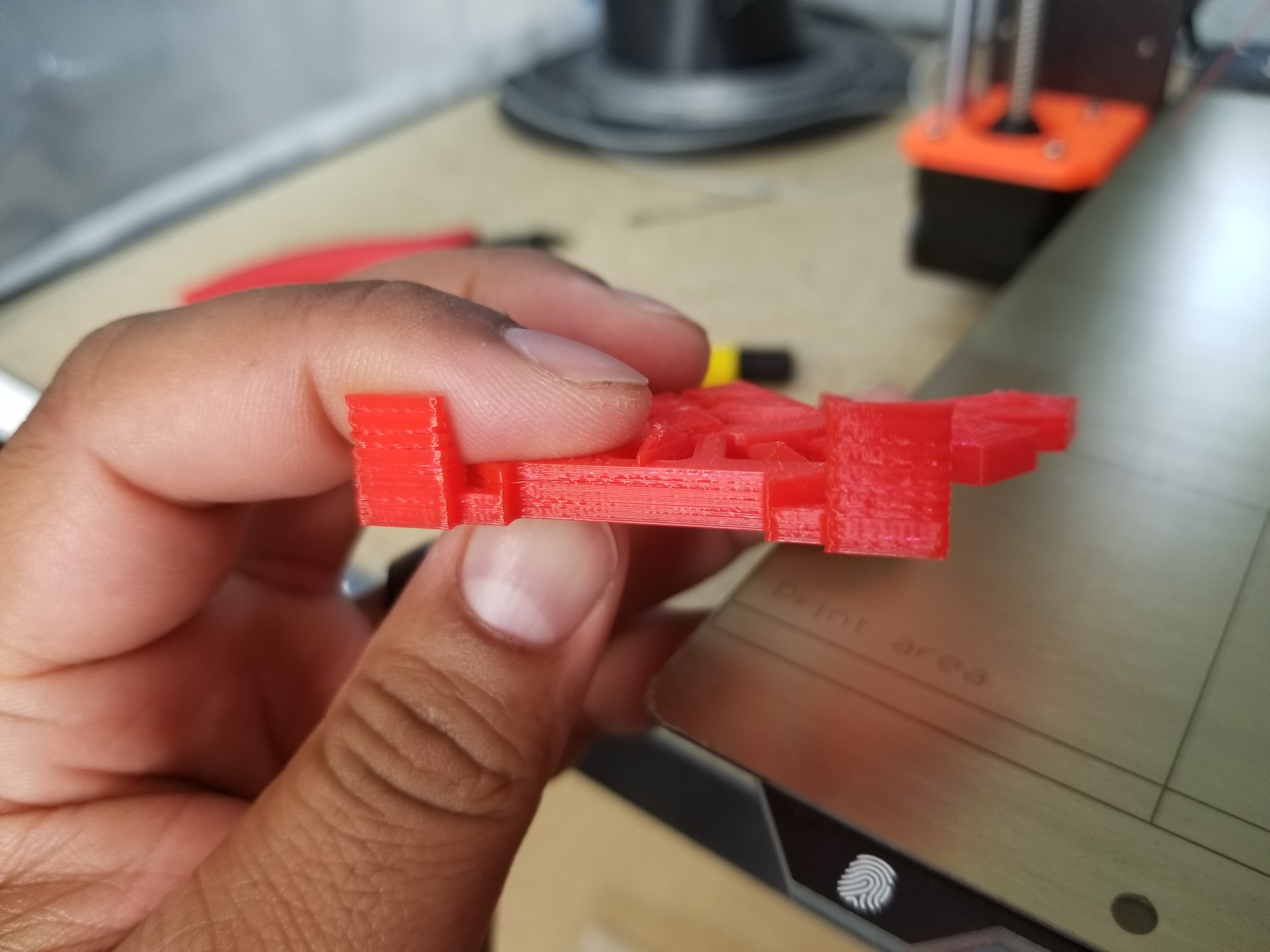 I tried several steps to unclog the nozzle including the steps suggested by prusa support and cleaning techniques suggested by Tom amongst other places.

I also picked up a couple of pencil brushes on amazon including a small brass brush that's perfect for cleaning off the extruder pulley teeth.

During these steps, I think I introduces the second problem without being aware of it. I perform a bunch of cold pulls (explained by Tom in his video and other videos and posts). During one of these cold pulls I forgot to loosen the MK3's idler pulley door before tugging. Once I noticed it I loosened the door, but I think that tug may have affected the idler pully getting it a bit gritty (I don't know how it would have done that, but it's my current guess).

At this point I was still getting extrusion issues and didn't think about the idler pulley being the issue, so thinking that the nozzle was still the issue I ordered a second E3D nozzle and some Ethyl Acetate which dissolves PLA.

Notes on Nozzles and Ethyl Acetate

A couple of helpful points I learned while researching these purchases.

There are a lot of cheap nozzles that say they work on the E3D, but be sure to read the comments from whatever nozzle you're looking at because apparently a lot of them either don't fit or don't print well.

I ended up purchasing a replacement nozzle sold directly from E3D to be safe.

As far as the Ethyl Acetate, I was having a hard time finding it online when looking for it as a solvent without having to purchase the chemical in a giant jar. I didn't want to buy a jug, I only needed a bit.

After doing a bit more research I found out that it's the same chemical that entomologists use to kill insects for preservation and when you look for the chemical from that context you can find it sold in much smaller quantities. I was able to find a small jar of ethyl acetate on amazon for 7 dollars. Smaller, safer, and cheaper.

Once the nozzle and ethyl acetate came in I pulled off the old nozzle, dropped it into the ethyl acetate to soak, put the new nozzle on (per the instructions from prusa's website), and reaccelerated the printer just to be safe. I tried printing a test block and it seemed better, so I then tried a larger print and while the printed model seemed better, it was still obviously having extrusion issues and crumpled in my hand.

With the nozzle ruled out, I started looking elsewhere on the printer. After watching a video from the 3D Printing Nerd on extrusion issues he was having on his MK3 I decided to check the extruder pulleys. When I tried to open my extruder idler pulley door I noticed I couldn't actually get it open; it seemed to be stuck on the bottom. I tried to free the bottom of the door, but couldn't without forcing it past my comfort level. Instead, I unscrewed the top of the pulley door to remove it. 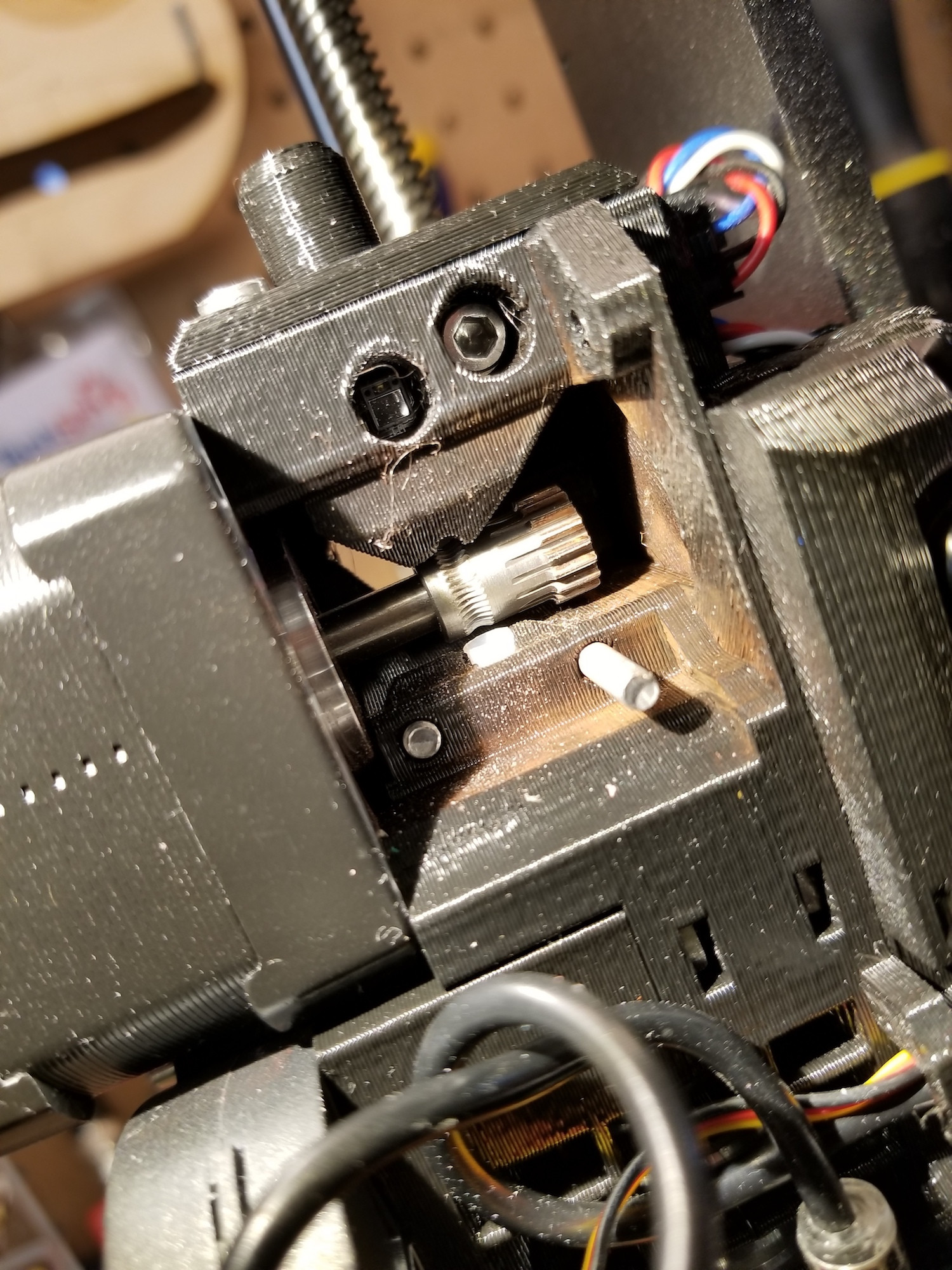 From here I noticed two things, I didn't get the pulley teeth as clean as I though I had before and the idler pulley's mounting rod was extended just a bit (which is what was causing it to stick at the bottom). I adjusted the rod and put the door back on. It was printing better but still had extrusion issues.

I then watched the pulley during the filament loading and notices that while the extruder stepper motor was turning smooth, the idler pulley was stuttering a bit while turning. I imagine those little stops and starts were what was causing the extrusion issue.

I opened the idler door back up and worked the idler pulley a bit with my finger. It started to spin free (maybe there was gunk in it? maybe it was rubbing a bit against the mount? ¯\_(ツ)_/¯), so I closed the door and screwed it back in tight. 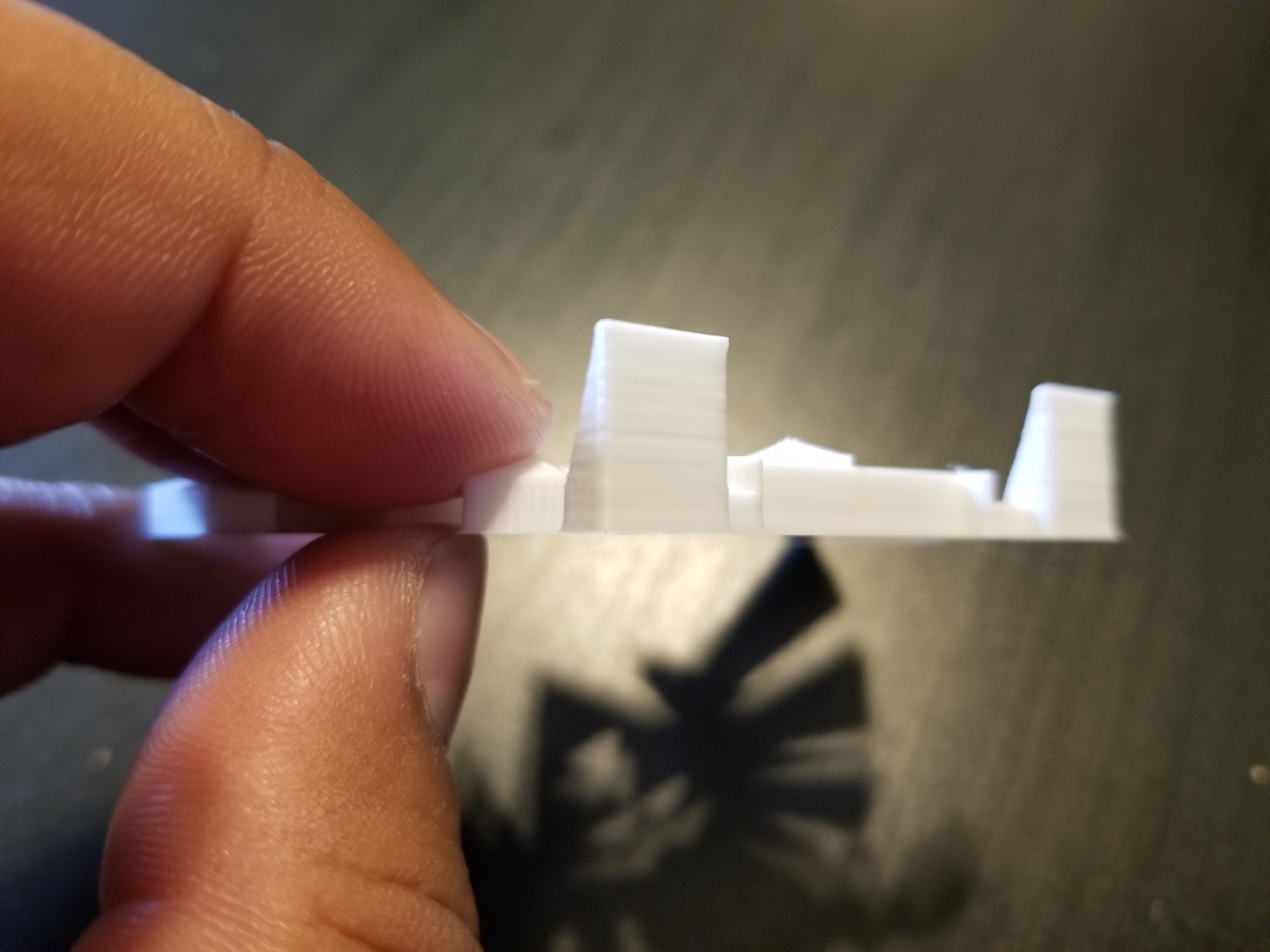 I've run several prints increasing in complexity and it seems like I'm back to printing well. 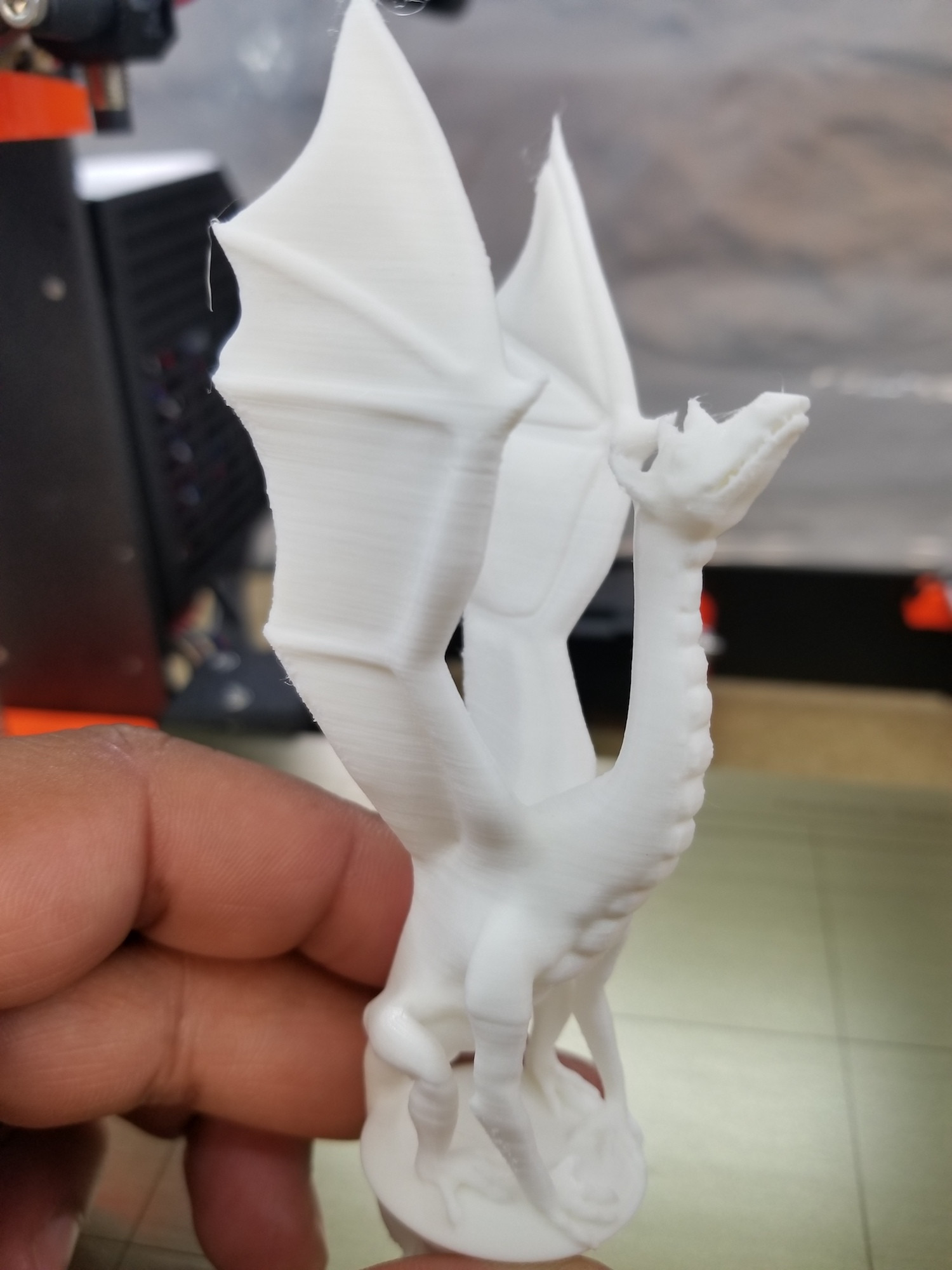 How I introduced my own problem

As I noted above in the explanation, I think I introduced the problem during a cold pull where I forgot to loosen the idler pulley door. I know this explanation is super verbose, but when looking around, even after fixing the printer, I haven't really seen many people noting that on the MK3 you should make sure the door isn't screwed down when performing the cold pull. It's def a common sense move, but I don't see it mentioned as a potential for introducing a problem.

Also I didn't see a dragging idler pulley as a possible cause of extrusion issue so I thought I'd note it here as well.

Hopefully if anyone else has a similar problem on the MK3 this will be a source of help.

Not the answer you're looking for? Browse other questions tagged filament prusa-i3 filled-pla .

7
What nozzle size should I use for filament containing glitter?