I have been given a proprietary 3D file of a real world item from an item manufacturer with the obligations not to hand it out to anyone to produce a print in a low single digit percentge scale of the object. The object model I was handed was given in STL format, and contains even the tiny geometry of the internals. The first set of files given did come with walls that became too thin to be printable in some areas, and I had to ask them to thicken these parts, which they did.

Now, these files still contain tons of redundant internal geometry), like bolts that would be M20 or something IRL. The technical design is actually produced in a 1:1 scale - and thus much of the item's complexity is retained in scaling and slicing, because I was provided with neat, nested shells that don't intersect at all. A tiny piece of internal geometry after slicing for illustration without giving much about the actual object (which is under DND). 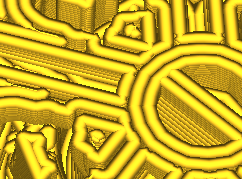 ALL of this internal is superflous, waste of material and additional print time.

The STL of this item contains (according to Meshmixer) about 40 shells, most of them representing single bolts, while the really relevant parts are all in the shell 1. The really problematic part is though, that even ditching these 39 superfous shells, the space reserved for them and a lot of internal geometry is left behind when I try to get rid of the internal geometry.

Saturday I tried for hours to simplify the model first and then stitch away tons of the internal geometry with blender, but while this did reduce print time greatly for the internal cavities were gone, the simplification did mess up other parts of the model to a degree that wasn't nice anymore and it messed up the scaling. Also, it was very time consuming - 6 hours or more - which makes this a very bad time-effect ratio. The print with the retaining 2 % of the vertices was... ok, but not as nice as with the half million vertices from the original file, mainly because I had to simplify the model first to even have a chance to see into the model to get the internal cavity vertices grabbed and removed/merged, before fixing any holes left from the mercyless treatment by Meshmixer's auto-repair feature.

Is there a way to analyse a model for internal structure and remove them for slicing without having to remodel a 500k vertex / 50 MB object in its full? It would be best if such a way was somewhat automated.

My setup usually uses Cura as a slicing engine, my modeling softwares of choice are - in this order - Fusion360 or DesignSpark Mechanical. If nothing else helps and I have to attack singe vertices I do my way around Blenderauto-updated via Steam. Meshmixer I usually use only to fix up models before slicing.

About 10 minutes after writing the question, it suddenly dawned on me, that I was not using Meshmixer to its full potential, and especially not a simple property of Cura:

So the odd solution to how to reduce a model's internal geometry without impacting the outer look can be this at times:

To illustrate, almost the same area of the object before and after the added cylinder: 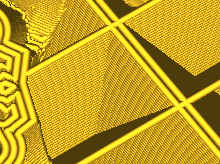 As one can see, the structure became much simpler, as the cylinder cuts away all the internal structure (the 'spokes' and 'axle' one might want to identify from the left picture, but that would be a misidentification) is gone. Much less internal geometry is retained and instead it is now filled with a cylindrical space of nice and fast(er) to print infill, here "Quarter Cubic".

While this is just a partly automated solution - demanding the manual addition of the intentional intersecting shell - I am yet to be taught about a fully automated way.

Not the answer you're looking for? Browse other questions tagged 3d-models slicing or ask your own question.

0
Editing stl files for unwanted multiple parts
28
Different infill in the same part
4
What special considerations must be taken when designing parts for 3D printing?
4
Delete only invisible parts of faces

7
How can I make this rounded enclosure feasible to print?
7
Split/edit part in FreeCAD?
4
Internal wall does not print in horizontal print orientation
3
Understanding water soluble support structures
4
Combining multiple STL files
6
PLA printings always ~0.22% larger
1
Pile up objects and attach them for mass 3D printing
0
How to fix WoW models in photon workshop
3
What's the best way to connect pieces of a large print after printing?