How are delta movements calculated?

On a Cartesian printer movements are really simple. If we assume the printer has 100 steps/mm on each axis, then a move of 10mm on a axis is just 1000 Steps on that axis.

On deltas even for simple moves more than one motor has to move. And just calculating the amount of steps on each axis needed to reach the destination probably gives a curved move.

So what is the algorithm to calculate the steps for a given move for a delta printer?

There are two main special steps to the technique used by most open-source 3d printer controllers:

The inverse kinematics are surprisingly simple. A virtual 90 degree triangle is constructed from two known lengths to solve for the unknown third length: 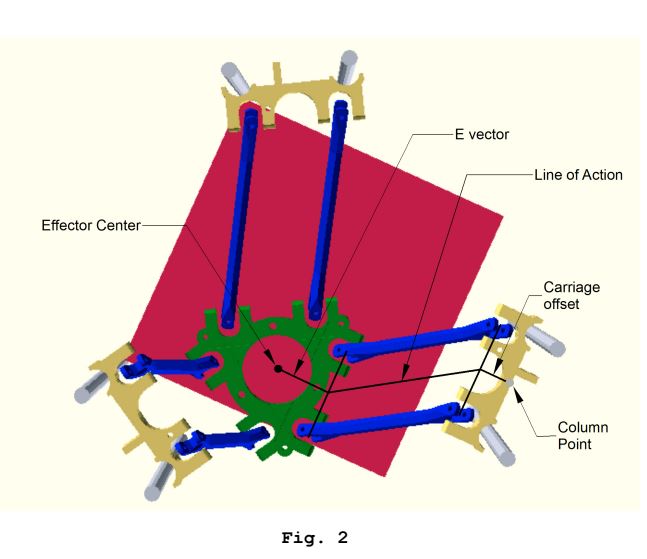 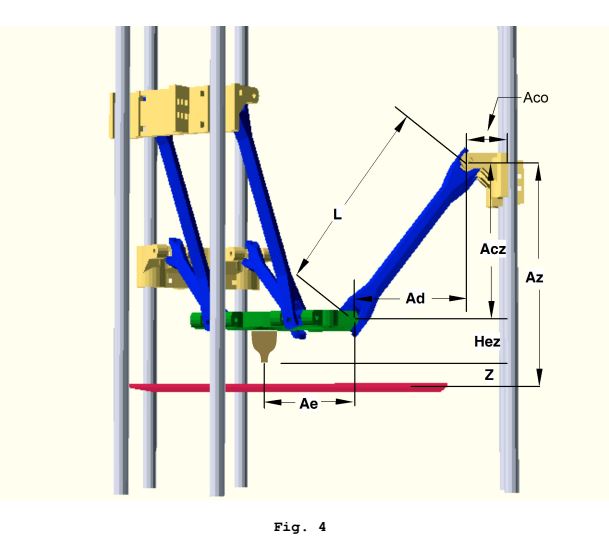 These inverse kinematics calculations are performed for each carriage to get a "carriage space" target position, and this is performed for every path sub-segment.

The results from these steps can then be reinserted back into the standard linear path interpolation techniques for the printer, in which it fires steps in the necessary ratios and at the necessary rates to produce the desired straight-line motion and acceleration/velocity profile. (How THAT is done is a different question.)

*(Constant speed before acceleration slowdowns are applied in order to obey dynamics constraints, anyway. Again, that's the subject of a different question.)

Segmentation is very similar to the process of using a polygon to approximate a circle. If the facets are small enough, the polygon is a good approximation. Higher Segmentation rates produce less path-following error. The primary conceptual difference between drawing circle arcs and Delta motion paths is that the so-called "faceted arc" with Delta Segmentation is constructed in height-vs-time coordinates instead of the X-vs-Y coordinates you'd use to draw a circle on a computer screen.

This system is used in large part because support for Delta style printers was originally bolted onto GRBL-based motion planners which were written exclusively for straight-line motion paths in Cartesian printers. It was a relatively minimal modification to the existing codebase compared to implementing full quadratic path interpolation.

Techniques have evolved over the years. And alternate approaches are often used: for example, the dc42 fork of RepRapFirmware performs exact path-following without segmentation, by recalculating the proper time for the next step after every step. This is functionally equivalent to approximating a circle with a polygon facet count so high that every pixel on the screen gets its own facet. So it is exactly as accurate as the positioning resolution of the motors allows. The downside is that this segmentation-free technique is fairly processor-intensive, so it only works on relatively fast controllers, not the older 8bit Atmega AVR that powers most existing consumer/hobbyist printers today.

Other techniques are possible. The academic parallel robotics control literature is a whole other world of mathematical techniques and complexity in order to produce generalized control algorithms that work for a wide range of robot mechanisms. The version we use in open-source 3d printers is quite simple and application-specific in comparison.

I am describing how this is done in the Marlin firmware.

The first step is to split a linear movement from (x, y, z) to (x', y', z') into many discrete segments. To this end, the amount of time the move would take at a given speed is calculated, and the value delta_segments_per_second is used to calculate the number of segments used.

This is done in the function prepare_move_delta in the file Marlin_main.cpp. The endpoints of each of these segments is then passed to the function calculate_delta:

This function takes care of the delta geometry and calculations needed to convert the (x,y,z) coordinates of the segment endpoints to corresponding positions for the carriages. The translated coordinates are then passed to plan_buffer_line, which calculates the steps needed for each stepper motor and actually makes these steps happen.

The exact kinematics used in this function are explained in much more detail at the Marlin github.

What is important to note is that plan_buffer_line moves the carriages linearly, and the printhead thus describes an arc and not a straight line. A straight line move is thus approximated by many small arcs.

Not the answer you're looking for? Browse other questions tagged delta algorithm .