Different infill in the same part

I´ve have read an article to change different pattern depending on amount of layers, but my question is if is possible to have different infill in the same part? For example:

Probably someone has seen or reviewed another software to achieve this, or I'm fooling myself.

This answer explains that you can have different infill within the same part. Firstly the implementation in Ultimaker Cura is described, secondly how you can do this in Slic3r.

I've used a feature in Ultimaker Cura that can be used to alter the infill density locally. What you need to do is load your model into Cura, then load other objects (models) at the size of the area/volume you want your infill differently and position those at the position you want a different infill. So basically, you use other models to intersect with your primary model to create intersections that can take a different infill percentage. This is extremely useful for lugs and brackets where you need some extra infill (e.g. extra stiffness for compression stresses) at the fastener holes. Note that this is an advanced feature which is not easy to use, but quite handy if you master it.

I could not find the video (on second thoughts, I think it was animated GIF) posted by Team Ultimaker, so I quote a section of one of their forum topics.

A short how-to: (italic font is not in the reference, but added to reflect recent version of Cura) 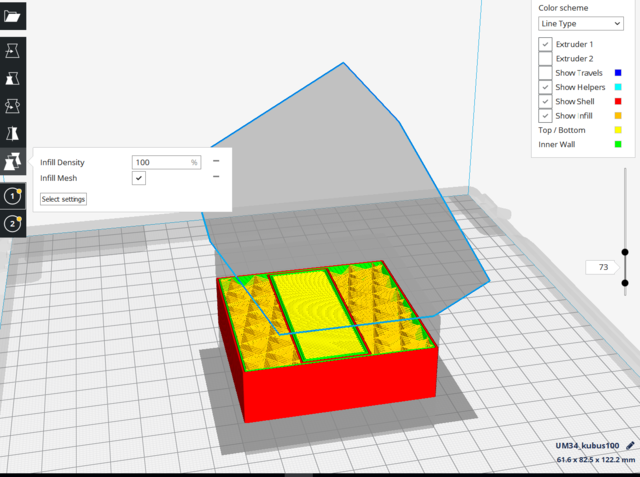 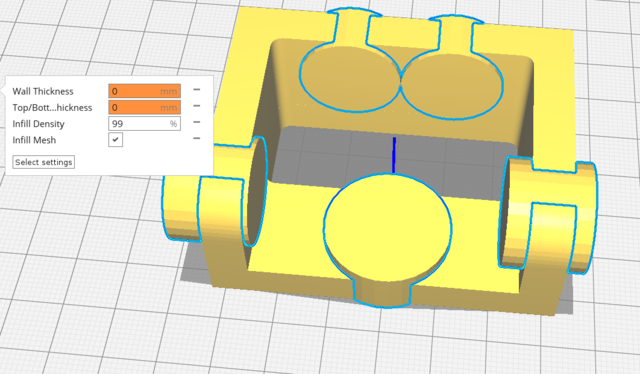 After slicing, you will see that the infill at the intersections is adjusted accordingly. 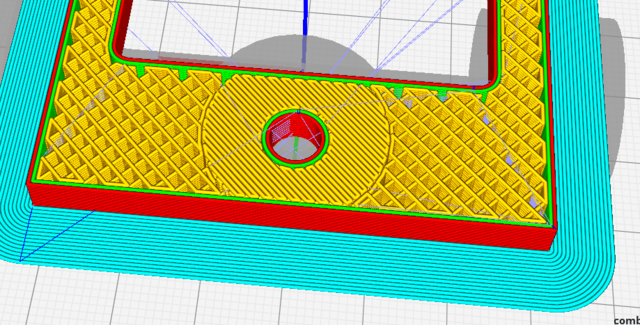 Note: I've tested this in Ultimaker Cura 3.4.1, and confirm it works. I sliced a part with the inserts for fasteners and it actually is not very difficult, it just requires a little more work. You will have to make some STL's of cylinders and position them correctly. If you make your own 3D models it will be a very easy task to add extra components while you design, positioning will be a lot more easy then (as they align with your model). An example is the following linear Z rod bracket of a Hypercube Evolution CoreXY printer, this bracket requires local enforcements for the bolts clamping the bracket onto the aluminum extrusion profile: 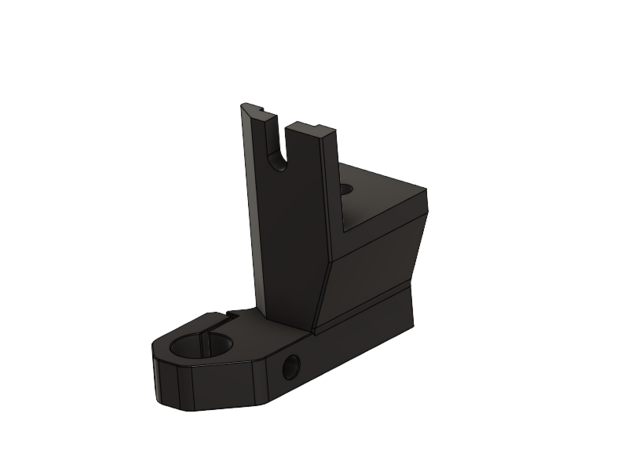 Inserts are modeled together with the development of the bracket: 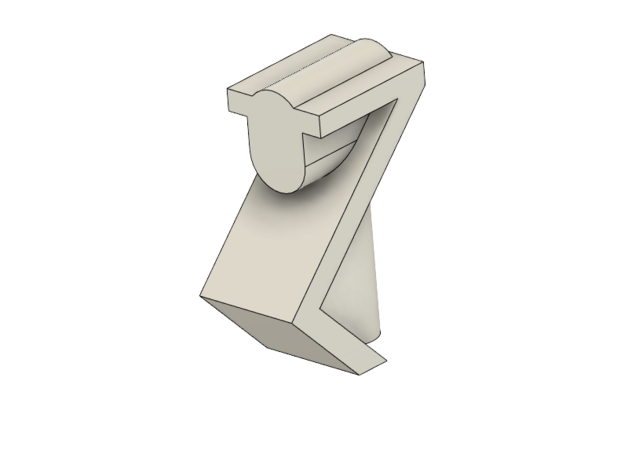 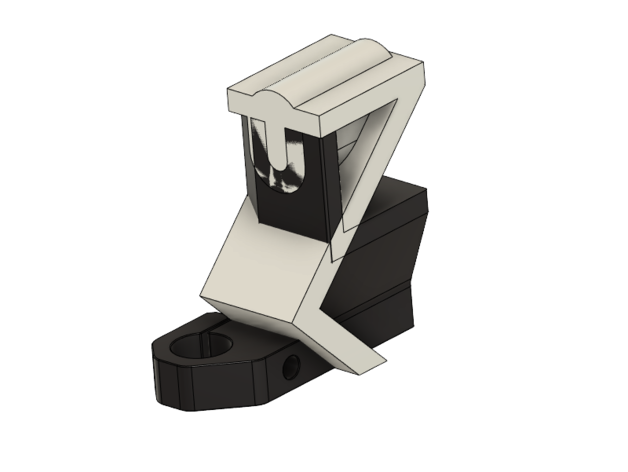 Now the infill can be modified locally to 100 % to increase compression strength.

Note that this will also work if you want a different infill percentage at the first X layers, just use a large cube (larger than the model) and position it correctly. Note that Cura already has an option called "Gradual Infill Steps" to adjust the density at the top layers.

This reference describes how to do this for Slic3r in detail.

The blog describes the use of a simple volume (the green volume loaded from an STL file). After loading:

Right-clicking on the main part brought up the object settings menu. From there, clicking "Load Modifier" and selecting the previously saved model adds it to the part as a modifier.

The green "+" was selected and "Fill Density" was added to modifier list and set to 100 %. 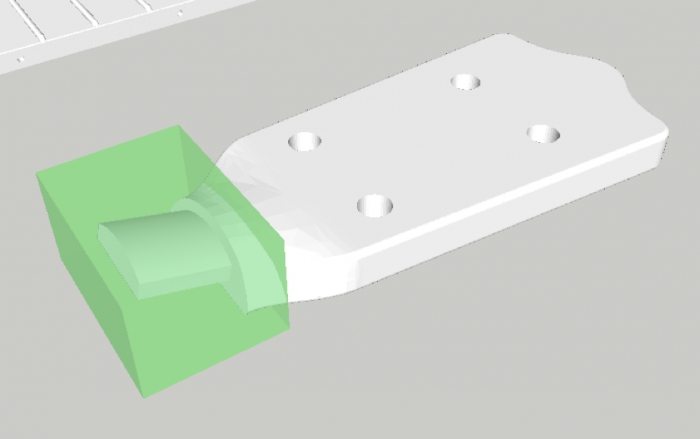 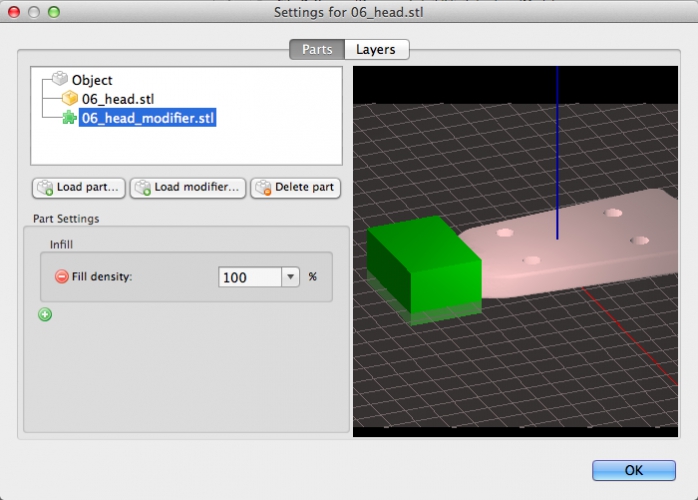 I don't particularly recommend the following, but it may be easier than 0scar's answer (which I would recommend implementing if you use Cura).

Slice your object twice, once at the lower infill and once at the higher infil. Then open both gcode files in a text editor and replace all per-layer code in one file with the code from the same layers in the other file. This certainly takes some care to ensure no bugs fall in, and you'll want to know the exact layers at which to change infill. Further, this only changes density on a per-layer basis, not on an X-Y region basis.

While you definitely can do this with custom slicing settings, if the "infill" is a design constraint necessary for the part to properly function, I prefer making it a part of the design rather than leaving it as something you can mess up at slicing time. This is particularly important if you will be sharing the design for use by others or using a 3D printing service that might not give you sufficient control over the slicing parameters. Moreover, when you say you want "higher infill" in particular parts, this is often an imprecise way of conveying what you really need, which is particular infill structure - usually additional walls - not just a denser version of the infill pattern.

To use your example of points that need to accept screws (either drilled/tapped after printing, or with printed threads), just having denser infill in that part of the print won't help unless it's 100%; drilling into infill pattern will not give you something solid that a screw can thread securely into.

What I do for things like this is create internal gaps in the model, narrower than the minimum clearance needed to avoid walls bonding to each other. For example, cutting out concentric cylindrical surfaces can make a great solid region to thread a screw into. As noted by Trish in a comment, 0.05 mm seems to be a good choice of gap width that's below the clearance needed for FDM printers to avoid bonding, but large enough not to get removed by slicing tools.

If you want to ensure the model is still logically one connected component, leave some gaps in the cut, something like: 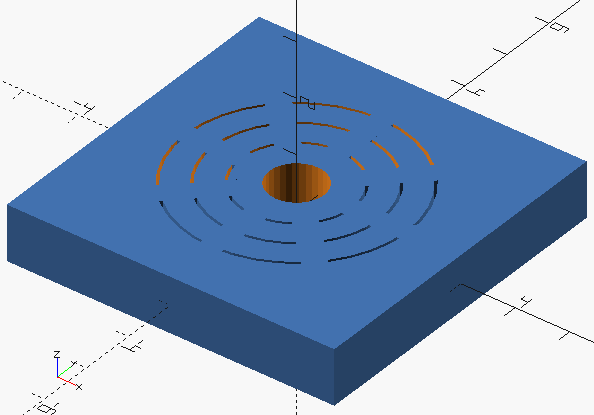 There's a lot of room for experimentation with exactly what kind of gaps work best. As Trish suggested, varying the location of bridges between layers may help. Adjusting spacing based on expected extrusion line widths may also be a good idea. One approach i've used in strengthening bolts, that might also work for threaded holes, is repeating the inner and outer thread profiles as a gap in the model. Here's an example cut to show the gap: 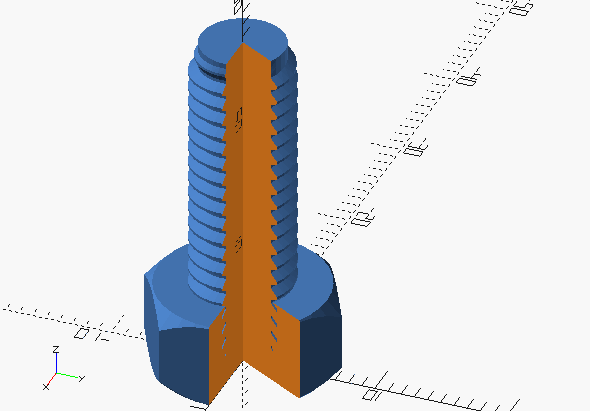 Yes, it's possible, and not just limited to Cura. If you use GrabCAD Print (for Stratasys printers), the Advanced FDM feature allows different infill in different regions of your part - not based on layers, but based on your CAD geometry. Because of this, you have to start the process in CAD, by creating a part with multiple bodies. (For example, in Solidworks, you do this by turning off "merge" when you add a second boss, or by making a cut from a sketch and turning on "keep both parts".)

Once you've done this, go into the Advanced FDM tab in GrabCAD Print, and add your CAD part (the CAD file itself, not an STL). The two or more bodies in your part will be shown separately in the project panel: select them all and choose "merge". Now they will all be printed as a single part, but you can select each one and give them different infill settings.

You can also select any CAD face (i.e. not individual triangles) and override its wall thickness.

You can read a full tutorial about Advanced FDM on the GrabCAD website.

Not the answer you're looking for? Browse other questions tagged slicing infill or ask your own question.

3
Using multiple infill types within one model
3
Selective reinforcement of some places in my part
5
Printing rectangular grid
10
slic3r: Can I vary the infill percentage for different heights of my model?
6
Uniform squishy infill
6
Easy way to refine a 3D-model for 3D printing by removing internal geometry
4
Internal wall does not print in horizontal print orientation
3
What slicer settings would produce the strongest part?
4
Best material for compression?
2
How to slice a model to ensure at least a certain amount of filament per layer?
See more linked questions

4
How do I repeat the layers of Slic3r for every 3 infill layers with different angles? (Might need some programming knowledge)
4
Ultimaker Cura infill issues (weird vertical pillars due to underextrusion)
4
How are infill paths connect to form an efficient path that respect the object's geometry?
4
Infill failure at the far corner of two different prints
3
Ultimaker Cura 3.6 choosing to fill in narrow walls with diagonal striping
6
Uniform squishy infill
4
Slow down first layer above infill in Ultimaker Cura
2
How to slice a model to ensure at least a certain amount of filament per layer?