The title almost says it all.

I was searching on websites like amazon.com and ebay.com for a replacement of the temperature sensor of my Ultimaker 1, but could only find replacements for Ultimaker 2 (PT100), but I know those aren't compatible.

What specifications have replacement temperature sensors that work with the tc2 signal amplifier of the Ultimaker Original?

You need a thermocouple, not a thermistor. Also, as you say the Ultimaker Original+, and the Ultimaker 2, (which both use version 2.x.x boards) use a PT1001.

According to this post, on E3D Thermocouple mount on UMO+, a k-type thermocouple will do:

I am changing over to E3D V6 on my UMO, and have elected to used the k-type thermocouples sold by e3d with the standard/original UMO amplifier board.

Or to be more precise, from this post, on THERMOCOUPLE SENSOR REPLACEMENT, it is a 3 mm k-type thermocouple:

I would ask the reseller to measure the thermocouple to be really 3mm. I never bough a thermocoupler so no idea. I know that some aliexpress sellers did sell me a pt100 with 3.05mm (it doesn't fit in) so is good idea to ask for a photo with a caliper before paying.

Or this, considerably more expensive at €33, Ultimaker Original - Thermocouple Sensor (out of stock): 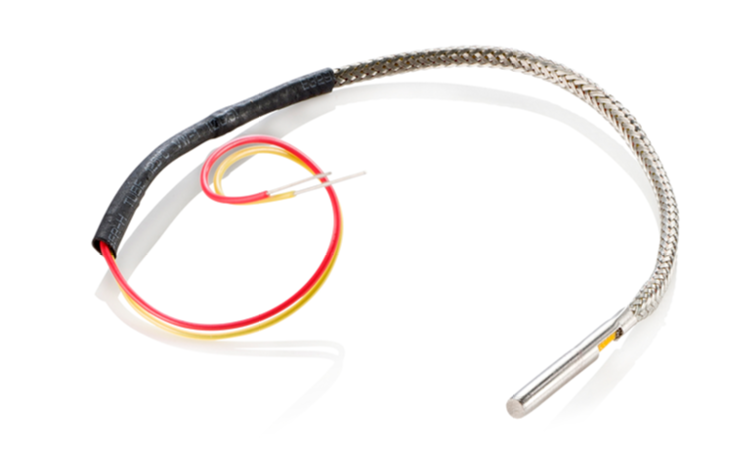 With respect to the firmware, from this post, on E3D Thermocouple mount on UMO+

Normally you won't have any modifications to do cause your UMO already works with a thermocouple.

However, according to Questions about thermocouple and thermistor, the UMO board is 1.5.7, and can use NTC100K thermistors and (maybe - but it isn't clear) a 4.7K pullup resistor:

Firstly we have to do the Challenge with a Sainsmart UM Kit with that UM 1.5.7 Board.

We also have bought the print heads by E3D model V6 which have including ntc 100k thermistors which have already tables in marlin. As the V1.5.7. Board works with thermocouple, there was the question how to connect this. I got already an answere to just connect Signal and GND, to the board but I'd have to look for the resistors behind the connectors. Is it true, that I need a different resistor for each type of thermistor?

However, it is probably advisable to stick with the 3 mm k-type thermocouple, for simplicity's sake.

1 Apparently for these reasons, from this post, on THERMOCOUPLE SENSOR REPLACEMENT:

The UMO has the 'old' UltiBoard 1.5x which is a shield for an Arduino Mega, with the Pololu / Allegro stepper drivers plugged on it (Like the RAMPS controllers).

At that time RTDs where not very popular, and most printers came with thermistors. To improve the temperature feedback loop Ultimaker decided to use a thermocouple with an amplifier on top of the print head, which gives better results in particular at higher temperatures.

If you want to use a thermsitor instead of the thermcopule, you just have to swap the connections, and add a resistor on the board (the place for the resistor is foreseen on the board).

You can even go for an RTD using E3D's adapter plate.

Note: RTD = Resistance Temperature Detector (such as a Pt100). A thermistor is similar to an RTD, but contains a ceramic or polymer resistor en lieu of metal.

Not the answer you're looking for? Browse other questions tagged replacement-parts ultimaker-original or ask your own question.