What are the advantages of gyroid infill?

I've seen a few print time-lapse videos lately which use gyroid infill: wavy lines, which deform across layers so that the waves end up alternating between the two axes. Other than making the time-lapse videos look much cooler, what are the benefits of this infill style compared to the more common hatching or cross-hatching?

From this reference you can read that:

A gyroid is a naturally occurring structure which be found in butterfly wings and even within membranes inside cells. In 2017, MIT researchers discovered that when graphene was shaped into a gyroid structure, it had exceptional strength properties at low densities. They then discovered however, that the crucial aspect of this was actually the gyroid structure itself, and that other materials such as plastic could benefit from this.

It is assumed that this type of infill has better properties against failure than the normal types of infill we know.

A test conducted by an author named Martin is found here. He printed test specimen and subjected them to bending to test the resistance against shear stress.

From the figure can be concluded that the gyroid infill has a better resistance against bending for a lower weight.

The advantages of gyroid infill over the tested infill types are:

On top of these advantages Gyroid infill prints relatively fast with respect to some other infill types and is close to isotropic (i.e. uniform in all orientations), meaning that is very suitable for flexible prints.

0scar gave a great answer, but I wanted to add to it.

Stefan of CNC Kitchen does a lot of 3D printer technique testing. He covered the gyroid and other patterns. While there's a difference in filament used, the significant differences are strength* and print speed. Here's his 8-minute infill pattern testing video; some screenshots follow. I stopped printing honeycomb once this video came out. Perhaps I should switch to gyroid too. 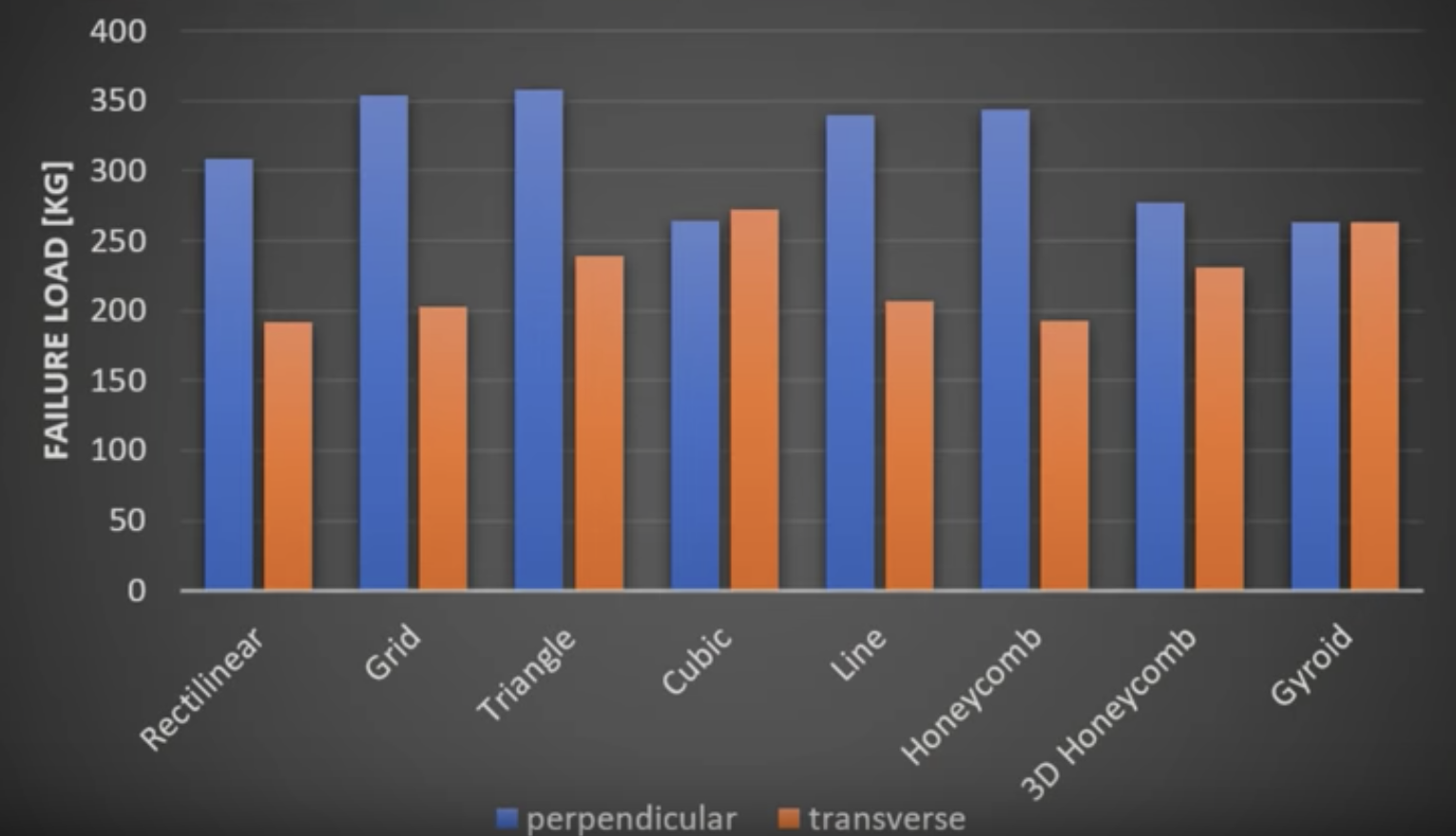 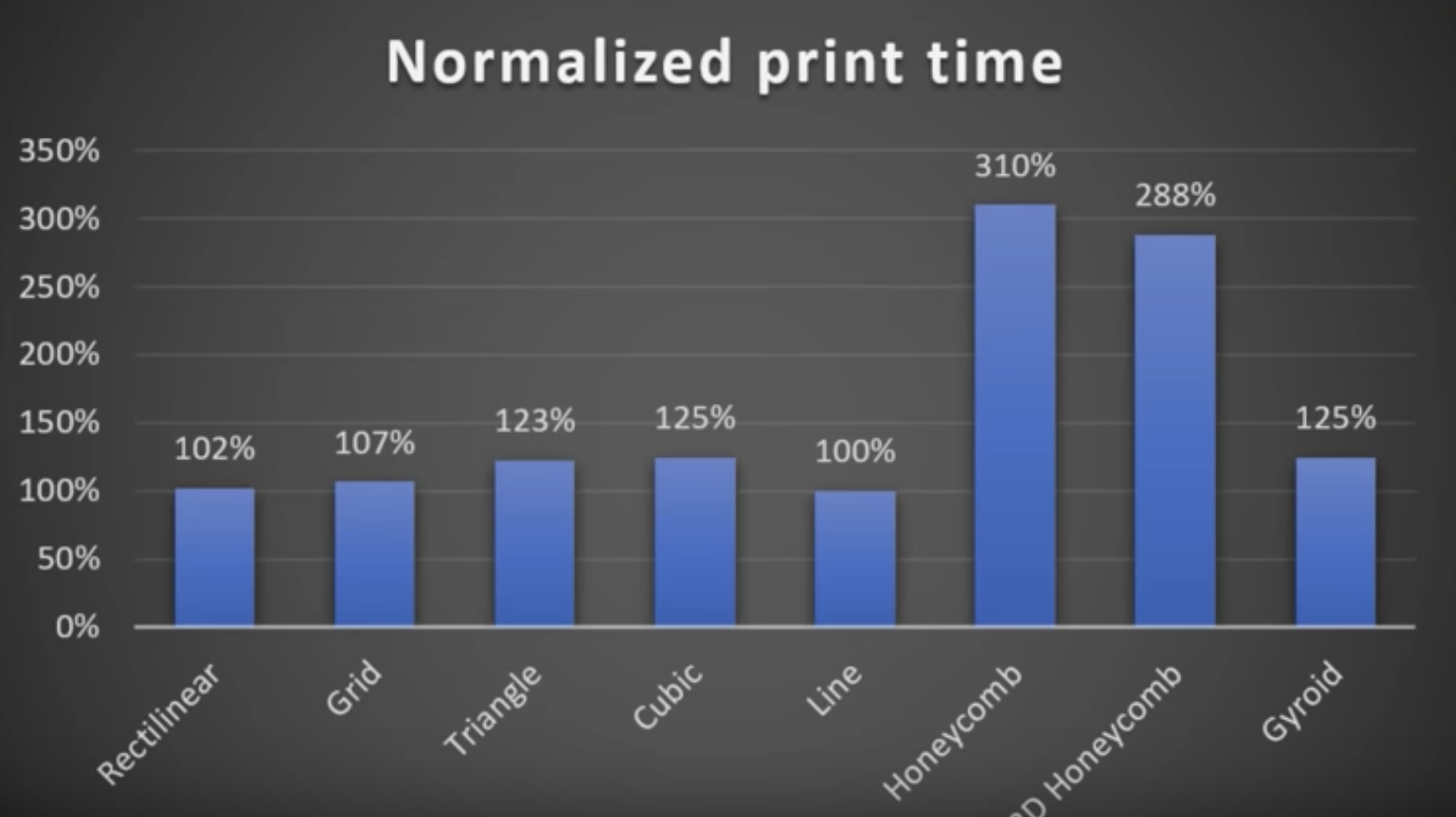 * yes, I'm calling it "strength". Don't at me, physics and materials science peeps, I know it's inaccurate.

This answer builds on to both 0scar and tedder42's answer:

From their experiments, it is reasonable to conclude that gyroid does well on sheer strength, and above mediocre on compressive strength.

Martin's experiment (Note how he used a bottle of water to test different structures for their shear strength):

Stefan of CNC Kitchen's experiment (Note how he used his self-made machine to compress different structures):

Examples of gyroid's aesthetics can be found in Matt's links:

About a decade ago, we looked at the 'Gyroid infill structure' (which we called sheet solid). We looked at it as a linear-elastic solid and as possible bone scaffold design:

What came out of that study that lots of the triply-periodic minimal surfaces (a broader class of structures that comprise the Gyroid) had interesting elastic moduli.

One thing that's worth noting though is that the Gyroid is not isotropic. Rather, it has cubic symmetry, ie 3 rather than 2 linear elastic constants. But it comes fairly close to isotropic

6
Square and parallel infill patterns
24
Different infill in the same part
4
How are infill paths connect to form an efficient path that respect the object's geometry?
4
Infill failure at the far corner of two different prints
1
Why does infill percentage stop the print from sticking to the bed?
6
Uniform squishy infill
3
Infill keeps “shoveling”, but perimeters are fine
5
What is the best infill pattern for shearing strength?
1
Infill not printing well. What I am doing wrong?
0
Custom Infill Pattern Based on Self-Generated Geometry