I am trying to convert this into an STL file to print in my 3D printer however I am having no luck in converting this into a mesh I can use. I have tried multiple approaches with the different files that are listed but cannot seem to get it to properly convert to a mesh. I have tried the following so far:

-Import an .xyz file into MeshLab to convert it to an STL. After I import it looks like nothing imported and I can't navigate around in the file

-Import an ASC file into MeshLab to convert it to an STL. After I import it, I get no errors but the output is a long, thin mesh that looks nothing like lake Michigan

-Just for a test, I imported the .xyz file into Autodesk ReCap just to see what would happen. I noticed that the points were in a long thin area similar to the ASC import but as I browsed around I noticed that the each layer of dots was the actual Bathymetry contours.

I have tried multiple approaches and software beyond these but can't seem to get the files to convert into a printable mesh that I can manipulate to send to my 3D printer.

In order to properly get an STL file out of a point cloud, you'll need some tool to help triangulate the points to create proper vectors. The shell that is created in an STL is what the slicing engine will "slice".

I'm not as familiar with the full potential of MeshLab, but I would think this tool is best suited for files that at least have most of shell already in place. Essentially best for fixing STL's.

In the past, I've used (the very expensive) Unigraphics NX8. This CAD/CAM software is very powerful and has tools for creating meshes out of point clouds. I believe it was the sew tool that allowed me to do this in the past (I no longer have access to the software). Other CAD programs such as SolidWorks, Rhino, AutoCAD, etc. might have similar features.

Alternatively, I think it looks like you might be able to convert a 3D point cloud in SketchUp. If the cloud is layered by height and each layer had points on the same -Z- plane, then you might be able to automate creating lines between the nearest points on the same plane. Then it might just take a little bit of manual labor to "fix" the model to become 3D printing ready. Also check out this forum post, it looks like someone had luck in converting terrain point clouds.

Completely alternatively, have you considered converting an image to STL? I've done this many times before and it turns out quite nicely. If you can find topographical map of the lake, you could alter the image into grayscale (play with it a bit). Then use software to convert the grayscale image to STL.

I was able to download the file collection from the link you posted, although I used none of the Grid files, as they seemed inappropriate to this task. The shape files were then imported into AutoCAD using the trial version of Spatial Manager.

The resulting drawing indicates that it's in 3D. When the 3D orbit tool is selected, the image rotates a flat drawing.

I saved the AutoCAD DWG file and imported it with SketchUp, ostensibly not the smartest program for this sort of thing. The result was a flat image, not a 3D one.

I suspect that the resulting flat drawing IS the image and cannot be 3D printed, unless you have reason to believe otherwise. 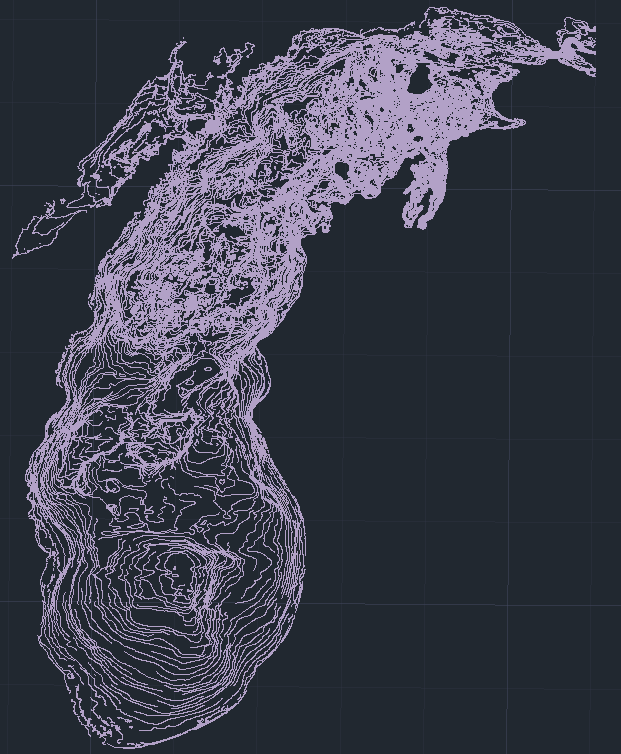 You can do this using MATLAB, or possibly Octave (the open-source version of MATLAB). I'm doing this right now to print a globe with exaggerated topography and bathymetry. MATLAB has tons of tools for importing data. I'm sure you can import the Lake Michigan bathymetry data, though you may have to hunt for an importing script on the MATLAB exchange.

As long as you can get your data imported as a 2D matrix of X, Y and Z values, you can use the surf2stl() function by Bill McDonald, available here:

This creates an STL you can use. Note that it's just a surface, so you'll need to give it depth some other way so your printed object isn't paper-thin.

Not the answer you're looking for? Browse other questions tagged software 3d-models or ask your own question.

7
Why won't makerbot accept an STL file from Blender?
2
How can I convert .STL file to .OFF to use in CGAL?
4
How can I see what errors Slic3r have repaird?
4
Slicing adds holes/cracks to my object
3
Is it possible to convert a Las /Laz file into an STL or OBJ file?
2
OpenSCAD to Flashprint ruins model based on number of fragments
6
Easy way to refine a 3D-model for 3D printing by removing internal geometry
4
Combining multiple STL files
4
Delete only invisible parts of faces
1
Printing 3D letters in any font?