"plane Cut" on a curve

I have a cosplay prop that I am trying to cut up into pieces so I can print them out in different color filament eliminating the need for any painting (it's the Handle in Mercy's Caduceus Staff from Overwatch). I was going along great using Meshmixer creating face groups, then generating complex, then separating complex, until a certain part where I tried to separate a part that has a hole going through the middle and smaller holes for screws (using this tutorial, YouTube - Splitting 1 STL into 4 STLs for multi-color & multi-material 3D printing with Meshmixer). I think Meshmixer is getting confused though since the topology of the part technically meets up to itself and has what could be considered multiple joining edges.

I was able to fire up Netfabb and get something close by doing a Polygon cut, but it's not accurate enough. It left a bunch of tiny pieces all over the place where I didn't quite get right at the vertices.

Ideally I would like to have a cutting tool exactly like the polygon cut in Netfabb but that allows you to choose actual Mesh triangle edges as your cutting edge to project through your mesh. Anyone know if there is a piece of software that can do something like that? I also considered attempting to "fill in the hole", separate my complexes, then Cut the hole back out, but I don't think that would work very well.

For reference, here is what the part looks like. I'm trying to separate the green piece from the rest of it. 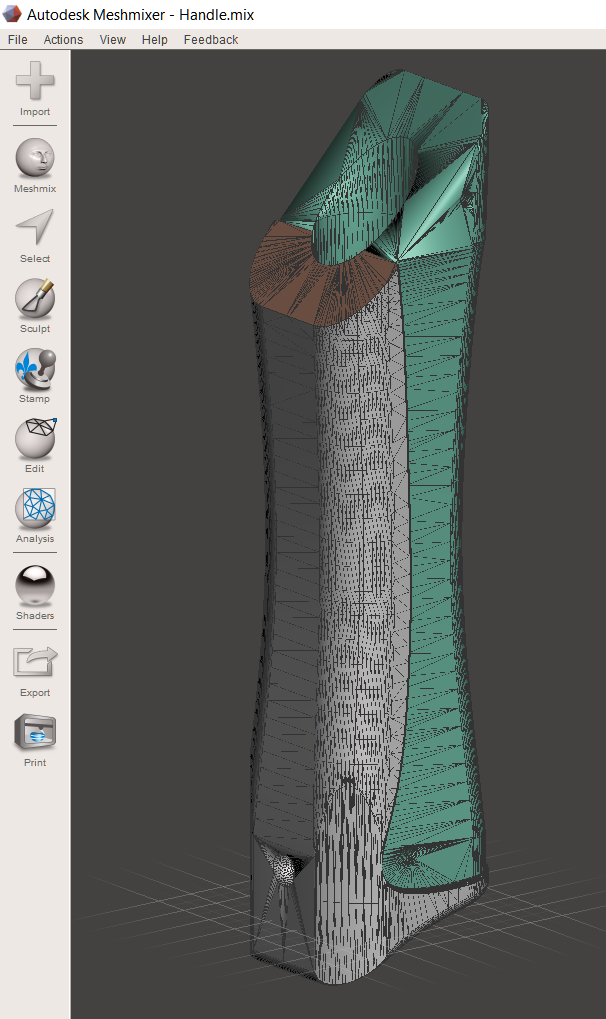 Browse other questions tagged stl or ask your own question.