What causes ripples on part of first layer?

I'm having issues with ripples on the first layer of big flat prints. The initial corner of a big flat print is fine, but then ripples begin to form as shown in the screenshot.

I'm just a newbie, so I was thinking they might have something to do with heat or contraction or something. Normally, I use the default and print with no turbofan on the first layer. When I tried adding fan 20% or 50%, nothing much changed (slight differences in the ripple pattern and area, but that pattern varies anyway).

I also wonder if one strip gets bent, then maybe the rest just follow the bends. As far as I know, my heating plate is working fine, has no serious hot spots, and I'm using a high-quality PLA+ filament. I also tried adjusting the print temperature from 205-220 (the range on the box is 205-230). Nothing seemed to help. I am running a default first layer thickness of 0.3 mm because that is supposed to help adhesion (and adhesion is fine).

The ripples look worse than they feel. They feel fairly flat, only slightly rippled, even though they look terrible! (And I don't know what that weird row with blobs is in the top left of the picture. That only happened once; almost like junk was in the nozzle or the feed gears slipped or something).

Does anyone know why this rippling effect occurs, and what I might to do to correct it? Thanks

UPDATE: I'm adding this info here to respond to several comments concerning bed leveling, etc. (Thank you to those who made comments!)

1) I'm sure that the bed is as level as I can make it because I always go through the cycle twice).

2) Regarding clearance, if anything I worry that my clearance is too small since there is a fair amount of drag on my leveling card under the nozzle. So, there is definitely drag on all three level points, about midrange between the lightest drag and the heaviest drag that makes me think I'm filing off part of the nozzle.

It's worth saying again that the piece feels pretty smooth on both the top and bottom sides, even though it looks awful. I don't know what to make of that. 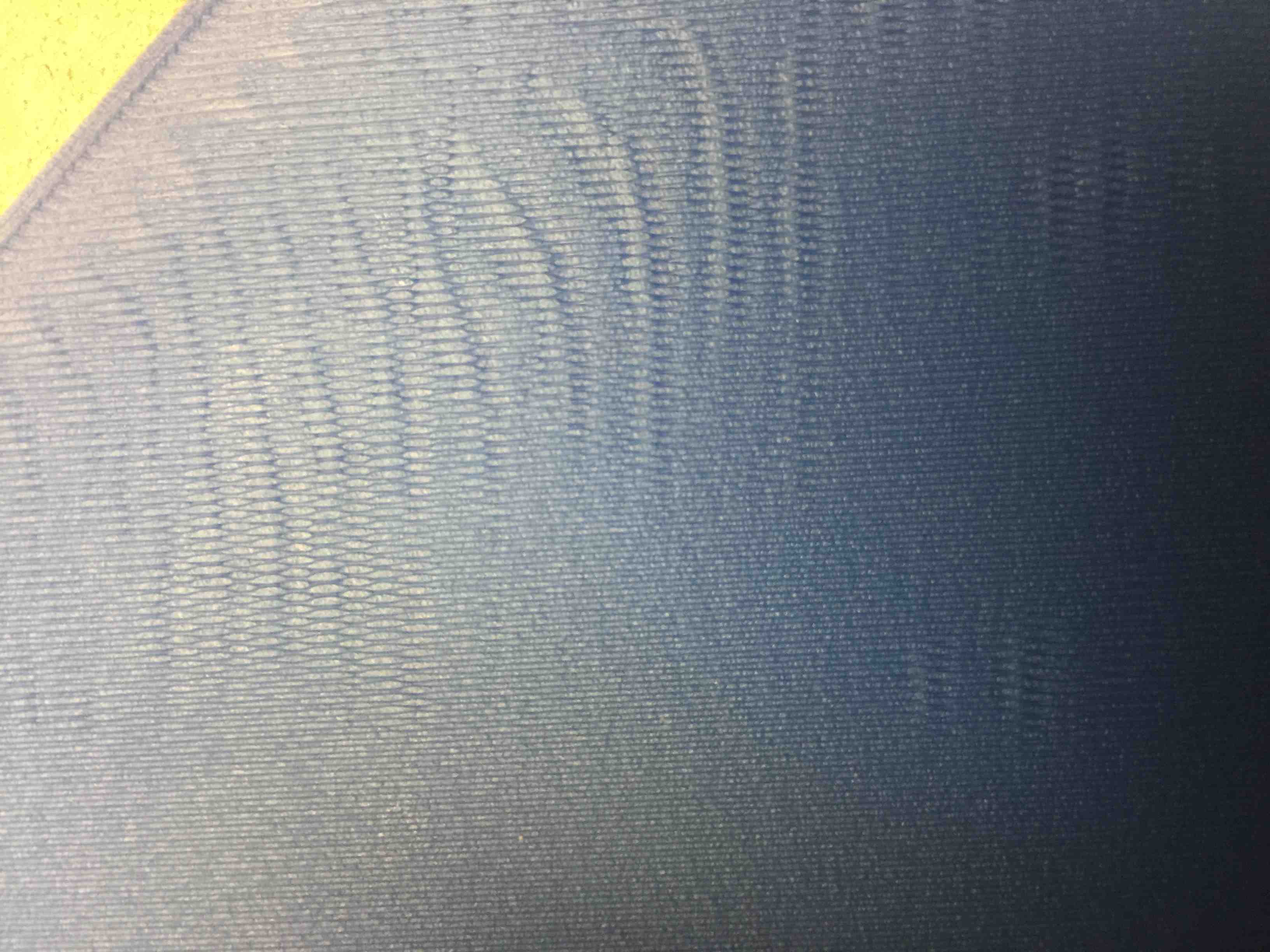 First layer rippling is usually caused by a too low of a first layer height (for the amount of extruded filament).

Are you sure that:

To minimize the effects, you could try to:

This usually helps fighting these ripples.

The following image shows the problem. I was running with a default 0.3 mm first layer (the tooltip setting says a slightly thicker layer helps with adhesion). The build plate was correctly leveled with "midrange" friction on the leveling card at the leveling points.

Problem cause: The midrange leveling height put the nozzle too close to the plate and caused rippling. The first layer thickness was set to 0.3 mm and the thickness of the leveling card was 0.25 mm.

The following image illustrates the problem (and one of the solutions). The bottom right of the image shows rippling. Not knowing what else to do with the "too close" or "too far" or "unlevel" tips in the comments, I just manually lowered the build plate knobs 1/4 turn while the print was in progress. The print began in the lower right. You can see the smooth area where I manually lowered the build plate. Then, to be sure, I raised the plate by restoring the 1/4 turn on the knobs. The rippling returned. 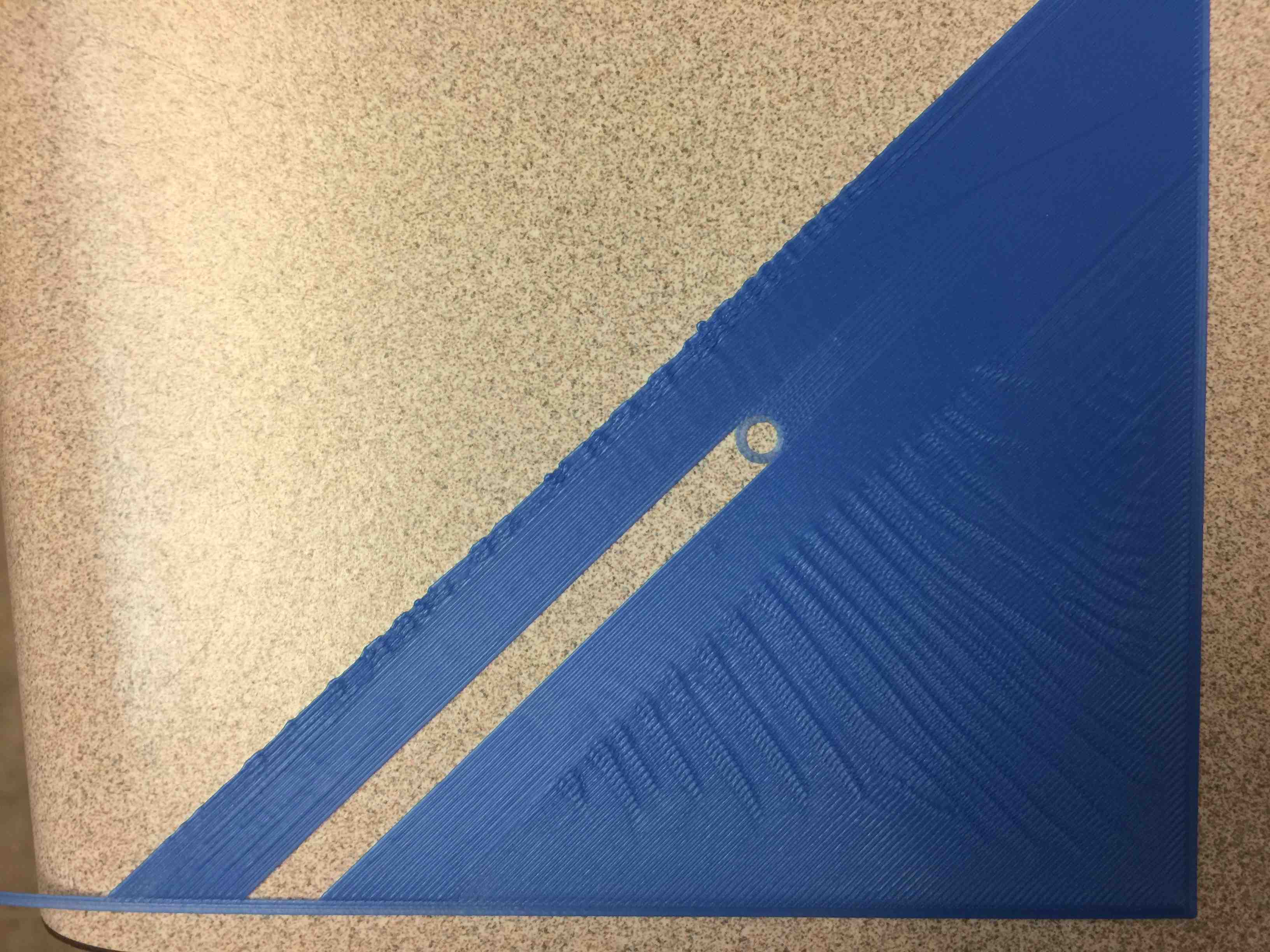 To further explore the 0-90 degree suggestion provided by profesor79, I changed the slicer degree settings to 0-90 degrees and set the first layer thickness to 0.2 mm, which was equivalent to lowering the build plate knobs by 1/4 turn. I kept the same "midrange" friction settings when leveling. The result was a first-layer print with no rippling. 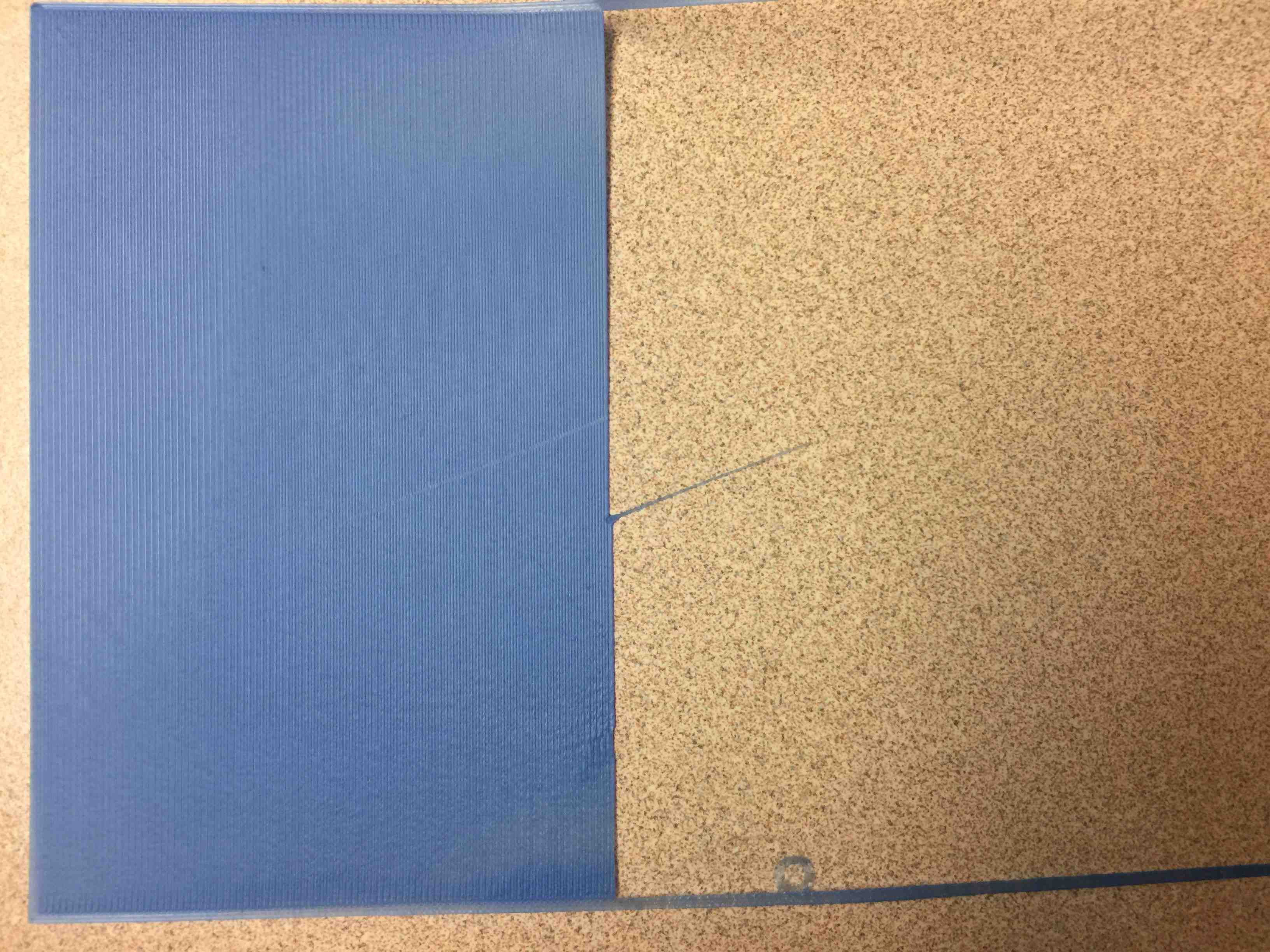 From this experience, I think:

Thank you again to everyone who contributed ideas to understanding the problem. It's hard to pick any particular answer because the solution involved multiple ideas, so I have added my own answer to share.

Not the answer you're looking for? Browse other questions tagged print-quality pla smoothing .

4
Ripple in layers
0
Help troubleshooting: wavy/lifting lines
5
Prusa i3 Mk3 - Top layer wrinkles (not on buildplate)
2
How do you level (or tram) your build surface correctly?
1
What cause the pattern in a large area?
1
Speed bump like structural distortions in 3D printed samples

10
What is causing 'droplets' on first layer?
1
Strange banding on first layer/skin
2
First layer prints too thin causing gaps everywhere
3
My first layer becomes solid when sections are supposed to have small separations
9
Expansion in bottom skin after first layer
2
Stringing on first layer unless I squish it
3
Need help printing a quality first layer, but having adhesion and fill issues
1
What cause the pattern in a large area?
0
"Blobs" at beginning and end of layer and no adhesion