I just bought a 3D printer => Geeetech Prusa i3 b.

I build it myself and I'm trying to print the famous boat, the Benchy one. 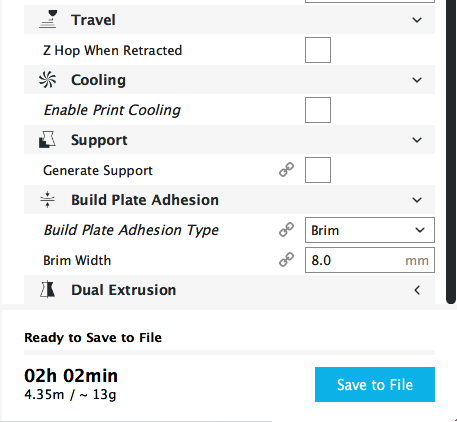 And that's the results..

Any tips about the settings? The problem seems to be when I print every other layer but the first one which seems reasonable enough.

I used Slic3r with the settings taken from this video, eBay Prusa i3 slic3r settings (comment response video)

Now the first layer is almost perfect but I still have problems with every other layers, too much filament comes out and it's all messy, a bit like the picture I posted above.

A video of the print can be found here.

From the images you posted, it is clearly visible that you have a mechanical/calibration issue. Your belts are probably not tight enough too, but it is difficult to say at the moment as the products are way off from what they should look like.

Note that the printer configuration could be incorrect (although very unlikely as it is out of the box). E.g. the stepper motor needs to make a certain amount of steps to advance the carriage in Z direction. If the mechanical layout requires 400 steps per mm (which is typical for TR8x8 (p2) lead screws on 1.8°(200 steps per revolution) stepper motors and 1/16 microstepping) but is configured as 800, your layer height advances twice as much although the Z=0 level would be okay! I now read (from the updated question) that the value for the steps/mm for the Z axis is 2560, this implies that you are using M8 lead screws with a pitch of 1.25 mm on a 1/16 microstepping board and 200 steps per revolution steppers.

From the specifications of your printer follows that the Geeetech Prusa i3 Pro B uses:

This image show the configuration of the axes:

Your initial leveling and height setting is incorrect, when you printer is at Z=0, it actually is positioned higher. Hence your first layer has very bad adhesion and is not properly flattened and each consecutive layer shows the same problems of falling hot filament. When the speed increases on the next layers the hot filament deposition cannot follow the nozzle, hence the "spaghetti" looks.