RAMPS board - no power to heatbed

I'm setting up my first 3D Printer, a Prusa i3 MK2 clone. When I try to heat the bed, nothing happens. Then Marlin throws this error after a while:

In Pronterface I see this in the console:

There is 0 voltage across D8 on the Ramps board, where it is connected. When I heat up the hotend, on the other hand, which is connected to D10, I see 12V across the board's D10 terminals.

My axes, extruder hotend and fans are working OK.

I previously burned out the 5 V regulator on my Arduino Mega by misconnecting one of the end stops. I replaced the regulator on the board and the 5 V supply seems to be working OK again. However I wondered if I might have damaged the board in some other respect? Or is there a config setting in Marlin I should change?

Without testing the board(s) completely, by probing each component, it would be a bit hard to tell precisely. Your best bet might be to try it and see if it works ok, and if not, you'll see exactly what doesn't work... if that makes sense. Whilst not exactly the same issue, this answer, to the question How drastic is reversing the polarity of the power supply to a RAMPS board?, might help.

Now, after having correctly read your question (:-D), I see that you've already done the above, that I mentioned. Maybe these links will help:

There are other similar links on the RepRap Wiki. You might need to check the power MOSFET and/or the fuse. The problem is knowing whether the Arduino Mega is damaged, or the RAMPS board, or both.

However, perform some of the relatively simple checks, listed below, for the:

Salient points from (RAMPS)Hotend change pin from D8 to D10

Also... There is something else to be aware of. Depending on what you claim you are attaching to the RAMPS board, the pins move around. You have 3 High Power MOS-FET's. You can use the RAMPS board to drive some combination of heat bed, fan and 2 extruders. Depending on what you claim you have on your printer, the pin numbers for things move around.

I kind of doubt that is what is causing you problems... But it might be...

and check the config (bit of a long shot)

Have you checked that you don't have any error condition (such as MAXTEMP or MINTEMP) which prevents the hotend from being switched on?

Your topic says "D8 to D10" but if this is your heated bed, you can't do this. D8 is on the 11amp circuit. plugging the heated bed into D9 or D10 goes threw the 5amp fuse and it will blow.

To test the outputs:

But basically test the io ports

load up the blink demo program, change the port it uses to the port you testing. Upload firmware (this will overwrite you current firmware) Does it blink? yes the IO pin is ok, no, The IO pin is dead.

repeat for all io pins you which to test

Salient points from No power to heatbed, how to test ramps for problem??:

Check the fuse (the big yellow thing). Connect you meter to ground and both sides of the fuse in turn. You should get about 12v on both.

continuity test the heated bed with it not plugged in. is it possible you have an open in your circuit?

Have you checked the cables? Also is the led coming on for D8?

The next section of the thread deals with an overheated (50 A?) MOSFET. Check the condition of that:

ok think i found the culprit, any ideas why that blew? 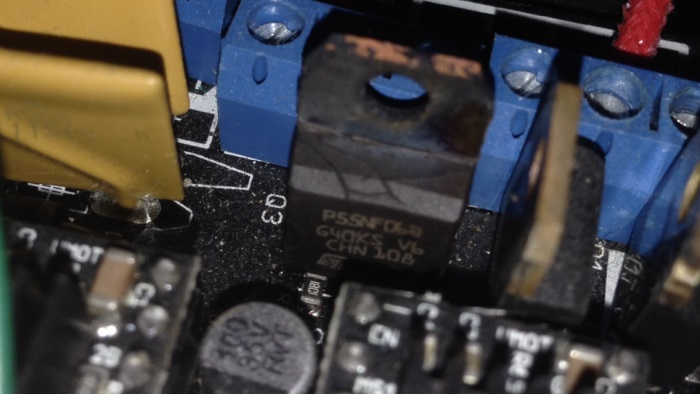 A couple of good points

With the bed I found there are 2 issues at play here.

but seeming as your transistor blew I imagine the polyfuse is ok, watch out though you may find it slowly does kick in when the MOSFET works properly because if its near its tripping point it can gently heat up and stop the current.

That's not the way it's wired. Check the schematic.

As you can see, the MOSFET is switching the GND connection to the bed. There will always be +12V on the + bed terminal whenever power is on as long as the fuse is good. There's an LED across the + and - BED terminal on RAMPS to indicate voltage. If that LED is turning on when you turn the heated bed on from the host software, then the MOSFET is good. If it's not coming on, they you might have a bad MOSFET or your +12V supply is bad. Verify using a voltmeter across the bed terminals and across the 12V bed supply input in RAMPS.

The Prusa heated bed PCB should have a resistance around 1.1 ohm. 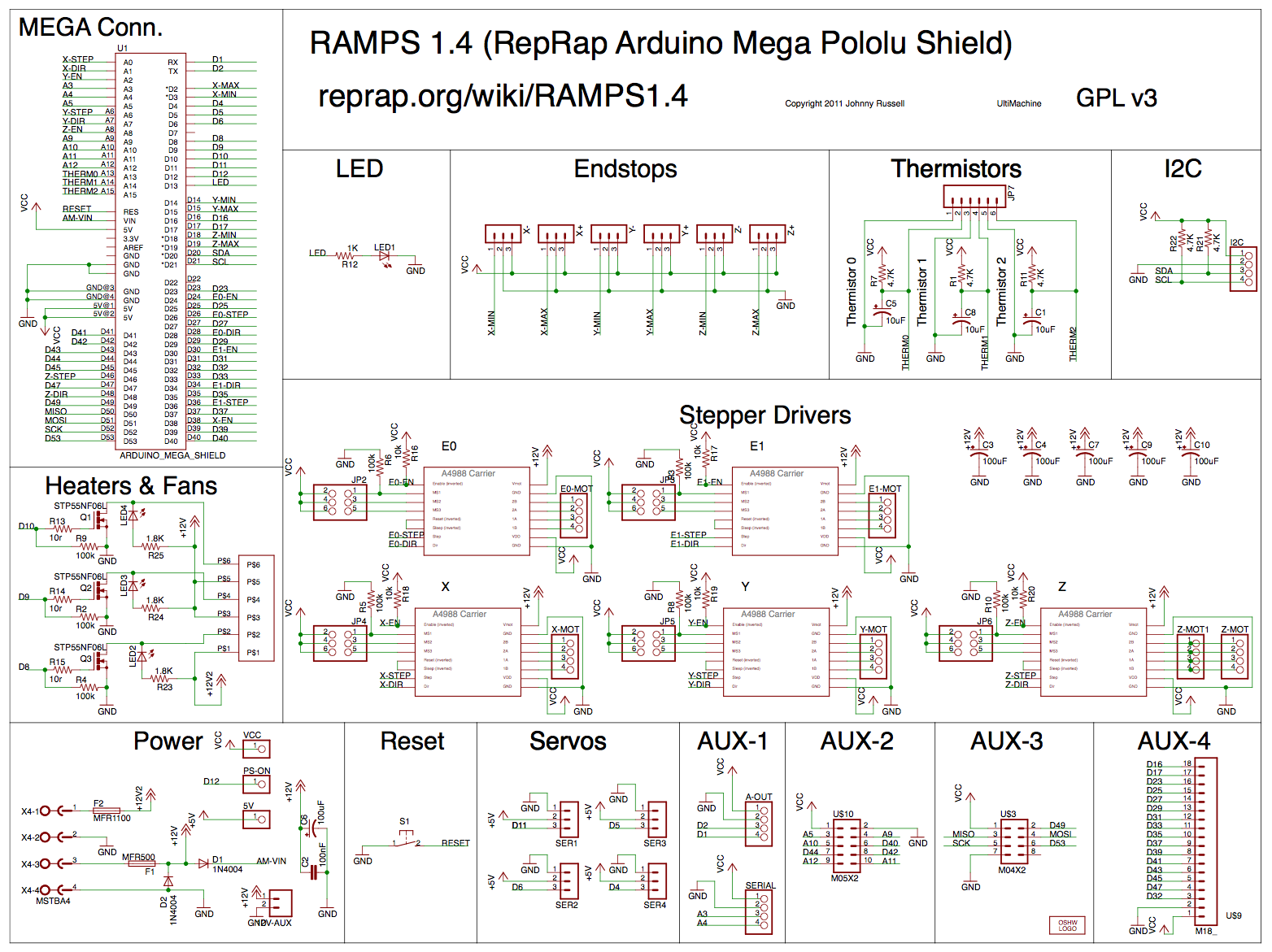 Then there are some tests for the fuses. Looking at fuse F2 (the main culprit, which protects the 12V2 circuit):

You should visually check the solder pads for the MOSFET to make sure that all the 3 pins are still soldered well. The chip can get hot enough to melt the solder resulting in broken connection. Then with the power on, turn on the bed heater in the host software and measure the voltage going into the gate pin of the MOSFET. That should be the outside pin on the same side of the MOSFET as the + D8 terminal. You should see TTL voltage there (probably close to 5V). If you do, then it confirms that the MOSFET is bad.

BTW, 1.5 ohm is probably too high for the bed resistance. You need to subtract the resistance that you measure when you touch your multimeter leads together. There could easily be 0.4 ohms there.

As far as checking the fuse, another way would be to turn off all the 12V power to RAMPS and check for continuity between the + bed power supply input and the + bed output on RAMPS. If the fuse is still good, this should be a short (near 0 ohms). If you disconnect the + lead to the bed, then this would be more accurate.

For fuse F1, you can do the following, although it is extremely unlikely that this has blown as the rest of the circuit is working from the 12V circuit:

There's also a separate fuse for the other 12V supply input to RAMPS that powers the rest of the controller, including the AT Mega. You should check that too in a similar way. With all the power off, measure the resistance between the leads of F1 on RAMPS. You can also double check the resistance on F2 (bed 12V fuse) right next to it.

That should give you something to get started on. Without knowing more details, it's hard to be more precise.

The problem was that one of the pins on the Ramps board power supply header was not soldered. The manufacturer had omitted to solder one of the pins, so there was no power to D8. Fixed by soldering the pin in place.

Not the answer you're looking for? Browse other questions tagged prusa-i3 heated-bed ramps-1.4 troubleshooting or ask your own question.

5
How drastic is reversing the polarity of the power supply to a RAMPS board?