How could I print a large sphere-like object?

I have a STL file with a rather large roughly-spherical object. I'd like to 3D print it to be fairly large, and hollow inside. Since the printer I'd be using has a max size of (18–20 cm)^3, I'd have to print this in pieces and then reassemble them into the sphere-like shape. The textured surface of the object is important, but small seams would seem unavoidable.

How could I 3D print a hollow sphere or sphere-like object that's too large for the available basic 3D printer?

Because this would need to be done in parts, it's more complicated than the designs I've made. Because the final product is roughly spherical and hollow (i.e. nothing is nicely angular), it's trickier than some other designs.

(I have little experience with 3D modelling/CAD, so I'd somewhat prefer solutions with minimal advanced steps such as designing my own joints and whatnot...but advanced steps are definitely okay if part of a great solution!)

My Ideas So Far

I know I could cut the sphere roughly in (e.g.) eighths via planar slices, print the eight pieces individually, but then the question is how to attach them. I am also concerned that the seams might be too noticeable. (Perhaps there's a better way?)

I could just glue the pieces together. My fear then is that it would lack internal structural support if they were attached only at the outer layer (unless the skin thickness were excessive, at least near the boundary).

I imagine I could give the pieces internal supports with dowel joints or snap-fit joints (e.g. these), but I lack knowledge of how to do that and don't know whether that would even work well.

A sphere can be put together quarters easily, but those need support in the center. However, there is a slightly different cut is more economic: 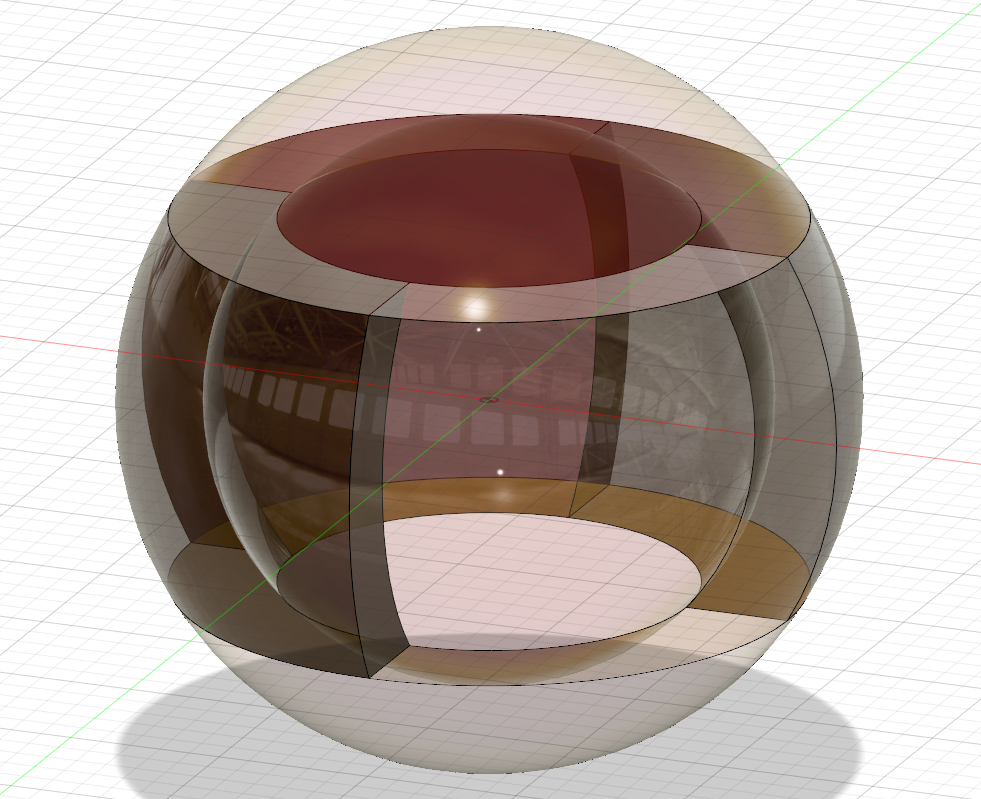 This way, the support material can be reduced to a minimum - only the top and bottom will need any support, and it is easily accessible to smooth it away.

If the walls would be something like one millimeter thick, any good glue should work. If you want to reduce the visible seam, you might bevel the faces, so that the wall has a little gap on the inner wall. As most glues shrink as they harden, it will flatten into the "gap", evening out the internal face.

2
How is the print time of an object to be printed estimated?
3
Is there any setting that could allow me to print this overhang without support?
4
How can I have a large 3D printed object?
4
How to correctly print an object with supports
4
How to print a voxel object?
3
What's the best way to connect pieces of a large print after printing?
2
How to accurately print a thin piece with a hole pattern