Current main problem is that at various points during a print, one layer doesn’t attach well to the layer below it. That is what appears to be causing the artifacts in the second picture below, but the picture may not show it clearly.

I have a Makerbot Replicator 5th generation printer. This is the one that is very locked down. As far as I know it can only use the slicer it comes with, Makerbot print, but I'd be happy to be told otherwise. It only prints in PLA and @Trish gave some good advice on drying out the filament. I've also leveled the print bed. Prints have improved from where they couldn't even finish to now where they just aren't very good quality.

The issue I'm having now seems to be primarily that one build layer sometimes doesn't stick to the one below it very well. Then they peel up and the nozzle pulls them and re-melts them into a blob. I've attached two pictures. It's worse in the first one, then I lowered the first model layer fan setting from 50% to 45% and it improved and I was able to get the print in the second picture.

Any help on what settings I can change would be great. Is this because it is underextruding? I think I'm stuck with whatever setting options are available in the Makerbot.print software. 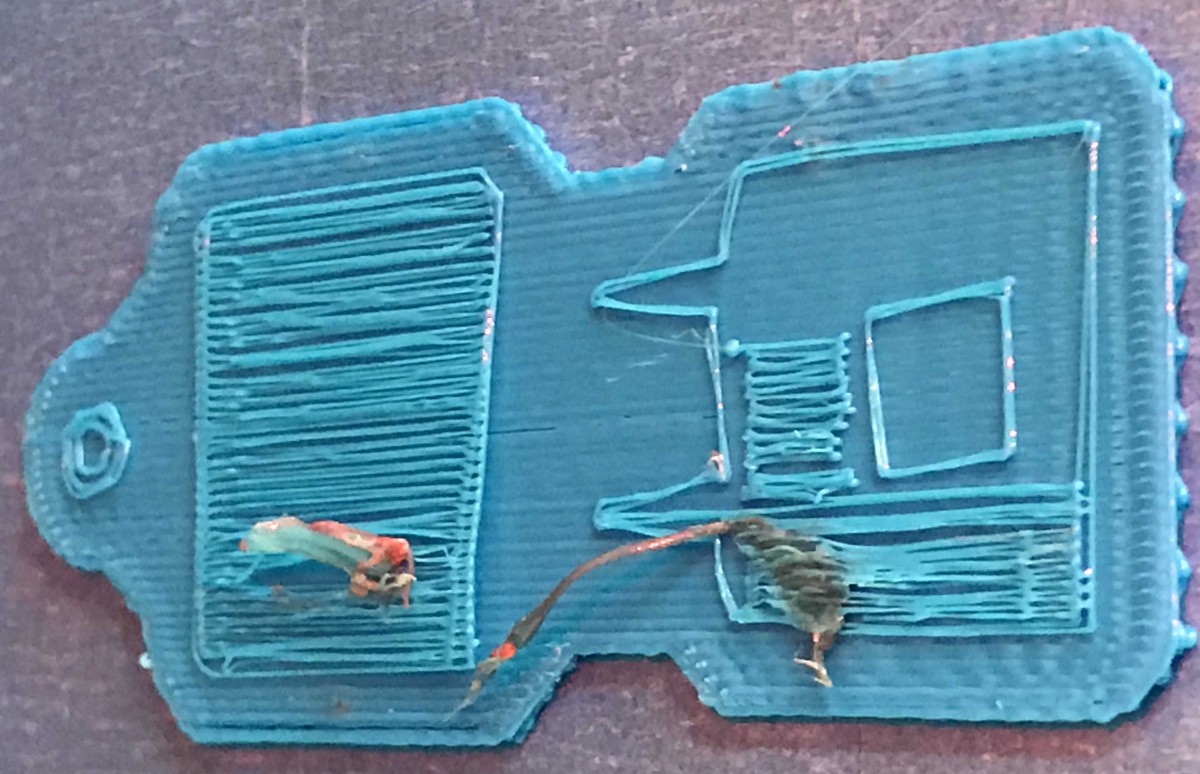 The default print temp for this printer is 215. This is at 210 degrees, but those blobs aren't actually burned they are a mix of the previous red filament that was on the outside of the nozzle. The travel speed is 150 mm/s, First model layer print speed is 30mm/s, Raft to model shell vertical offset is 0.26mm, Raft to model vertical offset is 0.33mm (I can't tell what the different between those is), z-offset is 0 (default), Layer height is 0.14mm. In the second picture the print was attached but separated easily from the raft.

A couple more settings that might matter is the Print speed: Outlines is 20mm/s, and the Print Speed: Infill is 90mm/s

I made several of the changes suggested including lowering the temperature, leveling the bed, adjusting the Z-offset, and lowering the infill speed. I also continued to dry the filament in a dry box with a lot of desicant that I dry periodically. The desicant seemed to make much more difference than drying the filament at 50C for a couple hours. Print quality has improved a lot, but isn't great. I'm coming to the conclusion that the filament has been damaged by poor storage. It has been left in a drawer in a humid, hot room over the past summer or more.

I'm still using a raft because prints fail completely without it and work reasonably well with one so I have no problem using a raft. Now most of my problem is blobs of filament that I think are running down the nozzle from the heater core. I may have to take some timelapse video to figure that part out. I'm also having some stringing which may be a filament quality issue and some layer shifting.

Your printer is improperly leveled with respect to the distance of the nozzle to the bed. This, and a high raft to print part distance, causes consecutive layers to not adhere well.

PLA should not need that high temperatures to print nor does it need a raft. Rafts are interesting when printing filaments that have high shrinkage. Furthermore, a 90 mm/s infill speed is pretty high, and do not use the part cooling fan for the first few layers (if you cool too much it can curl up).

You need to re-level the bed and make sure that the nozzle to build plate distance is the thickness of a sheet of A4 paper when Z = 0.

Reading your print settings, I noticed some oddities:

These are settings one does not expect for PLA but seem reasonable for ABS. The 215 °C could be reasonable if

Common PLA is printed with

* As far as I know, that Mk 8 does not reference which manufacturer designed this thing, which makes it a kinda nonsensical naming. Mk 8 is short for Mark 8, so by definition the 8th iteration of a specific product.

Not the answer you're looking for? Browse other questions tagged print-quality pla makerbot or ask your own question.