Can I print and sell 3D models licensed under CC BY-NC-SA 3.0

Can I Print models from Sources like Thingiverse and sell them ? I will be only charging the print costs and will provide full credits and attributes to the original creator of the model (with links to their profiles) in my web-page.

There are websites like 3dhubs where the seller will print any file the user uploads. Similarly I want to charge only for the printing services.

I am not an attorney, so this isn't legal advice. Like any legal question, you should consult with an actual attorney, who can consider all the gory details.

That said, it seems like you've got the BY and SA parts covered. "Non-commercial" is more difficult: does a sale that's not for profit count as "commercial"?

The Creative Commons site (https://creativecommons.org/faq/#does-my-use-violate-the-noncommercial-clause-of-the-licenses) explains it a bit more, as pasted below. But perhaps the best thing is to just drop an email to the originator and ask. Probably you'll get an email back saying it's fine; and who knows, maybe you'll make a new friend, too. I've been on both ends of exchanges like that, and it's generally worked just fine.

Does my use violate the NonCommercial clause of the licenses?

CC's NonCommercial (NC) licenses prohibit uses that are "primarily intended for or directed toward commercial advantage or monetary compensation." This is intended to capture the intention of the NC-using community without placing detailed restrictions that are either too broad or too narrow. Please note that CC's definition does not turn on the type of user: if you are a nonprofit or charitable organization, your use of an NC-licensed work could still run afoul of the NC restriction, and if you are a for-profit entity, your use of an NC-licensed work does not necessarily mean you have violated the term. Whether a use is commercial will depend on the specifics of the situation and the intentions of the user.

In CC's experience, it is usually relatively easy to determine whether a use is permitted, and known conflicts are relatively few considering the popularity of the NC licenses. However, there will always be uses that are challenging to categorize as commercial or noncommercial. CC cannot advise you on what is and is not commercial use. If you are unsure, you should either contact the rights holder for clarification, or search for works that permit commercial uses.

CC has a brief guide to interpretation of the NC license that goes into more detail about the meaning of the NC license and some key points to pay attention to. Additionally, in 2008, Creative Commons published results from a survey on meanings of commercial and noncommercial use generally. Note that the results of the study are not intended to serve as CC's official interpretation of what is and is not commercial use under our licenses, and the results should not be relied upon as such.

I've informed myself a bit about this and found out the following:

It is good that you state the Name/Website or any Reference about original creator Creative Commons absolutely requires this, even if you don't charge anything for your prints. So, whether you are trying selling your print or not, you should still always do this.

For further information on this, you should probably check out the official page for this, https://creativecommons.org/licenses/by-nc-sa/3.0/

I hope this helps, Max

I am Not a Lawyer, the stack does not give legal advice, consult a licensing lawyer and the maker to check your use is within the licensing agreeming or make a seperate one

The license CreativeCommons specifies BY-NC-SA as:

The Non Commercial clause explained in the FAQ says:

CC's NonCommercial (NC) licenses prohibit uses that are "primarily intended for or directed toward commercial advantage or monetary compensation." [...] Whether a use is commercial will depend on the specifics of the situation and the intentions of the user.

[...] If you are unsure, you should either contact the rights holder for clarification, or search for works that permit commercial uses.

It also provides a CC-Wiki entry what NC is meant to be (pretty much the same as the FAQ), and a survey on it.

Ok, let's look at the NC part of the CC... When is something breaking the NC license? As soon as it is "primarily intended toward monetary gain" it is commercial (short version), and any commercial use is prhibited. What is this? well, let's read the report...

Specifically excluded from the prohibition against noncommercial use in the NC licenses is the exchange of a CC-licensed work for any other copyrighted work, whether by means of peer-to-peer digital file-sharing or otherwise, provided no monetary compensation is involved.p.17

When asked to share their understandings of noncommercial use, no participant could provide a definition of noncommercial use that worked for everyone in their particular group, although there was much agreement on elements of many of the definitions. Through discussion, it emerged that creators take a variety of factors into account when determining what constitutes noncommercial use. These factors are often considered on a case-by-case basis[...]p.30

However, participants across communities were able to articulate a list of factors they generally agreed as a group were relevant to creators’ understanding of whether a use of a work is commercial or noncommercial.p.31

Of particular interest are these paragraphs:

Creators in the groups recognized that they consider some factors more important than others, and they also weigh the factors differently. Some consider certain factors to be “gatekeeping” questions, the answer to which settles the matter. Some creators consider a use commercial if there is any advertising in connection with it, for example. Others consider certain factors to be questions of degree. For example, some creators consider recovery of costs to distribute a work a noncommercial use, but not if salaries or other overhead are calculated as part of cost recovery. Rather than constituting a simple checklist, for many creators the factors exist within a matrix in which the type of use (for example, promotional or advertising use) and the context or community-based nature of the use (for example, charitable use, or use in a public school) are important vectors. In sum, the decision-making process is not clear-cut.p.32

In the quantitative surveys for both Phase 2 (creators) and Phase 3 (users), the first mention of “noncommercial use” appears in an open-ended question asking respondents how they would define the difference between a commercial use and a noncommercial use of a work, in their own words and without consulting other sources. Creators and users provided an answer in the same ratio – approximately 7 in 10 from each group.p.49 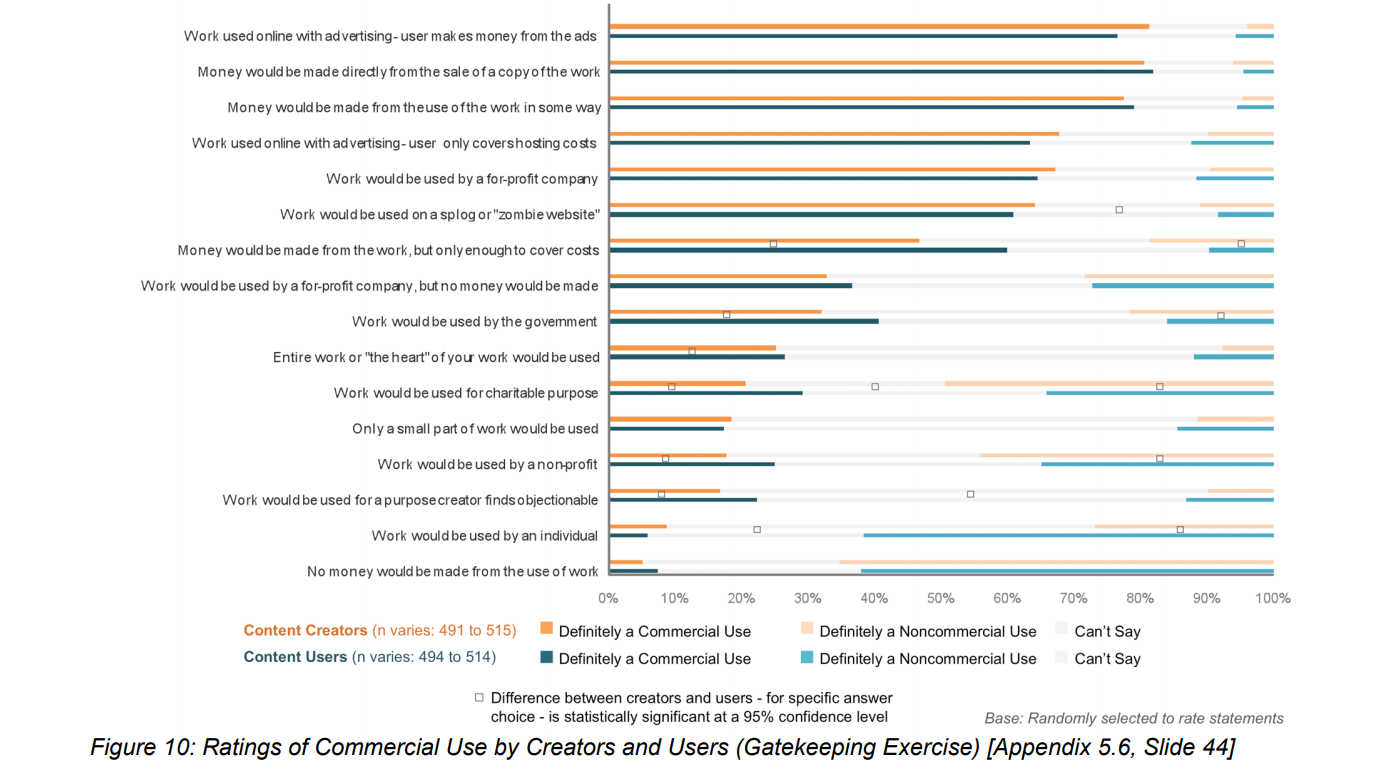 The figure below provides a visual summary of the anchor point exercise measuring responses to uses that make money. 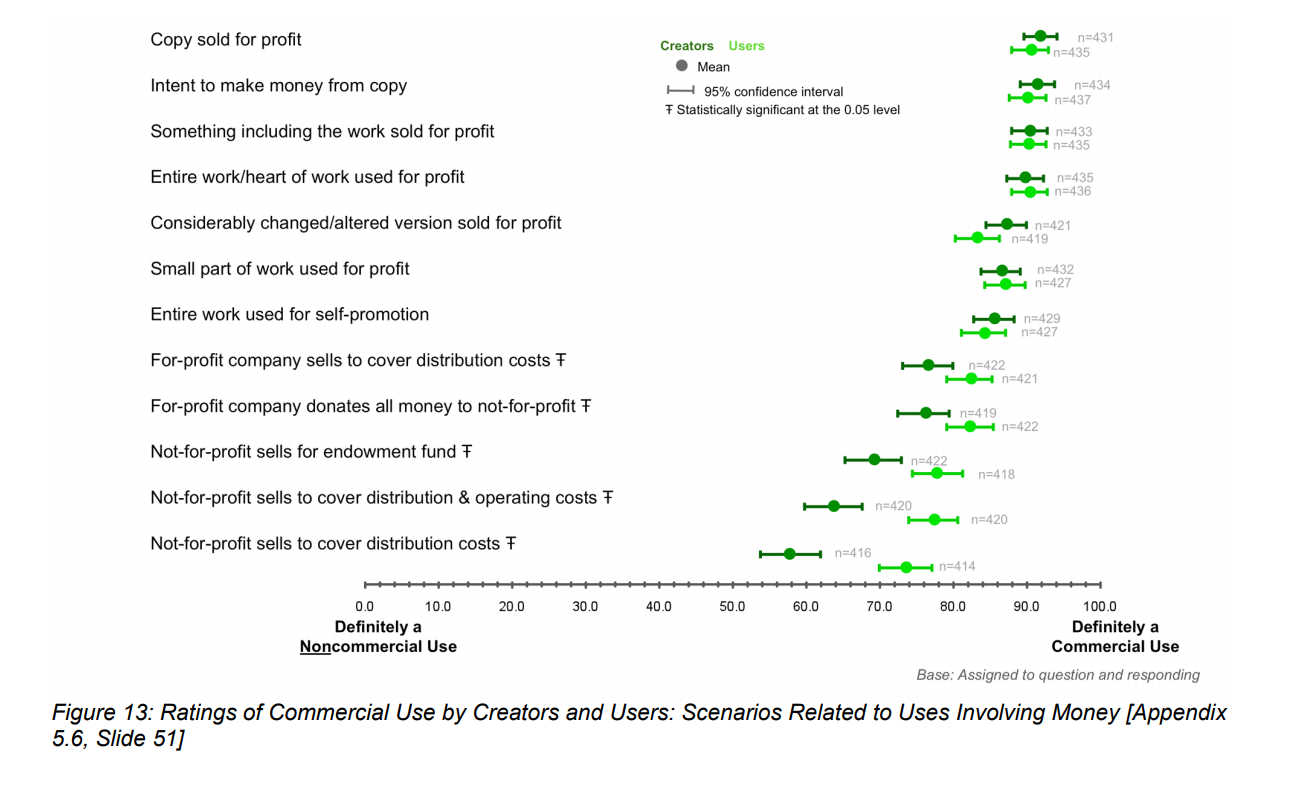 Contakt the maker that designed the part what is OK with them. But be warned: The broad idea the report gives is that around 3 of 4 of the makers and 4 of 5 users deem a "For Profit-Company selling [a thing] to cover distribution costs" as breaking the NC clause, as they deem it commercial use

According to Weinberg, 2013, artistic works are copyrightable: if you're printing an action figure or such a useless pretty piece of art, it's protected by copyright.

For utilitarian things, the copyrightable portion must be severable: if you're printing a video game controller with an artistic design drawn upon its case—not an artistic shape, but a design that could be lifted from the surface and applied as a separate artistic display—then that design is protected, and the controller that happens to be an aesthetically-pleasing shape is not (i.e. you could wipe away the design details and have the blunt shape of the thing and that would not be protected).

Purely-utilitarian things are not copyrightable. If you're printing a lamp or a cup holder or whatnot, there are no rights to extend over that.

That actually creates some odd situations, e.g. CC-BY doesn't apply, either. You can't strip the author's name off the file and pass it off as your own, but you don't have to credit them for the physical object. It is, however, potentially asinine to do that. Even that can be a judgment call: it's likely socially-acceptable to print e.g. an ABS gear for a particular machine that strips its ABS gears and sell a repair kit without crediting whoever posted it on Thingaverse; but if somebody made a more unique object, such as a fancy planter for house plants, it might not be copyrightable as an object, but it's certainly not a copy of a gear that goes into a machine and is instead a unique creation of the user who created it.

Not the answer you're looking for? Browse other questions tagged legal or ask your own question.

1
Can I design or remix a model in SketchUp Make and legally share it via Thingiverse, MyMiniFactory or similar?
0
Can I sell a handpainted large scale 3D model of a copyrighted 2D concept art?