So, the wife got me a Creality Ender-3 Pro 3d Printer for Christmas.

Assembly was easy, axis movements are all solid... when I go to print the test-dog.gcode file provided with the machine, it comes out looking... flat.

Not kind of flat. TOTALLY flat.

The Z-Axis motor works - I can move it with the machine's control panel - and it moves on it's own for repositioning of the head for printing purposes, but it doesn't seem to be moving 'up' for each new layer. Layer height is set for 0.1 mm, nozzle is .4 mm. No settings changed in the G-code, or on the machine (and I did a "reset to failsafe" before attempting to print anything).

I'm relatively new to additive manufacturing, can someone help out here? 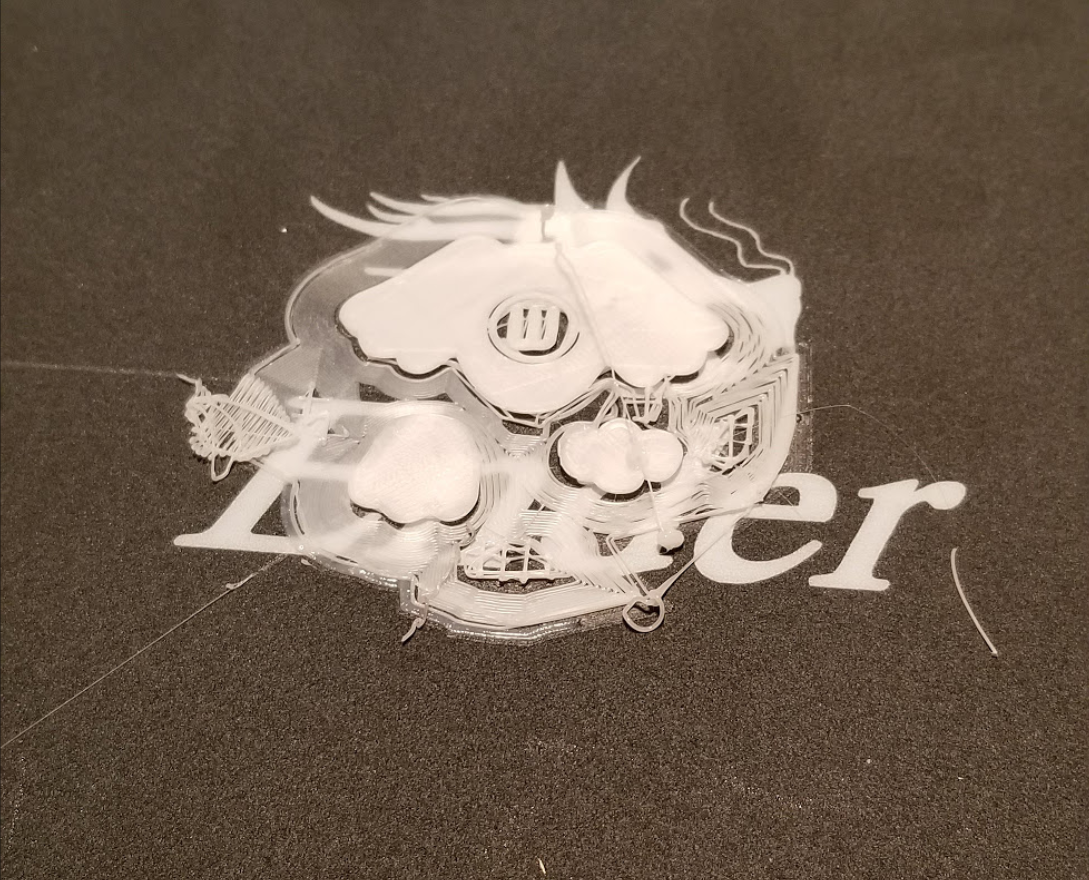 It turned out that there's something wrong with the G-code file that came with my printer.

I downloaded a calibration cube from Thingiverse and printed it - while it wasn't 100%, it did print viable. Now I need to get into details as to quality, and I suspect that too will be a factor for the G-code used in the printer. I'm looking at "Ultimaker Cura" to figure out the changes in G-code based on option changes.

If all the physical side is known to be OK: re-slice your object, you might have faulty g-code.

I had the same problem on an Ender 3. Totally bewildering, because G-code commands G0 & G1 moved Z as expected, as did Pronterface commands, but Z did not advance during printing.

It turned out to be binding in the Z-axis lead screw caused by installing a BondTech style extruder. Previously, it had caused no problems but reinstallation saw it interfering with the screw. A quick workout on the Dremel created sufficient clearance.

The clear conclusion is that during printing power to the Z-motor decreases for whatever reason.

Check your machine's alignment. The Z screw should turn easily by hand, the nylon wheels of the X gantry the same. The bracket mounting the extruder and lead screw is well known to be non-square. Check by releasing the lead screw from motor coupling and seeing where its 'natural' position is vs the coupling. If it won't fall close to the coupling naturally that could be the cause.

Not the answer you're looking for? Browse other questions tagged print-quality z-axis creality-ender-3 troubleshooting or ask your own question.

5
Z-axis endstop not functioning after Marlin Firmware installation
1
Odd dotting when printing a line
3
Visible lines along Y-axis on Ender 3 Pro
2
Ender 3 X Axis stops moving mid print at random times, only makes Y movements after
4
Ender 3 Pro will not auto home correctly after mainboard & BLTouch upgrades
0
BLTouch not levelling correctly (it does seem to work, just not accurately enough)
4
Creality Ender 3 Pro - Z travel issue with TH3D firmware
1
Big permanent layer shifts on X-axis, looks like something is holding the stepper motor but its not