Under-extrusion after a certain amount of successful layers?

My CR-10 is starting prints, BUT then makes weird spiral pattern, layers go up vertically with large gaps. Hollow infill. 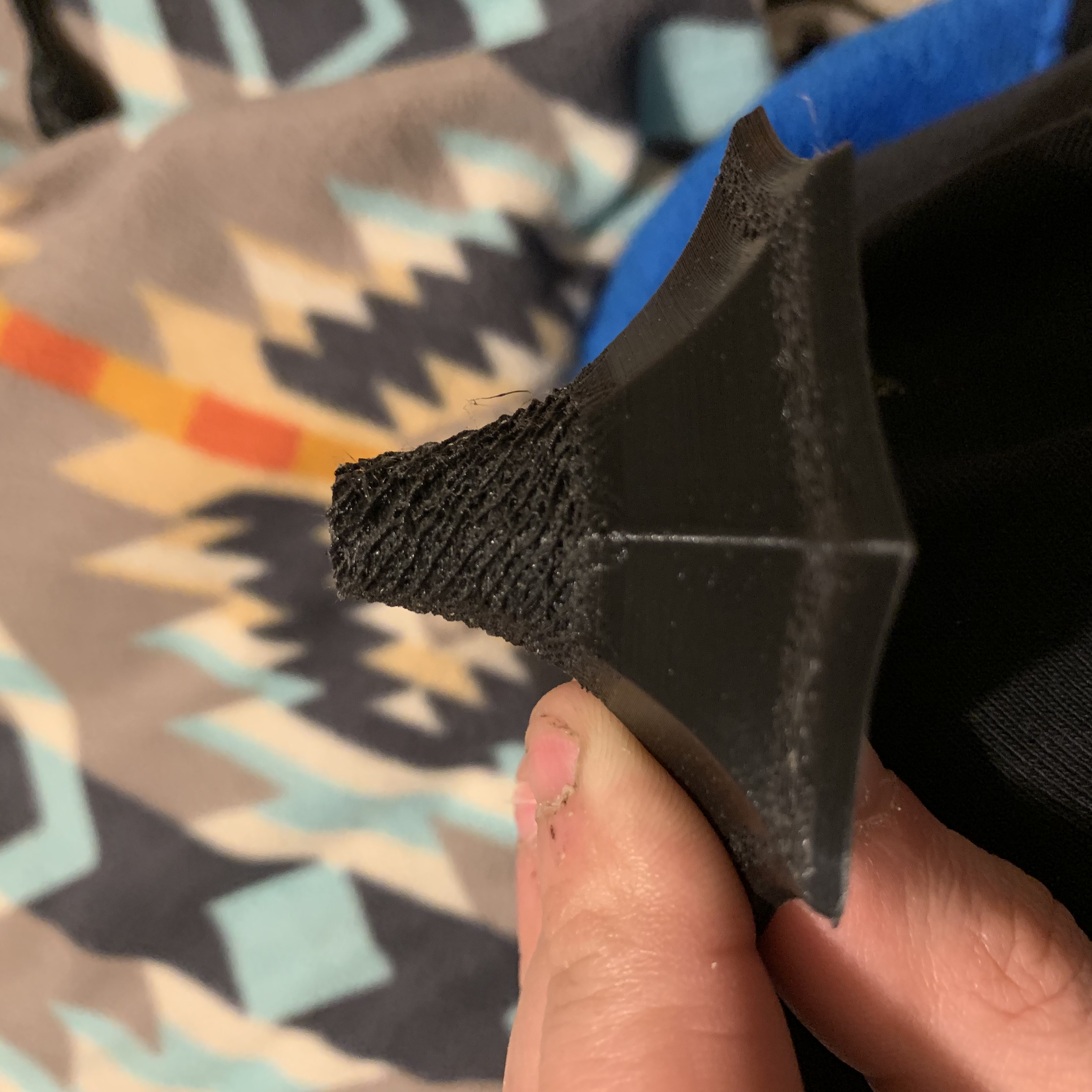 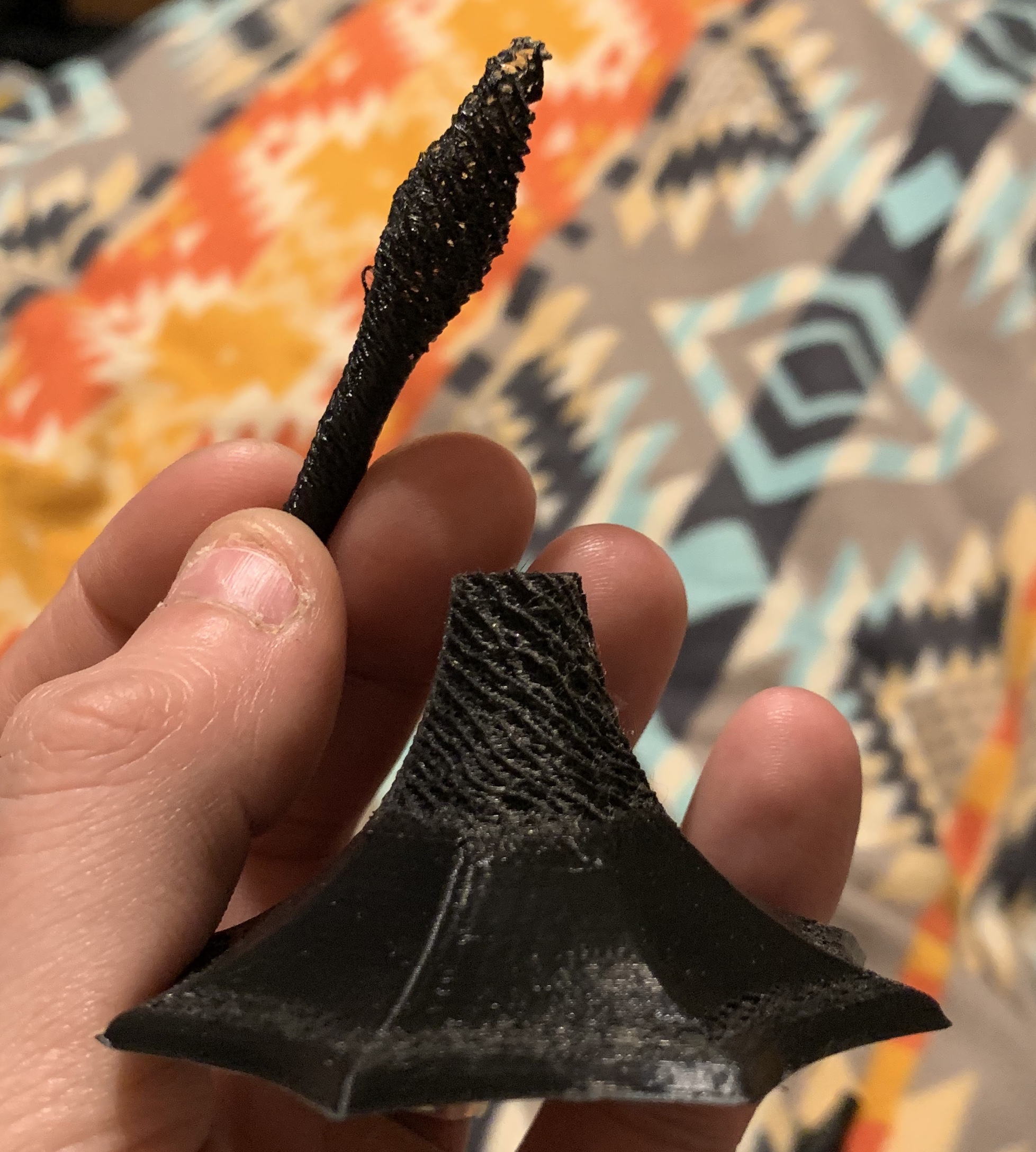 I don’t know if it’s: - My Slicing skills - original files - the printer itself Long explanation. Questions at the end. I’ve had beautiful normal prints. Then I’ve had these abnormal spiral layer prints with infill issues and spaghetti monsters (the images don’t show but, where the prints pictured end, is not the full print, it did the weird spiral then just stopped layering altogether). I’m semi-new to printing and don’t have too much of a tech background apart from average use. Been researching a couple months, I’ve only been printing for about a week. I’ve had an amazing couple prints. Baby groot was flawless, barely noticeable layers. The test print (a rather thick disk with deep grid marks and a puppy on top) that came with the printer was the same smooth flawless, it wasn’t my first print though. So the behavior seems erratic. The two prints pictured had several successful print in between them.

The elder wand file was in several tutorials and was printed successfully. Its in two parts. The first part, which is way shorter and thicker printed Amazingly. The second part pictured was double the height+ and 1/4 the thickness. I even printed it successfully once before going horizontally and flat against the bed. BUT I had to run the print three times because the filament would not stick to the glass. It was just being dragged along behind the nozzle. But I was observing so I ended the print before it went too far. All I did to change this was add a brim and supports. Which gave a “successful print” except the fact that one of the knobs has a flat spot and the support remnants were very noticeable. Resolution was terrible too. Hence why I decided to try printing it vertically.

The bigger print pictured is the base of a hufflepuff horecrux cup, the first time I printed it was with cura slicer, it came out beautifully but the stem snapped right under the base of the cup part st some point, and the left handle had some wierd stringing issues, like 7 pure strands of filament hanging out one corner, and the print failed s fee layers from top. However the file description only had one previous make listed and the thing with the top of the handle and print failed about the same with that persons print.

Sorry for the long post. I’d just really appreciate any help, and I wanted to give all the details.

This is partial answer and comment as it was too big to fit the comment section, it will be a proper answer once the question is updated by the OP.

What you call a weird spiral pattern is the result of under-extrusion. When there is under-extrusion, the resulting print is sparsely filled. The reason for this under-extrusion is most probably partial clogging of the nozzle, or an issue with the extruder itself. One explanation could be that you are suffering from heat creep, but the information you provide is not enough to explain this or any other solution further in detail. Clogging can e.g. be caused by retraction settings and/or temperature settings, without your settings it is a guess what this is actually causing this.

Looking at the print deteriorate the higher the Z becomes this is most probably a heat creep issue, so you print too hot with too large retraction settings.

This intermittent underextrusion can be caused by a broken part in the extruder on the CR-10 / Ender 3. Check if the plastic mount that holds the idler wheel in place is torn. Depending on the height and the resulting varying tension from the filament the idler wheel gets in and out of alignment.

While uncommon, this issue could be caused by having no minimum layer time set. This could lead to printing on a still very hot surface, which in turn ripples and moves, creating a little wave pattern. The wave pattern then can grow into this diagonal pattern.

You might manage to reduce the issue by setting a minimum layer time of 10 to 15 seconds.

Using a CR-10S which printed fine for about 6 months (PLA, 200/58°C), then similar problems started: Interestingly, the height of the "problem zone" appeared to be related to the melting point of the PLA used: lower melting point = problems appear at a lower height. Suspecting heat creep, I swapped both hot-end fans... but things got only marginally better.

As I could rule out extruder issues (metal extruder, new gear), the bowden tube (replaced, upgraded couplings), I looked at the hotend again. There was clearly not enough "melting power" (25mm/sec would print ok, but not 50mm/sec). I then checked the INSIDE temperature of the heater block (butting a thermocouple right behind the nozzle, with the bowden tube removed)... turns out that 200°C (set in Cura and shown on the display) are more like 180°C! In order to get near 200°C, I had to set 220°C in the slicer - and printing DID improve (underextrusions greatly reduced).

I'm still not happy with the situation, b/c deviations like this usually don't come out of the blue... it's not the first time that I read about CR10/CR10S hotend temperatures not being read correctly, so I suspect that this might be the reason for many "mysteriously" unter-extruding CR10s... (BTW: my temp values don't fluctuate and I have the correct capacitor on the mainboard).

Not the answer you're looking for? Browse other questions tagged print-quality adhesion layer-height creality-cr-10 print-failure .