Probably the question sounds a little strange; however, I am looking for a filament which is breakable and not so steady and reliable as PLA. I want to print parts similar to the following gears for instance (They are from Lego, a children's toy). 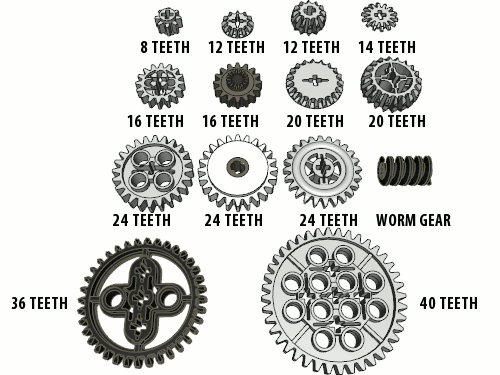 They should break after some time or in any way become unusable after an accidental period (1 minute to several days) of use. Yes, you read right: I want to print parts that are frangible and probably will break! I plan to use Ultimaker 3 as 3D printer. So I'm looking for a suitable filament. Maybe I can merge two types of filament?

Could Ultimaker's TPU filament (https://ultimaker.com/en/products/materials/tpu-95a) be useful for my purpose? Or can anybody recommend me another filament that can be useful for my intended use? The primary purpose is that the printed part is not stable enough to serve its original purpose for longer than a foreseeable time (1 minute to several days). I appreciate your advice and ideas.

Note: I don't want to sell them; I want to use them for my private project. So please no legal issues. They are not helpful for my question. I don't ask for legal advice.

I won't even ask why you need this and I assume you've done your homework about the issues. 3D printed gears are notorious for failing even when designed well, so the idea in general should be pretty doable.

TPU would be a terrible choice for a number of reasons. It's flexible which would make it a bad gear to begin with, but it is also very very tough. So it may last quite a long time, but perform very poorly. You specifically mention not using PLA, but I doubt you'll find a material that suites what you are looking for, more likely the print settings should be changed.

My personal recommendation would be to use a good material such as PETG, ABS or PLA and deliberately under-design it. This way when it is overloaded, the part will fail. Be sure to consider how you want the part to fail, this will decide which material you should. As for how to under-design it: This would take a bit of testing. 3D printers create an enormous range of material properties due to infill, layer height, etc. For a starting point, change the infill level down until you get the desired results.

Those parts look pretty thin to begin with, if the infill is not an option, try to reduce your wall thickness and thickness of top and bottom layers. One pass thick walls with no infill will be awfully weak and flexible. That flex should be enough to get you what you need. Eventually you can get it down to just a shell of a part with 0.2 or 0.1 mm thickness all around.

PLA will shatter, possibly resulting in further failure if caught in other gears. The small parts may cause an issue though when it fails.

ABS will deform and probably not shatter, but it is difficult to print with. I would not recommend this.

PETG is on of my favorite materials - it is relatively easy to print with, very strong and bends instead of shattering on failure. This may be a good material to use.

deliberate/planned obsolescence is the term you look for

If you design parts that break after some time, you plan their obsolescence. That you do by a deliberate choice of material and working conditions. Designing a part that will break after a certain time can be done by choosing the correct stresses that will make your chosen material break.

In a gear that is meant to break at certain stress, one can weaken the teeth or the sprues, so that normal operation stresses will very likely break the safety margin and destroy the gear.

is it a material choice?

Any material is suitable to make a planned break, as long as the design is suitable. Performing a stress analysis of your part will tell you where to weaken it to enforce it will break - if the part was solid. As printed parts in FDM aren't solid, take the result with salt - it will tell where but not when it fails. Do the experiment for actual numbers.

is it a print setting thing?

Besides deliberately under-engineering some part of the gear, a usually perfectly fine gear would lose a lot of strength by deliberately reducing how massive it is: the stability of a print is affected by the form and amount of the infill just as much as the number of shells. Some random setting examples:

To find the exact breaking point of a setup, one might need to toy with the parameters and experiment. It might be interesting to use no top- or bottom-layers and thus turn to create all the spokes of the gear in the shape of infill and outer shell. Also, some infills are better at withstanding forces than others - for example, Gyroid or Hex infill is rather stable on pressure while spaghetti is quite weak.

Other parameters also can change the infill stability: speeding up the print of the infill compared to the shell and using a thinner line considerably weakens the infill, thus reducing the needed load to break it. This is a somewhat easy parameter to tweak if you want to go for breaking the spokes (see below).

planned obsolescence and how to under-engineer safely

Sometimes, planned destruction is good for safety: a safety valve is supposed to break under overpressure to release the pressure in a safe way.

But planned obsolescence can also be a safety risk: If a toy breaks under normal use, it is a safety hazard for the broken off parts can be swallowed by children. Another factor to look at is where broken off parts end up in the machinery - they might jam other pieces that are not meant to self-destruct and destroy them.

Industrial machinery design usually goes the melting way: Let's take a hand mixer. It contains a gearset that has one drive gear connected to a second gear, so that both mixers spin opposite. Under normal use, these spin pretty fast, creating heat from the friction. In a good design, these two gears are made from metal or a high heat tolerant polymer. But if one plans for having them break, these gears are made from a material that will heat under the friction in such a way, that after a set time (around 5 minutes), the teeth will be sufficiently weakened to deform and grind away, destroying them in the process.

I would actually deliberately under-design the gears for the expected loads and then go for a solid material printed in SLA or SLS from either a resin (which will break with pieces and bits going flying, so a gearbox is mandatory!) or a polyamide (nylon). These parts would match the stress analysis fully.

If FDM is the only option, the material choice depends on the failure mode you opted for:

Gear Design
When designing your gears, keep in mind that gears are rather complicated. I actually advise to take a look on the gross oversimplification of This Old Tony because it allows you to see where you can make teeth break very easily by design!

LEGO is Copyrighted, Patented and Trademarked
Copying Lego designs would be a Trademark Violation, Patent infringement and a copyright violation by using their designs. They protect them.

This metod will be difficult with gears but doable. Print cold and slightly under extruded. This will cause part to fail in layers. You may need to print the part on side to ensure a non functioning gear. Use PLA or PETG. Breaking TPU is next to impossible.

Not the answer you're looking for? Browse other questions tagged filament ultimaker filament-quality filament-choice .

27
What is PLA+? How is it different from PLA?
2
Finding the right material to print RC CAR cover
2
PLA for Dactyl Manuform print | Which material for printing the shell