Sadly, I am not able to "repair" my 3D printer. Every time, I want to print something that takes a bit longer to print, the extrusion stops at some point during the print (the first few layers are great), no under-extrusion whatsoever before that critical point.

I tried printing without any retraction, but failed (I also experimented with flow rate a lot and calculated the perfect percentage etc.)

Everytime a print fails, it is a nightmare to remove the PLA filament from my Bowden tube (because it expanded near the nozzle and is stuck in the Bowden tube). I have to pull with so much force, that I already cut myself several times because I slipped off my pliers.

As I know for sure (I already wasted almost 1kg of PLA for my testing) the problem is heat creep = heat travelling from the heat block to the PLA above because the heat break or fan seem to be broken.

So my question is: "Will it be enough to buy a new cooling fan (as the standard fan doesnt seem to be powerful enough)?"

Or do I need a totally new hotend? (with heatbreak etc.)

Or is it enough to buy a new heating block + heat break? (I don't know if the cooling fan is the problem or the heat break).

To fight heat creep, you must understand why this is happening.

Heat creeps up the hotend assembly as a result of incorrect settings or hardware setup causing the filament to prematurely soften and swell.

It is important to reduce the heat travelling upwards in the first place rather than fighting the result. Too high print temperatures are an obvious culprit, but also print speed and retraction length are important. These need to be dialed in in perfect harmony.

Even when you buy a complete new hotend or parts for the hotend, incorrect settings may lead to the same results. It is known that all-metal hotends (due to the lacking of a thermal barrier PTFE liner in the heat break shielding the filament of excessive heat input) are more susceptible to encounter heat creep and should generally be avoided by less experienced makers.

Whether or not you should buy new parts depends on the current extruder, your ability to fix it (and the willingness to put in more effort to try) and the knowledge to install new parts and find the correct settings for optimal printing. There is no unambiguous answer to this question.

I resorted to google to find a candidate image which might be similar to your hotend. 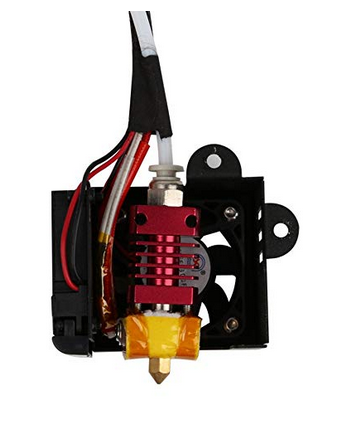 Now, it is safe to assume that a like-for-like replacement will not improve matters significantly. It is also a good assumption that the performance gap which you need to close is small. Presumably you know how much time you need to wait for the creep to manifest itself so are part way along to being able to perform some heat flow calculations.

The mass of the cold-end here is small, and there is maybe next to no additional metal on the cold side (compared with direct drive, where the servo acts as thermal damping).

You ought to be able to perform static testing - a thermocouple thermometer should be cheaper than running a spool of filament, and all you are interested in is the temperature rise at the hot side of the cold end after 'time to fail'. If you can achieve a halfing of this rise, you're on the way to achieving a 4x longer print run (or better). If you test with zero filament flow, you should see a worst-case result since there is no cold material flow into the cold end.

The one obvious improvement to make with the specimen above which I found on Amazon would be to duct the fan, so airflow is forced past the fins. A side benefit will be reduced cooling of the hotend.

A further improvement, if there are any metal parts in the carriage, would be to remove the anodizing and use thermal transfer grease to increase the effective heatsink size (assuming that the fan also provides airflow over this metalwork.

You might find a larger cold end heatsink (more air surface area over the fins), that might be a worthwhile improvement - but it depends on the mechanical constraints of your printer.

If it's a printer stock, no modifications, obviously you don't need to change the hot end, Creality did not release a printer without testing it. At least, no such extreme issues can be expected.

Cooling the hot-end heat sink may be the key. My first step would be to try ducting so the all the air from the fan flows through the fins of the heatsink. To keep it easy and be a quick experiment, use cardboard (or business cards) and tape. Check the controls to be sure the fan is running at full power. You should feel air passing theough the fins. You can not cool it too much.

For cleaning out pla from tubes, nozzles, and hot ends, I use a hot-air heat gun.

There is a different, much simpler possible answer, that I see posted nowhere, and after changing many many things on my setup I have finally figured out....

Clean the built-up dust off your heatsink and fan.

Undo the 2 screws and clean the dust off.

I have a cheap Chinese all-metal CR-10 hotend. I used to have a lot of heat creep, but after I setup my only 30x30 mm fan as a part fan to be 100 % at all times to cool the heat sink and retract 10 cm of filament after finishing the print, the heat creep went away.

You can add this G-code after finishing the print to retract 10 cm of filament:G1 E-100 F1200, so it prevents the filament to cool down and expand inside the heat sink.

Another good way is setting up a fan to be up all the time to cool the heat sink. Since I don't have a heated bed and have a single fan, I've wired my fan to D8 pin (for RAMPS 1.6), then setup Marlin:

This means that your extruder 0 will have a fan connected at D8 pin running 100 % after it hits 50 °C all the time, thus helping with the heat creep issue.

15
Efficient and easy way to thermally insulate the heat block of the hotend?
6
Hotend heating failure too short before limit
6
Installing bowden tube into E3D V6
1
What causes leaking between the heat break and the heat block?
2
How is heat creep characterized?
1
How to identify, use, and replace the Copperhead Bowden coupler?
2
PLA Jamming- is the heat break too hot or too cold?
0
Alunar Prusa i3 hot end replacement options
3
Filament Jamming in Hotend. Why?