I'm struggling with an upgrade I made to my Creality CR-10. I upgraded the extruder to an E3D V6 hotend. The extruder mount and cooling fans are installed and working, however, I'm doing something wrong with installing the bowden tube into the hotend. Inevitably after I print a few layers, the extruder jambs and the issue is always the same: the bowden tube has backed itself out a few tenths of a millimeter, and the filament has mushroomed into the vacant space and hardened so that the filament cannot go forward or backwards.

I've tried several things to fix the issue including:

The only thing that has (partially) worked was when I would ductape and hot-glue the bowden tube into the fitting so it couldn't back out. However, since I'm still tweaking things, I inevitably have to disassemble things and I'm back to square one.

I'm trying to figure out what mistake I am making to keep causing this issue. As an example, originally I used the pneumatic fittings wrong and thought I was supposed to pull the plastic part out to release the tube, rather than simply pushing it in to release the tube. (Needless to say, I wrecked a lot of fittings that way.)

What else might I be doing wrong to keep causing this issue? What are other culprits to this issue happening repeatedly? Are there firmware settings that may help (or be aggravating the issue)?

You may need to secure the pneumatic coupling in the closed position with a small plastic clip (which should be supplied with the hot end). 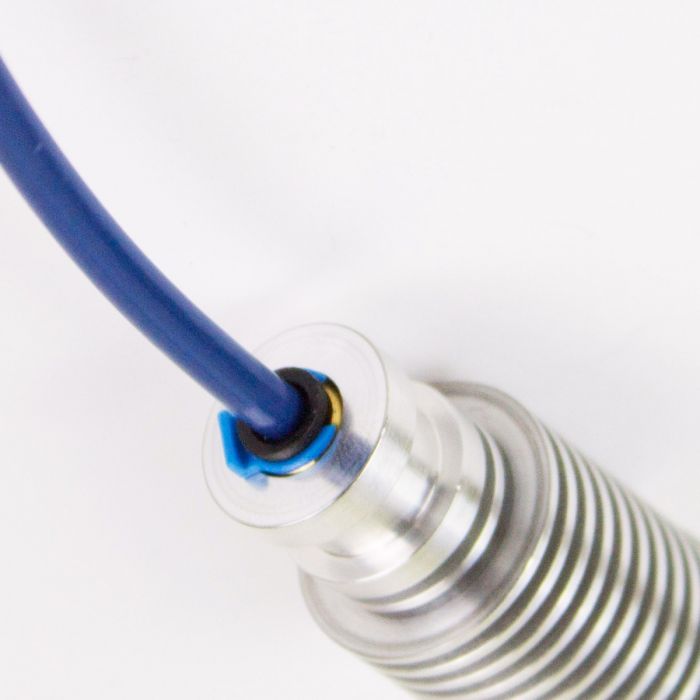 You can print your own, providing that your printer will work for long enough (a paper clip might do the trick):

Some pneumatic couplers are sprung, so that you have to depress the coupling ring in order to release the tubing. In this case, no clip is usually required. Other pneumatic couplers (such as the one on an E3D V6) are unsprung. This makes it easier to secure and release the tube using the supplied clip. The disadvantage is that you may lose the clip. Sprung couplers sometimes lose their springiness, in which case a clip can be used to secure them in the closed position

It's "swings and roundabouts", really. You can to choose between the awkwardness of sprung couplers, or the risk of losing a clip. Either way, print some spare clips. You may need them one day.

This sounds more like a problem with heat creep. When you installed the new hotend, did you reuse the old cooling solution? You might need more heatblock insulation and / or cooling power.

Not the answer you're looking for? Browse other questions tagged extruder bowden e3d-v6 or ask your own question.

8
Extruder is running backwards?
2
Smooth transition between a PTFE tube and the back of a push-fit coupler
4
E3D V6 underextruding always?
3
Can I use Bowden hotend instead of Wade for a direct extrusion?
8
How do I calibrate the extruder of my printer?
4
Ender 5: Bowden tube shifts in/out of extruder during retractions
6
How does slipping Bowden tube affect retraction or does it at all?
1
Adventurer 3 3D Printer doesn't extrude correctly
1
Extruder always clogs up almost immediately after cleaning