Printing multiple prints stacked on top of each other

Suppose I want to to print several copies of a large, flat object, such as a hollow frame. If I make an STL file consisting of several copies floating just above each other then my 3D printer's software happily generates supports for the upper objects to sit on, as shown below: 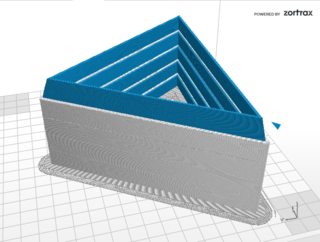 My question is, is this a crazy idea? If it will work it seems it has several advantages. I can print more copies at once than if I tried to fit them next to each other on the platform, and if one of the prints fails the ones below it will still be OK. It doesn't take that much more filament than printing them all separately.

I'll probably try it at some point just to see what happens, but it's not something I've heard of people doing before, so I'm wondering if there's a good reason why it won't work or would otherwise not be a good strategy.

If you can get it to work reliably and with decent quality, it would be a good solution. However, you might find it unreliable and the bottom surfaces of the objects might not turn out very nice (as is usually the case with overhangs that needs support). How well this will work is strongly dependent on the object being printed, and this probably will only work for a very small class of objects.

You don't gain much by doing this, as printing multiples "at once" isn't much faster compared to printing them sequentially (that is, if you have time to check on your printer and reset it between prints).

Whether this is or is not crazy is largely dependent on two factors: the printer that you are using and the objects that you are printing. I would only recommend this strategy if you are using dissolvable support material, because separating the parts with breakaway supports will be extremely difficult. Next, this strategy is desirable, because it saves support material; however, that is only true if all of the profiles of the parts are very similar to each other (ideally the profile of each part should cover the profile of each part above it).

As long as you are using the right printer and printing compatible parts, this is a great strategy. It saves space, time, and support material; moreover, stacking parts may also reduce warping due to thermal expansion (a big problem when printing with ABS), because each part acts like a raft for the part above it.