We have a fairly new Ultimaker 3 Extended.

When printing ABS with the AA0.8 nozzle and the recommended settings (up-to-date CURA) we receive a very poor wall quality that exposes some kind of pores. I've attached an image of those pores.

I already tried to increase the wall thickness or increase the layer height to 0.3 mm. Are there other settings I might be able to tweak to eliminate those pores? 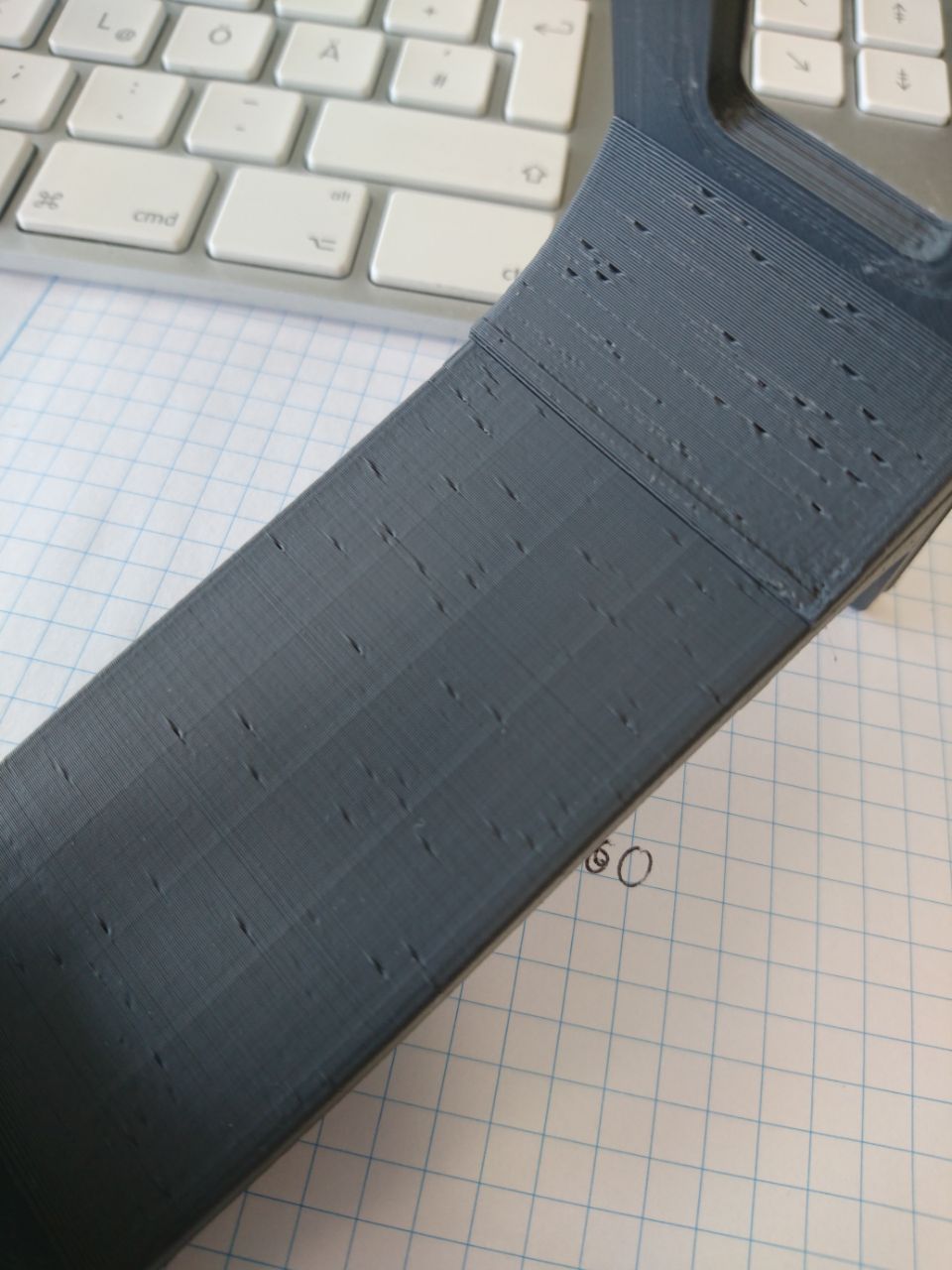 First of all, I agree with the other answer, which suggests slowing the print and increasing the temperature (upvoted). I also see some evidence of de-lamination between layers in the photo, which lends weight to that idea.

But I want to address this:

Perhaps. There's also a chance these gaps are the result of the nozzle as you suggest...

... however, if that's true, it's almost certainly not the nozzle itself. For the nozzle to cause this problem, the z-axis would actually have to descend as the layer tries to adjust upwards.

Instead, I'd look for a clump of material stuck to the nozzle edge, either during a priming phase in the machine beginning g-code or picked up from the first layer where an early part of a brim/raft/skirt may not have completely stuck to the print bed.

This happens commonly with my printer now that the nozzle has aged some, and I tend to watch the printer carefully while it warms up for a new print so I can remove the priming material with a putty knife before it can cause a problem.

While no expert, I'm wondering if you're going the wrong way with tweaking your parameters.

If I'm reading your question correct, you have a fairly large nozzle (it's a 0.8 mm?) and then you're using ABS which requires more heat (230 °C nozzle temp) than say PLA does (typically 190 °C). Along with that you are using a fairly thick print layer of 0.3 mm, where I've normally only used a 0.1 mm layer height. You add all this stuff up and it seems to me the nozzle temps are probably not keeping up with the amount of filament you are trying to extrude, and due to these things, you're seeing the gaps in the print.

My thinking on this to fix your issue is to do a couple of things. You can slow down your print speed to allow the heating element to keep up. Secondly, use a smaller layer height. Both of these things should help, but will increase print times dramatically. You could also go to a smaller print orifice. Lowering the orifice size to 0.4 mm would again, increase print time, but would mean less filament extrusion and the chance for the nozzle temps to keep up with extrusion needs.