New use for extruder port

This is for a school project, and we have replaced the extruder with a laser for cutting material.

We were tasked with converting a 3D printer into LOM 3D printer, the laser is set using the fan port, however we still need two stepper motors to move material from one side of the printer to the other after each layer of material is cut. 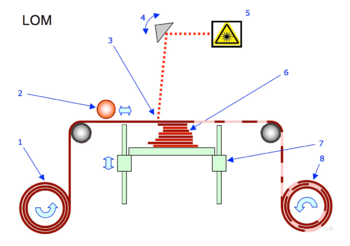 The mother board we are using is WitBot MKS Gen L V1.0 Controller Board Integrated mainboard Compatible Ramps1.4/Mega2560 R3 with A4988 Motor Driver for 3D.

If you are planning to use the printer via GCode entirely, then I don't believe it would be too complicated. For example, Marlin treats the extruder as another axis and uses absolute values for it (if absolute mode is on, of course). Since you want to have two steppers, you would have to connect them in either series or parallel (usually the Z motors are wired in parallel on RAMPS type boards, but many people are going for series since it has some benefits, one of them being that the torque will be much more similar between the two motors). Of course lower the stepper driver current to the minimum before connecting, then adjust it to whatever value you need. I don't think it will work too well if it has to keep the roll tight - in that case, you could be better off by using only one stepper and some kind of force to hold it tight... maybe a small DC motor at low currents?

You can modify your printer firmware and set your own pin assignments for everything, for example in Marlin you have the pins.h file where every pin from the Mega is mapped to different headers and drivers. I don't know if there is any LOM slicer or firmware available, but you could just use GRBL.

With the picture shown, the LOM printer could be almost controlled entirely with a standard printer's hardware and almost no changes to the firmware:

This would create a simple order of operations:

Not the answer you're looking for? Browse other questions tagged extruder stepper motor .

3
Stepper Motor for Prusa i3
3
Z-Axis doesn't work only during printing
1
How to use a 3.8V stepper with Marlin / RAMPS?
0
Why did my extruder motor stopped working?
2
Can I make this extruder work by changing motor?
0
Ender 5 with 8-bit Creality 1.1.4 board- Issue with speed of extruder motor spinning too slow
2
Extruder stops printing before finishing first layer (Ender 3 v2 w/BIQU H2)
1
Stepper motors on the extruder and Z-axis seem to freeze up during any fast movements
3
Ender 3: Extruder Stepper Motor - Hand Turn