How does this Martian habitat 3D printer built for NASA work?

The photo below shows part of the printer. Is this printer just leaving a slurry to dry, or does the mixture somehow catalyze or harden spontaneously? I'm also wondering what the (looks like) twelve black hoses are around the central nozzle. 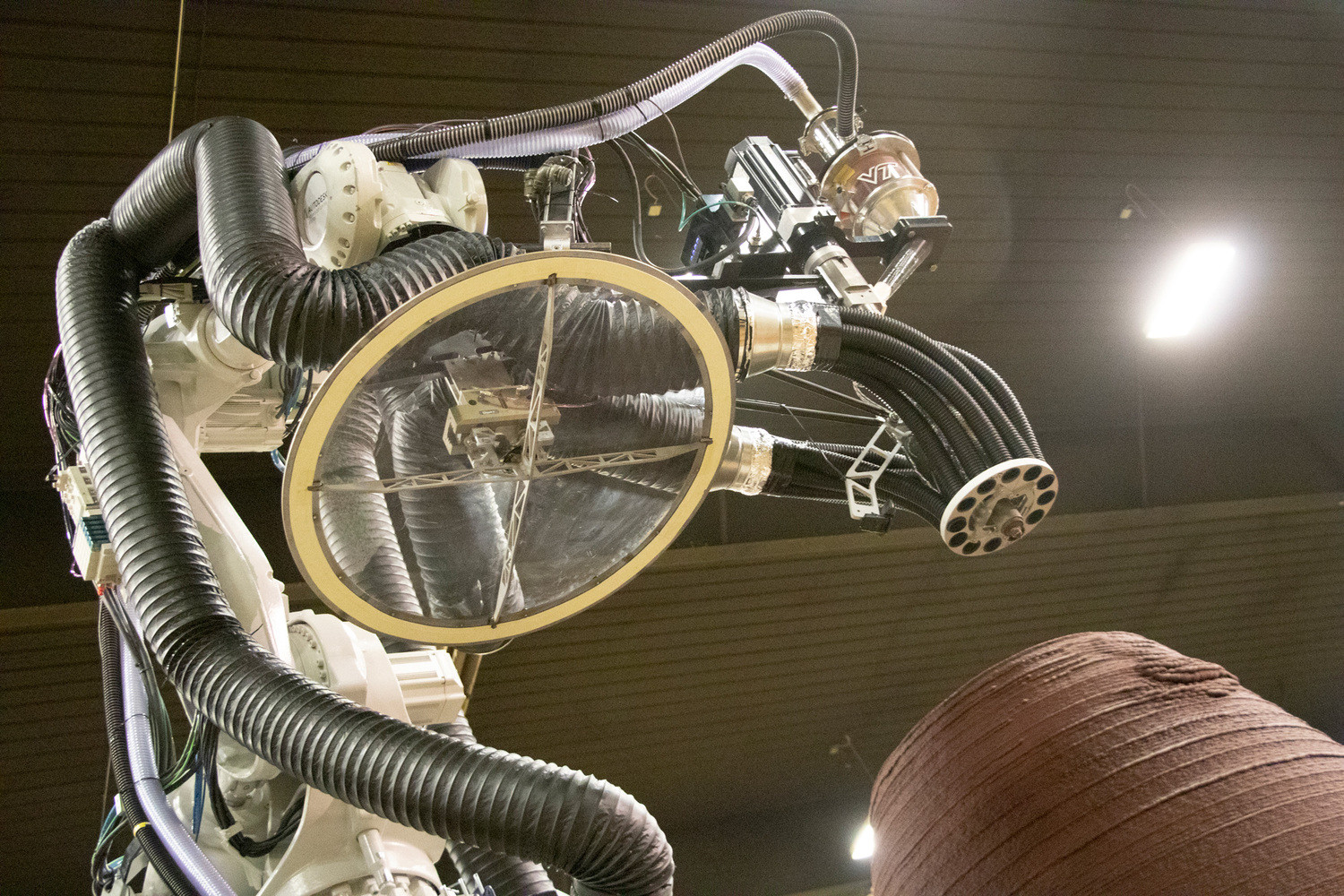 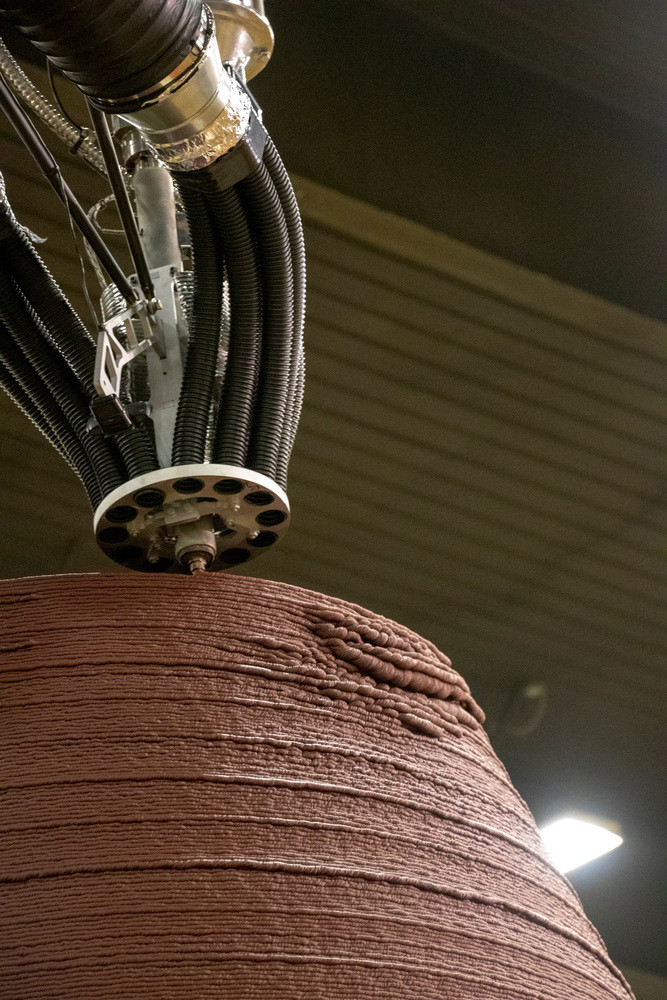 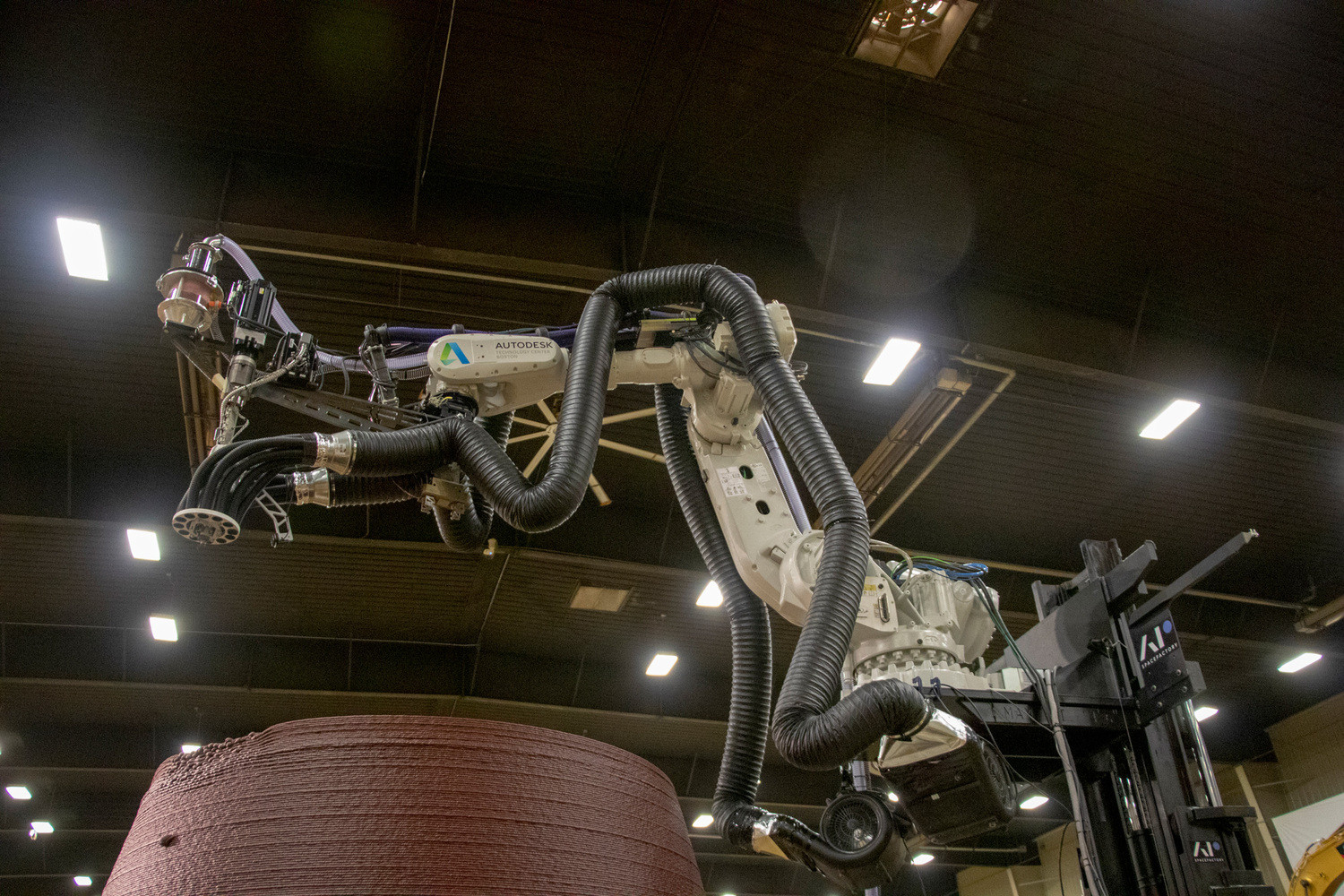 Let's start with the general design look and feel: This printer contains a robotic arm with a toolhead, pretty similar to a welding robot, and probably is controlled with a similar CAM software. 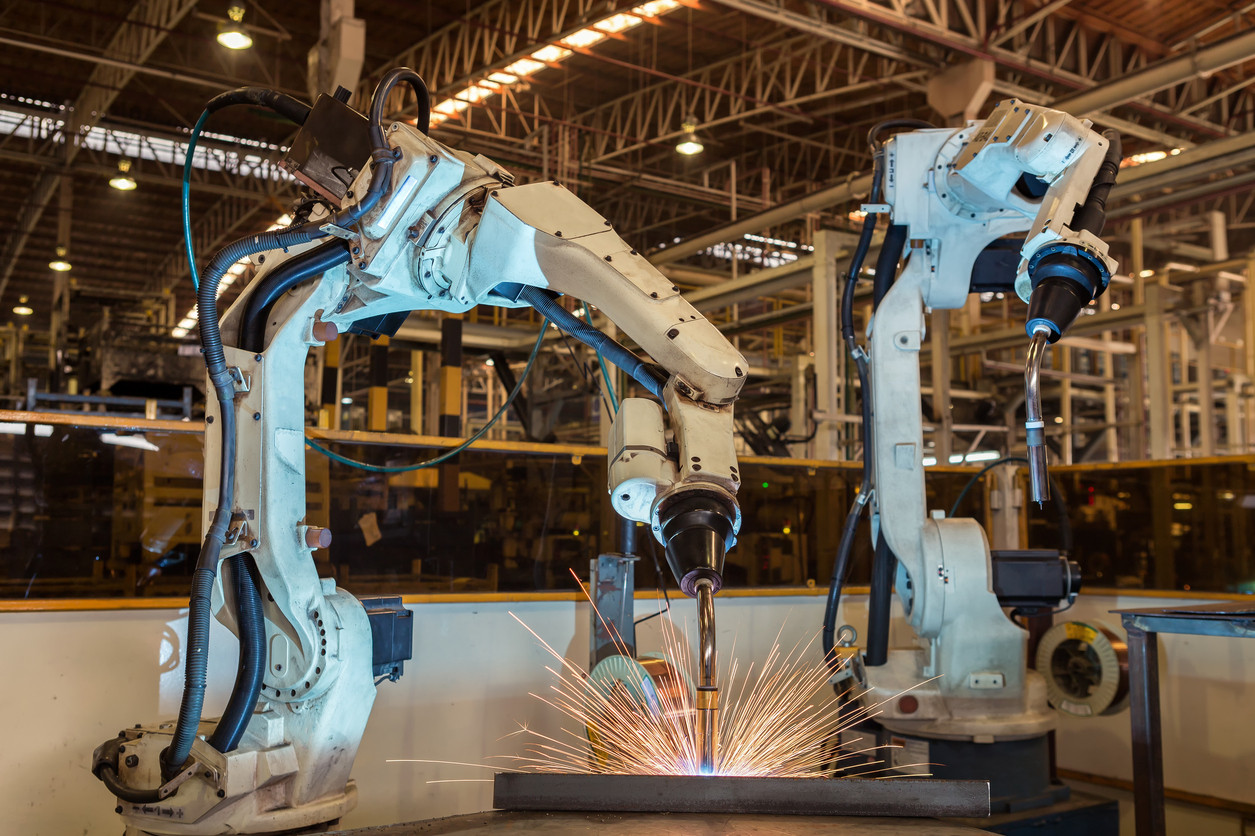 The really interesting part here is the tool head. So let's look at it and try to reverse engineer the use of some parts by how they are placed and what one can see about them, together with the information given by OP.

There's a bundle of 12 black pipes that go from the main body to the print head, ending at the side of some distance disk. To me, these look suspiciously like a system to deliver an airstream, so most likely some sort of cooling system. This is further supported by the huge fans at the base of the machine, pumping air into the flexible pipe.

The first picture shows a silver tank with the label V7 (version 7?) or VT (as in Virginia Tech) or something similar on it. This is connected via a grey hose to the base of the printer. The mounting of it over the extruder hints, that this is a hopper, most likely holding the print material in pelletized or powder form, and that it is fed via the grey hose. From the information given in the question, it might be some sort of PLA (synthesized from cornstarch) or other bioplastic using the Martian dust as a filler material. From here, the print material falls into the central column...

...which goes down through the distance disk into the thick nozzle, so it must be the extruder and heater combo. At its top, there is a large stepper motor in Z orientation, which hints that inside of the matte grey tube is an arbor, pressing down the melting pellets past a heating element into the nozzle below.

The last picture shows proudly "Autodesk" on the side of the printer. Autodesk has an own article about printing in space from August 2018, where Nathan Golino of the NASA owned GMRO states this:

Abrasion has been an issue with the 3D printer we use. It’s very rough on the feed screw and the barrel and nozzle as the material is extruded through the system.

This confirms the general makeup akin to a pellet-style extruder.

Combining a small amount of waste plastic with crushed rock known as regolith can form an additive construction material that’s stronger than concrete. (on a picture caption)

The material we’ve been using in our additive-construction experiments is regolith mixed with waste polymers. You can get polymers in the form of astronaut trash and shipping containers, or you can synthesize polymers. You can use that as a binder for regolith, with a relatively low ratio of polymer to regolith, to make a construction material pretty similar to Portland cement in compression and 20 times stronger in tensile strength.

"Waste polymer" could be anything from ABS to PETG, from ASA over PC to PLA, but it seems that the plastic-to-regolith mix is on the high regolith side. It seems that it behaves more like a plastic than concrete, hardening/solidifying from a molten paste to its hard concrete as it cools.

As an interesting extra tidbit: Golino also states, that the mars-printers are at the moment on level 2 to 3, where 0 is "general concept" and 9 "ready to fly", so in early development.

Further reading into the background of the project - a design competition in 2015 - hinted, that the software for the arm might even be Autodesk PowerMill.

Looking back at the question if that is V7 or VT on the printer's hopper, an article with the same dome printed in OP's question popped up: Virginia Tech had been part of the crews that were taken to the finals of the aforementioned design competition and was part of the finals. They worked with the AI Space Factory team, which came out winning. In a related article, the printer OP showed us can be seen from a different angle and stripped of the cooling pipes and with a different, longer extruder. It tells us a little more about the work distribution of the teams and participants:

Large format vessel printed by AI SpaceFactory in the Autodesk BUILD Space for the construction phase of the competition. The tooling was developed in collaboration with Virginia Tech and Autodesk.

The main company behind it, AI SpaceFactory, showed a different version - the one without cooling pipes - in motion on a YouTube video on April 10th 2019 and the performance of the air-cooled version during the competition finals on May 3rd 2019 (warning, 10 hours of 3D printing galore!) At 9:52:12 we also start to learn what that disk is in picture 1: It is the endcap of the structure which sadly fell through the hole due to navigation issues.

In the following shorter and commented video, we see that the printer also contains some sort of gripper to place the window frames and skylight just as well as the load bearing test performed after the print. Apparently, the material they use is engineered to a point where it can be reused after regrinding it to dust again.

Not the answer you're looking for? Browse other questions tagged print-material part-identification autodesk concrete-printers or ask your own question.

4
Is iron oxide a suitable material for use in SLS/SLM 3d printing?
1
What is the thickest sensible layer height that an Ender 5 will print at?

18
How does one use a heat tower?
4
Can commodity 3D printer extrusion hardware and filament be used for injection molding?
6
What is this called? A tube flange bearing threaded for threaded pushrod
0
Is this the correct motherboard for my Creality CR-10S Pro V2?
0
Looking for this stl design for a cellphone clamp
6
What is the brand of this 3D printer?