I'm currently trying to remesh and simplify some protein structure models (very large) to reduce the file size of the STLs I need to print from.

The raw file before manipulation is ~4.9GB.

I'm currently attempting this on my home PC (16GB Ram, AMD FX9590, dual RX480s - so no slouch by any stretch) but I'm currently watching the progress (which isn't fast), and the RAM usage is worryingly close to 16GB now, with about 40% of the calculation still to go.

I'm using MeshLab's Quadratic Edge Collapse Decimation, to drop down by about 60% since there are a lot of redundance internal vertices etc and the print will already be quite difficult even with a small number of faces.

If my PC ends up not being able to handle this, does anyone know of any good commandline tools for Unix that I could use on one of my servers to handle remeshing and simplification, where I have considerably more ram and CPU power available.

First post on this SE, so apologies if this belongs somewhere different.

Netfabb came up in a number of suggestions that I found. Take a look at 3D Printing Under Arch Linux, which offers a number of solutions for Linux, including:

Taking the section on Netfabb:

netfabb Private will provide you with a fully-loaded tool-box to do all this and much more:

However, it is unclear as to whether there is a cmd line interface. It could be worth reading Problem in Netfabb Command Line execution and in particular the documentation on Automating Netfabb - although this seems to suggest that command line functionality is only available to users with Ultimate subscription and not Basic:

From Reducing Size of STL file to upload to shapeways, this post (#10) states:

You can also decimate the model in Netfabb easily - Right click > Level of Detail > Choose something like 50%... or more or less depending on the level of detail needed.

Although, this isn't available in Basic subscription, or so says post #12.

I also came across this, non-command line option.

From How to Reduce the File Size of .STL and .OBJ 3D Models

For example, you can give the free 3D modeling program Meshmixer a try. Choose the ‘Select’ tool from the menu on the right, then double-click on your model (this will select your entire mesh). Then click on the ‘Edit…’ option and select ‘Reduce’.

You can now reduce the polygon count using several options. The best working choice is to use the percentage tool. It will immediately tell you by how much percent your file size (and polygon count) has been reduced.

Available for Windows and OSX.

From Reducing Size of STL file to upload to shapeways, this post (#8) states:

The meshlab tutorial is exactly what you want to do - the options described help preserve the overall geometry of the model while reducing the poly count. Start with a target of 150,000 polys and work up until the desired detail is retained, bearing in mind the printability I mentioned above.

Also, by way of Quora, How do I reduce the size of an STL file? Does it affect the CAD coordinates for 3D printing?, I also found this Meshmixer tutorial: Easy Guide on How to Repair Your .STL Files. Under the section Problem 4: File Size is too Large for 3D Printing are the following steps:

The last problem that you may stumble upon, particularly as your objects get larger and their complexity increases, is that the resulting .stl file size is too large for your 3D printer or 3D printing service of choice. Third party printing services like i.materialise or Shapeways have upload limits so you may have to change the size of your file (100 MB limit at imaterialise and 64 MB for Shapeways). It’s important to reduce the mesh without sacrificing the quality, which I should say at the outset is best done at the initial export from your CAD software to minimise any distortion. My number one quick tip is to make sure in the export settings that your saving in ‘Binary’ format, not ‘ASCII’ – it’s a significantly more compact file format for .stl’s without losing quality). However if it’s not an option, Meshmixer can be really useful to quickly reduce file size and visualise how this will affect the quality of your surfaces.

For this example I’m going to return to the leaf from Problem 1, which as a .stl file is 30.757 MB – pretty large for such a small design and definitely over the limit for someone’s email if I wanted to send it. So let’s look at how we can get this under 10 MB. 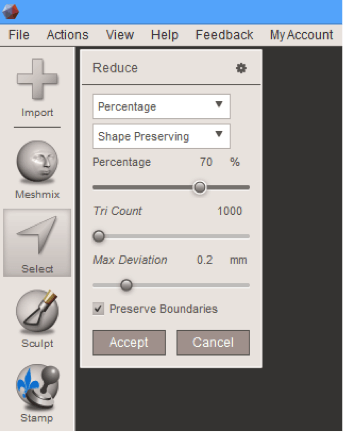 From Reducing Size of STL file to upload to shapeways, this post (#8) states:

Another option is to import the model into Blender, then use the Remesh or Decimate modifiers. Blender can be tough to get into initially but there are plenty of introduction tutorials on YouTube to help.

However, there doesn't appear to be an option for Remesh or Decimate. Although take a look at Is it possible to decimate or remesh via the CLI?:

You can specify a Python script to run, see the Python Options section of the documentation you linked. In this script, you can import the model, add the modifiers, apply them and export the result.

Related - Is it possible to automatically simplify geometry in blender without losing object shape?, which has this comment:

Is there a way to execute this modifier from command line and export the result?

which then leads to Can modifiers be computed and applied from the command line?

You'd have to use bpy.ops.object.modifier_apply, e.g.

For info on how to to run the above, see here.

Seeing as you are already using Meshlab, it might be worth reading Executing meshlab from commandline reduce faces of a mesh iteratively (awesomebytes/reduce_faces.py)

Not the answer you're looking for? Browse other questions tagged print-quality 3d-models software slicing or ask your own question.

10
What are some good FOSS or free tools for editing STL files for 3D Printing?
4
What setting do I need to change to get rid of this gap between the shells and the inside?
5
How to line up (x,y) print area between hardware and software?
1
Thoughts on designing and printing 3D miniature house
6
Combing and Coasting
3
Simplify3D and Davinci mini
6
Relation between layer height and bond strength
2
Printing and slicing big pieces with Elegoo Mars (Pro)
3
Slicers and printers compatibility