I want to know how to make a mold of a 3D design in .stl format.

Suppose I have a 3D partin .stl format (for e.g. a cylinder) and I want to make/design a mold for this object (i.e. the structure through which I could make the cylinder). Is there any way to do so? Are there any tools to do so?

My requirement is as follows: I have an .stl file of a design and need to develop the CAD files for its mold. I will then need to 3D print these molds. I would require to add a hole to pour in liquid (resin based) raw material which hardens with time.

You can also bring the model and a big box into slic3r, align and orient them (enclose the model in the box), and do a subtract modifier, leaving a hollow where the two intersected. You probably want to do this twice, for a top mould and a botom mould. I've done this, but I don't see any instructions online for it. :(

EDIT: Unfortunately, this would be very tedious. It's much easier to use meshmixer or another publicly available program to subtract one stl from another.

In Slic3r, using another stl as a modifier has no effect unless you are also printing that second stl (normally from another head). So you would have to manually remove all the gcode for the second head. Sorry for the bad advice.

In addition to the answer of Davo (which describes a surprising feature of the slicer software I was unaware of), a more generic description would involve the use of a 3D solid model CAD program. You should be aware that a model in STL format is not a solid model, it is a surface model. In order to make a mold you would have to import the STL model into a CAD program (there are a few free ones available like Fusion 360 or FreeCAD or maybe many more that will work also) and make a solid body from the surface model. Next thing is to create a large rectangular block and subtract the positive model from the block. Now a negative lives inside this block so you will need to conveniently cut the block through your negative to create 2 mold parts. Be sure that you divide the block so that you can take out the casting from the mold parts and also add an entry to pour in the liquid casting material and add risers (holes) to de-aerate the cavity. Furthermore, for alignment, you could add pins and holes to the mold parts.

While trying to find a soloution to this problem I came across this forum post, which led me to "Parametric two-part mold generator for OpenSCAD" on Thingiverse.

These scripts can be used to generate either square (with or without rounded corners) or circular two-part molds and are fully parameterized to make it easy to adapt for your application.

Here's an example from Thingiverse. 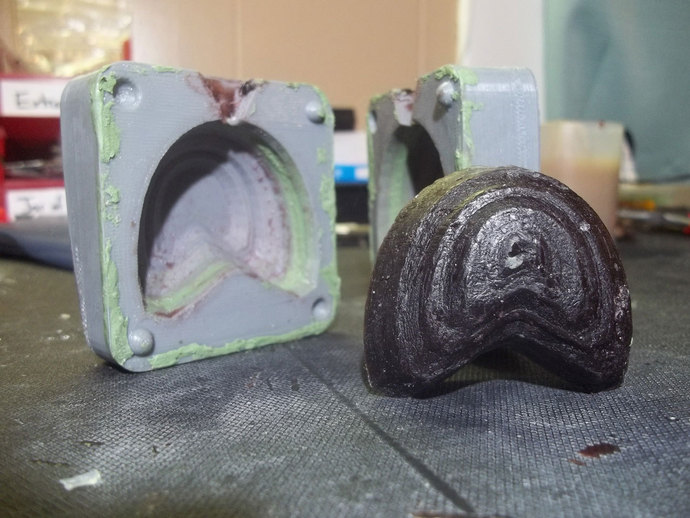 You can find a download, install instructions or source code for OpenSCAD here.

6
Why are the STL files for the Ultrascope telescope at 45 degree angle?
8
What is the easiest way to modify/resize an object inside a STL file?
1
Painting an STL file
3
Convert ball-stick model to STL from the command line
4
Efficient way to create a "mold" of a solid object in Meshmixer?
0
Can model used for 3D printing be later used for mold mass production?