Ask Question
Asked 4 years, 9 months ago
Active 4 years, 7 months ago
Viewed 1k times
7
$\begingroup$
This question already has answers here:
What could be causing my y axis to slip? (12 answers)
Closed 4 years ago.

A few weeks ago a shift between layers in the y-direction (from the front to the back of the printer) of my Makerbot Replicator 2 appeared.

All prints have some small shifts between layers, but if the extruder has to move large distances (e.g. when I print the same object near the front and near the back of the print bed), they can reach up to 2 cm or so. In those cases the extruder seem to move the wrong distance towards the back, resulting in a shifted layer, and then moves about the same distance towards the front. Therefore objects at the front of the bed often are shifted less than at the back. Here's an example of some small shifts in the 3D benchy (printed near the front of the bed). They are particularly obvious in the hull and in the supports of the cabin: 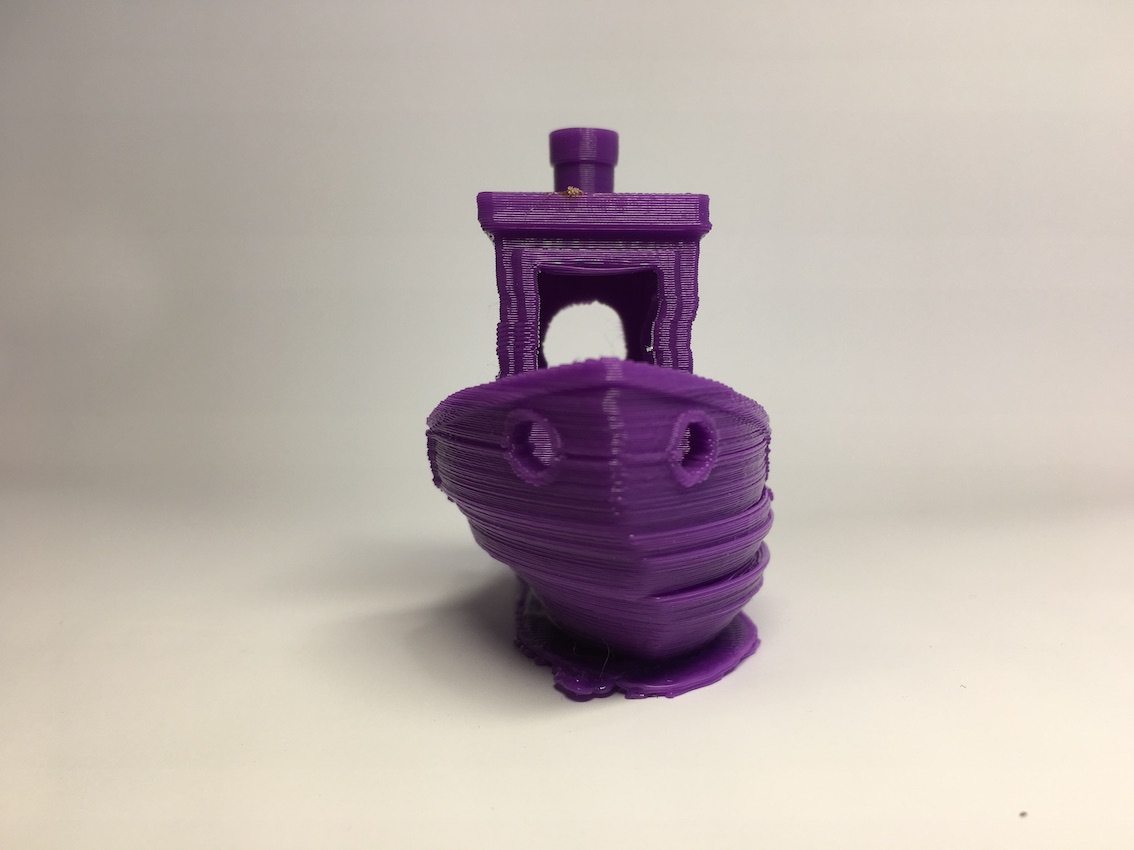 I've tightened the pulleys, lubricated the rods, restored the device to factory settings and made sure the connectors are plugged in properly, but the problems persist. I also have the impression that the locations of the shifted layers are quite reproducible.

From what I understand problems such as these along the x-axis, are generally caused by broken cables, which are pressed upon as the extruder moves. However, the pulley for the y-axis doesn't move, so it seems unlikely that the cable is the cause.

Any help is very much appreciated!

Its not possible to say without seeing the physical machine but I would assume its a mechanical problem. Perhaps the belt or a gear is worn out missing some piece so it slips sometimes. Or the gear its a little loose on its axle. When machine is off you can move the extruder by hand and try to feel if it does so smoothly.

I would not think its electrical but first thing to do is to detach all cables and put them back, because its easy to do. Second is the dismount stepper motor and check that its gear is attached firmly. If there is a bad cable then flexing and pulling it slightly might escalate the problem so that its always broken, which can be a good thing since intermittent problems are so hard to find.

If its the stepper motor driver electronics then a new driver board is needed, last thing to try unless you have two machines and can borrow a part.

I emailed makerbot support once about another problem, I did get some advice that way.

Not the answer you're looking for? Browse other questions tagged print-quality makerbot calibration or ask your own question.

18
What could be causing my y axis to slip?

5
What is causing these artifacts when the extruder moves in one direction?
4
Assisted manual levelling with Marlin
9
Nozzle rubs on previous layers
3
How to edit G-code created in Cura to begin printing at a specified layer height?
2
Calibration improvement of the Prusa i3
1
What kind of problem is this? How does it correct itself?
1
Partially missed / dragged layers
3
Visible lines along Y-axis on Ender 3 Pro
1
What can cause Z height loss in the first few layers?
1
Strange behaviour x and y axis - corner of print