How to Make Use of 3 mm Filaments?

I'm not really sure if I'm asking the right question here, but I just made a noob mistake of buying 3 mm filaments instead of 1.75 mm. I have a Makerbot Replicator 2 which I've been using and so far it is pulling in 1.75 mm quite well.

Is there any way I can still make use the 3 mm filaments, or do I need to use the filaments on different models? If it is the latter, which particular model is able to pull in 3 mm filament well?

This is not a definitive answer (and has turned into a ramble), as I have not yet had to change my filament size.

However, initially, I would have thought that only the hotend and the hotend's nozzle would need to be changed, from one that can handle the 1.75 mm filament to 3 mm. If the extruder is spring loaded, then it should adjust itself to the thicker filament, without a problem. If not, then you may have to do a slight manual adjustment.

However, after doing some further reading, there may be other factors that need to be considered, such as:

It could be worth having a close look at the aperture of your hotend. If, in the unlikely situation, it looks as if the hotend would accept 3 mm (or if you could remove the lining so that it can), you may not need to actually change any hardware, but instead just try tweeking the feedrate in the software, because as your nozzle is less than the width of the filament anyway, then it will be fine for both 1.75 mm and 3 mm. A 3 mm filament would require more heating, and therefore a slower feedrate than a 1.75 mm feedrate. Once the filament has melted, so long as the pressure from the extruder is sufficient, then the molten filament should come out of the nozzle. However, this may be a less than satisafctory method and result in some dubious prints.

There is an interesting thread on the RepRap wiki, 1.75mm Filament vs 3mm Filament, that discusses most of the points above.

It should be noted that the advantages of 3 mm filament has over 1.75 mm are that it is:

As an aside, one interesting point raised in the thread, is that maybe a smaller extruder can be used, for the narrower 1.75 mm filament, thus resulting in a lighter print head. I am not sure how true that is.

This article, Converting a 3D printer from 3mm to 1.75mm, does the reverse of what you want, and comes with a video. It states that, as you have already found, that the hotend needs to be changed:

The printer [Thomas] is changing out to accept 1.75mm is the Lulzbot Mini, one of the most popular printers that would ever need this modification. The only required materials is a new hot end suitable for 1.75mm filament, a 4mm drill, and a few wrenches and allen keys. It would be a smart idea to get a hot end that uses the same thermistor as the old one, but that’s not a deal-breaker as the problem can be fixed in the firmware.

Alternatively, you could leave your printer as it is and use a 3mm to 1.75mm filament converter, which may be a bit of overkill for just one reel of filament1.

To be honest, is it worth the hassle, time and expense of having to modify and re-calibrate your printer (or worst case, change the model of the printer), just for the price of a reel of filament (assuming that you did not bulk purchase a bunch of reels)? It may be better to stick to one filament size (i.e. your original size) for all of your projects, and so resell the reel of 3 mm and stick with the 1.75 mm printer and buy the correct filament2.

See also Can 1.75mm filament be used in a printer that takes 3mm filament?

Well... Usually when one buys a 30 dollar roll of plastic they don't replace a 1k machine..

That said you can change out the extruder. The extruder is what matters. So if you have a Prusa i3, you can go and buy say a e3d hot end that is made for 3mm.

Usually we see 3mm on Bowden printers like the Ultimaker. Everyone else has moved to 1.8.

I would just toss this on craigslist and get the correct plastic.

Late to the party here but I am doing this exact thing. I stupidly bought like a dozen rolls of 3mm filament for about $6 a Kg. I think trying the switch should be fun...but I have 7 printers so its no big deal to tinker on one of them.

What you need to do is modify the extruder. I have done this successfully using the crappy plastic extruders which come with most budget printers. You have to drill out the filament path to fit the 3 mm filament. It does get a little tricky to get the filament to run through nicely.

For the nozzle you can often find 3 mm compatible nozzles. Unfortunately they don't seem to be made for the MK10 hotend. So I simply ordered big ole 1 mm nozzles made for 1.75 mm and I am going to drill out the back for the 2.85 mm (3 mm) filament.

I am excited to see how this all works. You can get some really good deals on 3 mm filament and I suspect that it will actually work much better for things like TPU since it is significantly more rigid due to the increased diameter!

Any modern and decent drive gear (single or dual) is shaped round (concave) to better grip the filament. 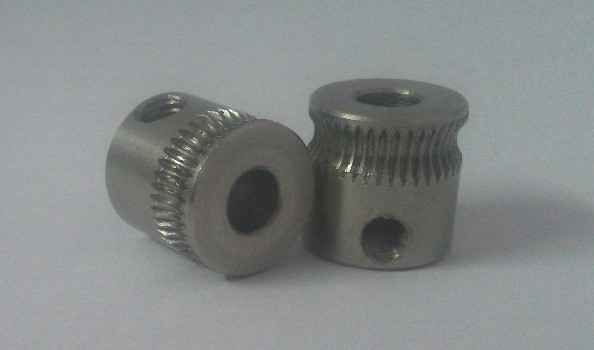 Some are flat, but only the cheapest and least performing ones. 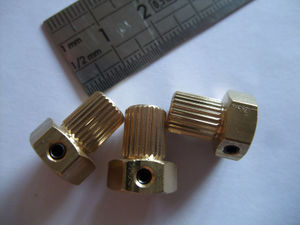 The concave part designed for 1.75 mm filament will be too small to accept 3 mm filament, it will grip it so weakly that it will skip or skid very easily, especially given the increased grip required for 3 mm filament.

Not the answer you're looking for? Browse other questions tagged filament extruder .