I made two updates to my Ender 3 Pro: Silent Mainboard and BLTouch. My printer head is way out of sync now. After I Auto Home, it moves along the X-axis to the left, hits the stop switch & moves back to the right. It does not move at all on the Z-axis and remains 3 - 4" above the bed during and after Auto Homing.

I installed a Creality Ender 3 Pro New Upgrade Motherboard Silent Mainboard V4.2.7 with TMC2225 Driver Marlin 2.0.1 & bootloader pre-installed & then a Creality BLTouch 3D Printer Upgraded Auto Bed Leveling Sensor Kit (the kit that comes from Creality with everything you need to install). I imagine I attempted too many upgrades without verifying the printer worked properly when I did the first upgrade which was the mainboard?

I purchased this Ender 3 Pro back in April 2020. It was working great until I decided to make the upgrades. I assume it came with an 8-bit board but not 100% sure. The new board is 32-bit and not sure what that would negatively impact besides maybe the LCD screen which does work fine after the upgrade.

Here's a video of the printer attempting to Auto Home :


Note: Disregard the unhooked cable under the printer bed in the video.  It is totally disconnected and leftover from the BLTouch install.

Here's how I did the upgrade :

First, I simply replaced the new mainboard, and with the mainboard cover and fan back in place, I powered the printer on. The only thing I did here was to verify that the printer would power up ok. It powered up just fine. The nozzle head did not move I don't think when powered on.

Next, I followed the instructions for the BLTouch that came with the kit. I followed the instructions for the Creality V1 Mainboard 32-bit. Here, I upgraded the firmware via an SD card as suggested. The firmware I upgraded to is the Ender-3 Pro_4.2.7_BLTouch_Marlin2.0.1_V1.1.2_TMC2225.bin. Finally, I powered on the printer with the BLTouch plugged in and new firmware installed. The BLTouch lights up and the touch sensor clicks out and in and few times.

Now, when I hit auto home the nozzle head moves like I described above & remains in a position that I can not attempt to print from. I attempted to follow step #6 Platform adjustment 32-bit, working through the screenshots in the instructions. This did not work.

If helpful, here are the positions of the nozzle head during the two upgrades :

Position after install of BLTouch: remained the same. BLTouch lights up and the sensor tip moved in and out as if it was checking something or verifying it was working.

I'm a bit lost on this issue. Any help will be greatly appreciated!

I'm using 3D4LYF's wiring scheme as I'm using the same set up I believe he is using. The two wires (white & black) on the red connector go in the Z-axis endstop port on the mainboard. For the three wires on the black connector I have: blue=Ground, red=V, yellow=IN that goes in the other 5 pin port on the mainboard. I rearranged the wiring from red/blue/yellow to blue/red/yellow as suggested by 3D4LYF again because I am using the BLTouch Creality Kit. Adding photos of 5-pin port and the connectors: 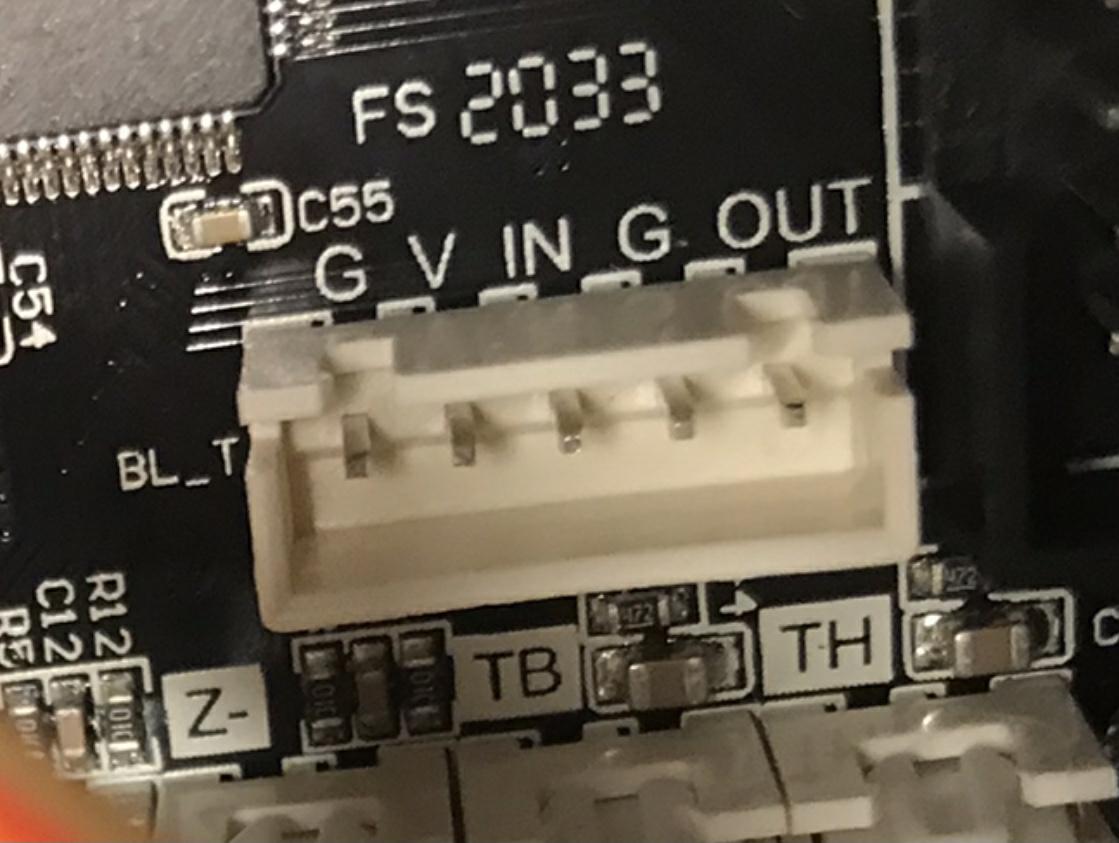 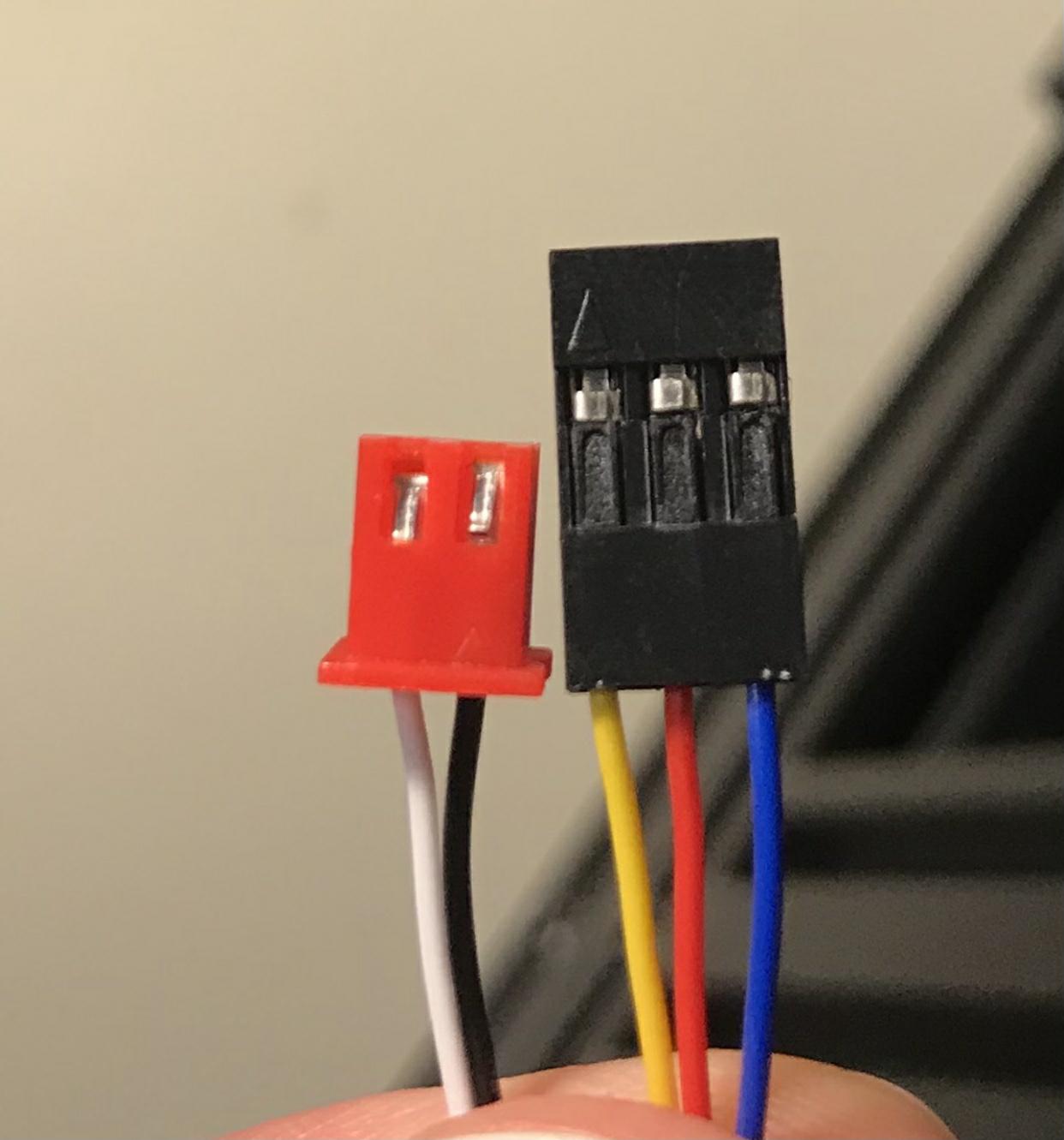 Resolved : connected the white & black wires to the 5 pin output on the board. This solved the homing issue.

I had the same issue and thought I bricked it, so thank you for getting me on the right path! For Ender 3 Pro v4.2.2 motherboard, no Pinboard A, ISP Pinboard, or Burner required! In my case, I had used the provided pins (white housing) that were on the v4.2.2 motherboard itself.

In doing so I had to switch the positions of the red and blue wires in the 3-pin connector (glad I pay attention to those types of things), connected white and black connectors right beside it as the OP has figured out (the connector my BLTouch came with was a little big so I had to cut a wall of the white housing a little; it fits really well), and re-connected the original Z-axis cable (did not need to remove to start with, but still unused as the BLT pretty much replaces it).

Not the answer you're looking for? Browse other questions tagged creality-ender-3 bltouch creality .

1
How can I tell if BLTouch is triggering?
1
Problem with BLTouch on Ender 3 Pro
0
BLTouch not levelling correctly (it does seem to work, just not accurately enough)
2
BLTouch clone will not deploy, stow, or deploy when homing or auto leveling