Problems with stock gear with no screw on Ender 3 pro

I am very new in the 3D printing scene. After a lot of searching for my specific problem (and didn't find any answers, of course) I decided to reach out.

I bought a Creality Ender 3 Pro in November and after a few days of lovely prints I decided to upgrade the printer with a glass bed and "Aluminum Dual Gear Pulley Dual Drive Extruder Kit".

The Problem, as you might expected already, is with the installation of the dual gear extruder. I have watched a dozen of YouTube videos, and all of them have something I don't – a screw in the stock gold gear on the extruder motor.

How can I install the Aluminum Dual Gear Pulley Dual Drive Extruder Kit if I take the gear out? Should I try remove it with force? Please if someone has come across the same situation, that there isn’t a screw In the stock gear on the extruder motor and mange to take it out, please tell me. I'm adding a picture so you understand what I mean.

This is an older Ender 3 Pro, they at one point came with these press-fit gears, these are not intended to be removed which is a poor design decision. I would recommend buying a new motor than going through the hassle of removing it.

I had exactly the same problem with an Ender 3 Pro I bought a couple of weeks ago (Mar 2021) and I was able to remove the gear easily with a small gear/bearing puller... take a look at Amazon and you will find plenty of selection.

The 3-arm puller works better as it's much more stable when pulling the gear (this is the one I have). Both work in the same way; the arms/jaws attache to the bottom of the gear and the tip of the top screw pushes the motor shaft down. 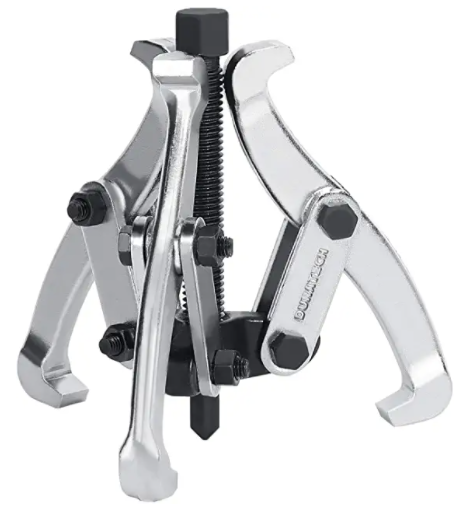 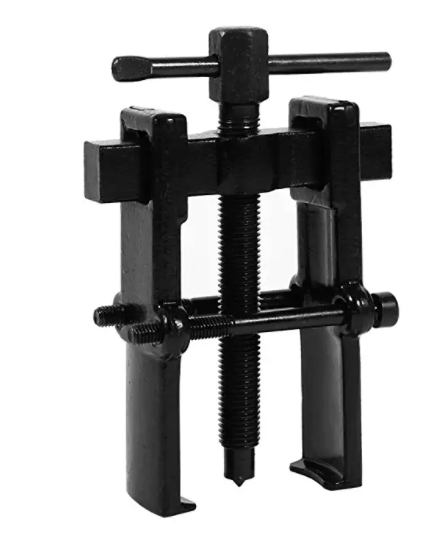 I had the same problem with the pressed on gear. With WD40 and a center punch the gear came off alright.

The next problem was the shaft that is to short and perfectly round. With a small grinder (Dremel) I created a flat spot. I carefully tapped the shaft from the bottom of the motor until it was sticking out enough on the top side. Now it works perfectly with my dual extruder.

Heating it proved futile in my case (I didn't have a blowtorch either), I was able to get the gear off by using a Dremel, I also flattened a small side for the screw.

However, to my extreme frustration, I found out that the actual height of the shaft is not long enough to reach the dual extruder's filament hole and thus had to order another motor.

If you cant see any grub-screw on the extruder gear, it's likely that it has been permanently press-fit onto the motor shaft. It is possible to remove the gear if you have something like a Dremel to cut it off, however, do note that it would be a permanent modification, and that your warranty (if you had any) would be void. If you do go this route, be careful not to Dremel into the shaft of the motor, as this would likely cause the new gear to not fit properly.

If this is a new printer, I would recommend assembling it with the stock extruder assembly first, and ordering a secondary extruder motor without the gear press-fit onto its shaft. Then you could swap them out and not need to worry about damaging the existing motor.

This brass extruder gear is either press fitted (see other answer) or hot crimped onto the shaft. Brass has about twice the thermal expansion rate as stainless steel, so you could heat the gear while cooling the shaft (e.g. stepper upside down with the shaft in water, heating the gear with a small torch lighter, a makeshift aluminium foil shield could be used to protect the stepper base) to get the gear off.

Grinding it off would be easier (or even more easy is to buy a new stepper motor) as when you get the gear off, the shaft is round, so you need to grind a flat spot on the shaft anyway to make sure the dual extruder gear can be screwed on tightly.

I accomplished this by using a pair of open-end wrenches and some heat.

The idea is basically making a lever out of one wrench, and using impact force to release the gear.

I picked up a used Ender 3 Pro, which needed a lot of work. I discovered the same annoyance, the extruder "gear" was press-fitted, and the shaft was too short for the manual add-on wheel. I had a look-alike motor (with the same connector) in my parts bin, so after some effort1, I removed the gear and installed it on the new motor.

Once in place, I have plenty of shaft to mount the handwheel. One additional comment, the connector was the same, but the wiring was not. I had to ohm-out the windings and move a couple pins in the female connector. Runs great now, and all is wheel (pun?).

BTW, I saw someone above using a pair of wrenches to remove the gear. If I understand what they're doing, it's likely to damage the bearings of the motor. Always best to support the shaft and never use the bearings as something to press against. My 2c.

1 I mimicked the effect of a gear puller. Using a small arbor press I supported the gear with a cross bridge made of two short pieces of 1" dia. dowel (as the pillars on each side) and a pair of 1/4 inch square steel rods to span the distance under the gear. one on each side of the motor shaft. The motor is now dangling in free air, supported by the gear. I then pressed down on the end of the motor shaft, eventually the motor broke free and dropped, leaving the gear on top of the rods

Same problem here. I removed it by force using a pliers and a hammer, then drill a spot on the shaft using ikea drill. Everything works fine so far.

I had the same problem. Bought my Ender 3 Pro in July 2021, so not sure if the new or old versions have this problem. I solved the problem slightly differently.

I could not pull out the gear it was too tight, so I put the pliers on top of the gear and then hammered the gear down, not up. Then on top of it I have put the gear that came with the dual drive on top of the old gear and screwed it according to nozzle position. After e-step calibration, to my surprise the whole thing worked and printing fine.

Not the answer you're looking for? Browse other questions tagged creality-ender-3 .

2
Ender 3 under extrusion
4
Ender 3 pro extruder skipping steps, tried multiple things
2
Why would my extruder remove the filament all the way out after prints? [Ender 3 v2]
2
Mid-print issue, extruder issue?
4
Ender 3 V2 Extruder getting hot
3
What reasons are there not to convert Ender 3 to direct drive extrusion?
2
Possible to get G34 auto align and IDEX with Ender 3 Pro and BTT E3 RRF?
0
Ender 3 Pro extruder motor failing constantly
3
Adjust E-step on Ender 3