So I am getting a Creality CR-10S which has a similar print frame with a lot of other printers. Eventually I'm sure I will want to print using flexible materials, but the bowden system is not optimal since you're basically trying to push cooked spaghetti through a tube. I could replace the bowden with a direct drive but that can be expensive (and potentially shave off 15 mm from one of my axes). Not to mention that the print head is now heavier which can affect print speeds and quality.

That's when I thought about moving the extruder gear and motor from the side of my printer to the top. The tube then goes down the Z axis so the flexible filaments are pulled by gravity and controlled by the gear instead of just being pushed by the gear. (Please refer to my wonderful sketch) 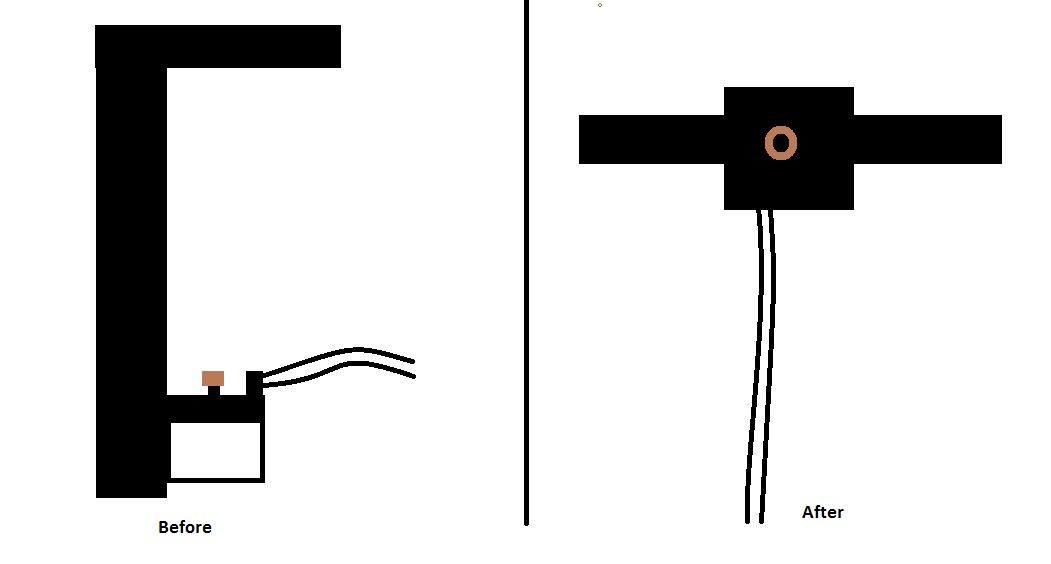 I can't be the only one to think of this, but I've only seen one website that has talked about this issue and thinks that the solution is a second gantry to follow the hot end. If you're interested, here's the link.

Are there any potential issues with this new setup? Though I would mount the servo above the cross beam instead of to the side so that there's full range of motion along the z axis. (sadly that thought came to me AFTER making the picture in paint)

Hanging up the Bowden system won't fix the problems with printing flexible filament: the filament will still press into the bends of the tube and thus lead to under extrusion. Another issue is, that the flexible filament can compress - and the longer way it has to the melt-zone, the more filament it can "store" on the way to it. These bunched up zones will release suddenly, resulting in pulses of high output and between those under extrusion.

Direct drive (like in a Prusa i3) is pretty much the only way to reliably print flexible materials. You could, with some engineering, move your existing motor to the carriage and turn your Bowden into a direct drive.

Not the answer you're looking for? Browse other questions tagged extruder mechanics hardware flexible or ask your own question.